The foresight of Alexander Tyler

In 1787 Alexander Tyler [b.1747, d.1813], a Scottish history professor at the University of Edinborough, had this to say about the fall of the Athenian Republic some 2,000 years prior:

"A democracy is always temporary in nature; it simply cannot exist as a permanent form of government. A democracy will continue to exist up until the time that voters discover that they can vote themselves generous gifts from the public treasury. From that moment on, the majority always votes for the candidates who promise the most benefits from the public treasury, with the result that every democracy will finally collapse over loose fiscal policy, (which is) always followed by a dictatorship."

"The average age of the world's greatest civilizations from the beginning of history, has been about 200 years. During those 200 years, these nations always progressed through the following sequence:
From bondage to spiritual faith;
From spiritual faith to great courage;
From courage to liberty;
From liberty to abundance;
From abundance to complacency;
From complacency to apathy;
From apathy to dependence;
From dependence back into bondage."

Number of States won by: Obama: 19 McCain: 29
Square miles of land won by: Obama: 580,000 McCain: 2,427,000
Population of counties won by: Obama: 127 million McCain: 143 million
Murder rate per 100,000 residents in counties won by: Obama: 13.2 McCain: 2.1
Professor Olson adds: "In aggregate, the map of the territory McCain won was mostly the land owned by the taxpaying citizens of the country.
Obama territory mostly encompassed those citizens living in low income tenements and living off various forms of government welfare..."
Olson believes the United States is now somewhere between the
"complacency and apathy" phase of Professor Tyler's definition of democracy, with some forty percent of the nation's population already having reached the "governmental dependency" phase.
If Congress grants amnesty and citizenship to twenty million criminal invaders called illegal's — and they vote — then we can say goodbye to the USA in fewer than five years.

Sounds very familiar in our country Malaysia ... doesn't it?
Posted by Geronimo at 4:56 PM No comments:

It is Sunday. Time for a church wedding. 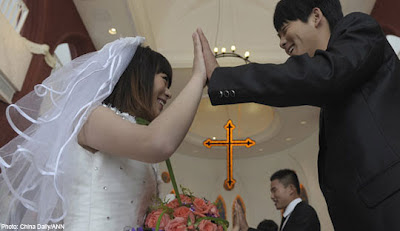 Although the Christian population is in the minority in China, churches and cathedrals nationwide have reported a boom in bookings, with some purposely courting nonbelievers by offering quasi-religious ceremonies.

"Until 2008, we weren't allowed to hold such weddings (for non-registered parishioners)," said Fan Guoxing, a pastor at Haidian Christian Church in Beijing.
"Now the rules have been relaxed, I'm officiating at about 40 a year, half of which are for nonbelievers."

Saturdays are the busiest, he said, sometimes with as many as eight ceremonies to handle.

At the other side of the country in Sichuan province, Xie Hongxia, a Catholic wedding planner for Chengdu diocese, estimated that about 90 percent of the 70 or so weddings held annually at the city's cathedral are for non-Christian couples.

Wang Manshu and Jiang Jin were married on Feb 12 at Haidian Christian Church, which is in the capital's Zhongguancun technology area.

"We were worried our booking would be rejected, so we were really happy when we got a positive response," said Wang, 35.

"Young people like us need a special (church) ceremony. Our hearts could be purified, and it helps us find a deeper connection."

The couple spent 6,000 yuan (S$1,182) on their big day, which included the cost of the venue, the pastor, decorations and choral music. It would have cost even more had they not arranged their own bridal stylist, photographer and cameraman.

"Traditional Chinese weddings are too complicated," Wang said. "Although expensive, the church was no fuss at all. We were briefed about what would happen during the 30-minute ceremony and didn't even meet the pastor until just beforehand."

According to tradition, the bride's father walked her down the aisle in front of 100 family members and friends, before Fan, the pastor, gave a brief sermon.

The couple exchanged vows, each time ending with an "Amen", and then joined to light a candle symbolizing their unity in marriage.

"It was an education for me," said the bride's 65-year-old uncle, Wang Tianyu, who said it was his first time in a church. "Young people are having a lot of quick marriages and quick divorces nowadays. Maybe a solemn church wedding will help them take marriage more seriously."
It was also a first for Zhang Xing, a guest of the groom who works for a Beijing pharmaceuticals company. He said he was nervous during the ceremony.

"I was uncomfortable," he said. "I wanted to smoke, then thought better of it and restrained the urge. At a Chinese wedding, people chat, walk around and make jokes about the newlyweds, but in church I had to watch my behavior and avoid embarrassing myself."

Churches across China have responded in different ways to accommodate their rising popularity among young couples.

Southern Cathedral, which is operated by the Beijing Catholic Diocese, slashed its charge for non-Christian couples to 3,300 yuan this year, down from 5,990 yuan in 2011.

The price cut was made because the clergy had attempted to make the weddings simpler and more frugal, according to Gao Baola, a wedding planner at the cathedral.

"There are no cameras, no makeup service and no red carpet," she said.

"Instead of fresh bouquets, we use silk flowers, as well as recorded choral music."

Xishiku Catholic Church, also known as Beijing's Northern Cathedral, requires non-Christian couples to have a civil-marriage certificate before they can book the venue. The price is 2,600 yuan, which includes decorations and, on Saturdays, a full choir.

Volunteer Zhou Fucheng at the church said the ceremonies generate much-needed income for the church, and added that even requests from people marrying for a second time may also be accepted if they can explain their case to the priest.

However, not all parishioners are happy about the their churches being rented out to nonbelievers.
"Some Christians have voiced their objection and believe we host the weddings of nonbelievers just to make a profit," said pastor Fan at Haidian Church in Beijing.

"In doing so, though, many more people get to know about our beliefs."

He explained that originally either the bride or groom had to be a practicing Christian for a couple to get married in the church. It was only later it was opened to all comers.

Ma Qing, 43, who was baptized in 1985 and works as a volunteer at Southern Cathedral on weekends, said she has an open mind about nonbelievers choosing church weddings.

"The church welcomes all who are interested," she said. "We greet newcomers and let them decide if they want to know more. Some were married as nonbelievers and were later baptized."

Whether the latest wedding fad leads more into the Christian religion or not, church phones are likely to keep ringing in the short term.

Mao Weiwei, 27, said she has seen countless white weddings in movies and TV shows, and was also impressed when she read about how one of her favorite singers, Christine Fan from Taiwan, got hitched in a church ceremony last year.

But it was not until she saw her non-Christian friend exchange vows with her "Mr. Right" in a church that she started to imagine it for herself.

"I never knew such a ceremony was available for nonbelievers in China," said Mao, an instructor at an English training center in Beijing. "Now I know, I can't get the idea out of my head.

"Traditional Chinese weddings are a bit too grand for me. I want mine to be perfect, celebrated in an intimate, serene and sweet manner."