Okay, so the Chinese (not those from Mainland China) are in the news again.  UMNO want their votes in the coming GE 13, but then, often than not, could not make up their mind the direction they wish to pursue.

But then, there is this Johari Ghani guy who said UMNO don't need the Chinese votes.


As for the Indians, what more can I say?  Read here.
I believe by now, many of us have already decided which party not to vote, and no prizes for guessing which one.﻿
Posted by Geronimo at 8:43 PM No comments:

This time, it is the Indonesians who want answers to shooting of their citizens

The fatal shooting of four Indonesians by the Malaysian police in Perak last Friday has triggered an outcry from the neighbouring country, reports several Indonesian news portals.

According to the Jakarta Post online, the deceased were allegedly members of the Batu Hitam (black clothes) gang specialising in the burglary of luxury homes in Penang.

Police had intercepted them around 3am while they were driving around the Taman Meru housing complex.

“After being chased by the police, the car stopped after hitting a cliff. The four passengers came out and opened fire on the cops,” the Indonesian Embassy in Malaysia was quoted as saying.

Anis Hidayah, the director of Indonesian NGO Migrant Care, has slammed the shootout as a violation of human rights and international standards.

“[Regardless of] whatever documents they had – or didn’t have – the incident which caused their death was a human rights violation,” Anis was quoted as saying by The Jakarta Post.

“International standards clearly stipulate that the police are not allowed to shoot anyone dead, not even a criminal,” she said.

Anis also flayed the Malaysian government for stating that the victims were illegal workers, saying: “[Their status] does not justify the shootings.”

Meanwhile, news portal Kompas.com reports that Mahfudz Siddiq, the chairman of Indonesia’s House of Representatives Commission I, has suggested the shootings were a “systemic act of terror” by Malaysia.

(Several news reports mention that five Indonesians were gunned down, although the official number is four, as confirmed by Indonesia’s Home Minister and the Indonesian Embassy in Kuala Lumpur.)

Mahfudz said that cases of Indonesian citizens killed in Malaysia due to police shootouts were frequent and none had ever been solved.

“Indonesia must take firm action against this,” he stressed.

Indonesian Human Rights Commission member Johnny N Simanjuntak has also called on the country’s leaders to verify Malaysia’s assertion that the four who were killed had been robbers.

According to Kompas.com, Johnny said the Malaysian police would always claim that any Indonesian citizen they shot dead were robbers – a claim that he said had never been proven.

“Last June, three Indonesian citizens accused of robbery were gunned down in Kuala Lumpur. Even until now, it has never been explained whether they were truly robbers or not,” he was quoted as saying today.

Riau Islands police chief Brig-Gen Yotje Mende confirmed that the Indonesians involved in the shootout last Friday have no criminal records in their reported hometown of Batam, Riaus Islands, according to The Jakarta Post.

“Many have asked us, but we don’t have such records of them,” he was quoted as saying.

But citing an unnamed Indonesian official, the news portal states that the four were illegal workers with criminal records in Malaysia.

Devi, the wife of one of the deceased, has also admitted to The Jakarta Post that her husband did not have a proper working visa.

She said he had been working on a oil palm plantation in Malaysia since 2006.

“He returned home once every two weeks. I know nothing about his life there but I don’t believe he was a robber,” she was quoted as saying.

Friday’s shootout is the latest in a series of police shootings of migrant workers in Malaysia in several months.

In June, another three migrant workers were gunned down by police, according to Indonesian news portal Jakarta Globe.

Email ThisBlogThis!Share to TwitterShare to FacebookShare to Pinterest
Labels: Crime

The power of words

I just received this video clip from a close friend and I thought it would be a good idea to share it with you.

Posted by Geronimo at 4:17 PM No comments:

As a Malay, I am trying to understand where I am now politically.  You cannot simply aske me to detach myself from Umno - the only political party I have known from the time that iconic word "Tanah Melayu" came into my consciousness.

Not Malaya (as we know it then) but "Tanah Melayu."

I remember it being spoken of reverently by my uncles and the older Malays as I sat and listened to them speak not of politics but of what the future will hold for them and the many other races that was already calling Malaya their home even then.

Let me explain. Today Malaya is called Malaysia. Somehow along the way from then to now, things have changed.

“Tanah Melayu” to quote the words of Tun Dr Mahathir Mohamad “belongs to the Malay race. Peninsular Malaysia was known as Tanah Melayu but this cannot be said because it will be considered racist. We must be sincere and accept that the country is Tanah Melayu.”

Mahathir said the Malay community may risk losing the country if the communities continue to identify themselves according to the country of origin … as it is an admission that they are immigrants in the country.

But how can the Malays lose Malaysia when it never belonged to them in the first place!

We Malays belong to this land called Malaysia – not the other way around.

‘There is no risk’

That being the case, no other community, no other people, no other race can take away Malaysia from the Malays – not when these non-Malays have pledged themselves to belong to the same Tanah Melayu.

So Umno really has nothing to do if it says that its work is to save Tanah Melayu for the Malays.
The Malays have never risked losing the country – it is the country that risks losing the Malays, the Chinese, the Indians, its Orang Asli, the Dayaks, Ibans, Kadazans…and all those who have called Malaysia their home.

The very people that helped build Tanah Melayu into what it is today – a multi-cultural, multi-ethnic, multi-religious community comfortable in its own identity and trying to move forward as one people in the global community that we are all part of.

That is why as a Malay I am trying to find myself politically.

In truth the decision has already been made for me.

Let me share this verse by an 18th century Quaker missionary Stephen Grellet, who said: “I expect to pass through this world but once. Any good, therefore, that I can do or any kindness I can show to any fellow creature, let me do it now. Let me not defer or neglect it for I shall not pass this way again.”

So to Umno I say this: This Tanah Melayu belongs to all who want to call it their home. Begone!
Posted by Geronimo at 3:24 PM No comments: 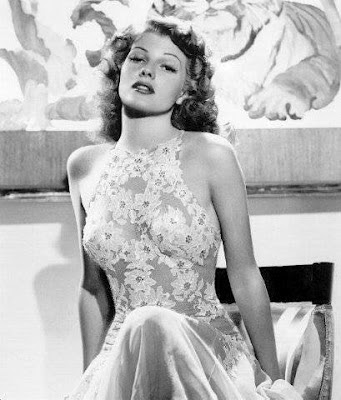 Back in the 50s and 60s, when I was too young to know the who's who of Hollywood stars, my trips to the cinemas were primarily to see movies starring famous actors of the time.  By chance, the producers of the shows always have the penchant to cast lovely actresses alongside these actors.  That was how I gradually came to know names such as Elizabeth Taylor, Ava Gardner, Audrey Hepburn, Natalie Wood and Rita Hayworth, to name a few.
However, some bright spark, whom I believe has nothing better to do on a Sunday, pieced together movie shots of Rita Hayworth dancing to the Bee Gees', 'Staying' Alive'. This lovely actress who passed away in May 1987 at the age of 69, had worked alongside famous actors such as Fred Astair, Yul Brynner, Glen Ford and Stewart Granger.
What is interesting to note about the video is that many of the 50s dance movements are in sync with the disco beat of Stayin' Alive, a 70s disco dance music
ENJOY!

Posted by Geronimo at 6:04 AM No comments: