'ADIOS' is now a dirty word?

Upon the death of PAS Spiritual Adviser, Haron Din, Jeff Ooi of DAP tweeted the following line, 'Adios Haron Din.  Let there be peace.'  Immediately, there was an uproar accusing Jeff Ooi for being rude to Islam, etc.  He has since been told to 'surrender' himself to the authorities by the IGP and has willingly done so.  After four hours of questioning by the police at the Penang northeast police headquarters, he has been released.

I am at a lost.  Do these people understand the meaning of  'Adios'?  It simply means 'Goodbye' in Spanish.  If they don't know, why didn't they at least google for the meaning instead of jumping the guns?  Or are they anti-Spanish?  This is the result of a mediocre education system.

Now if  'Adios' is deemed to be a bad word denoting disrespect, rude, uncouth and callous, then they might as well consider the following words to be haram too, all which mean 'Goodbye'.

Perhaps these two musical videos can illustrate the usage of the word.

What Jeff Ooi has tweeted is totally pale in comparison with the antics of some of the UMNO leaders.  Here are just some examples. 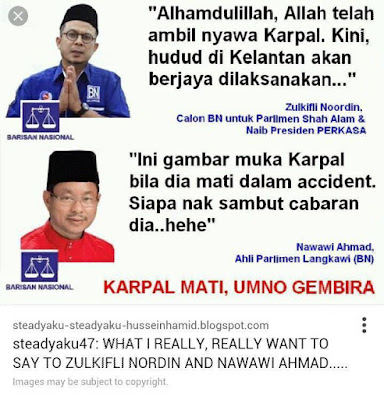 Posted by Geronimo at 4:08 PM No comments: