250,000 at the Red Shirt rally. Must be the figment of someone's imagination.

Annuar Musa claimed that there were 250,000 present at the Red Shirt rally yesterday, but this report proves otherwise. 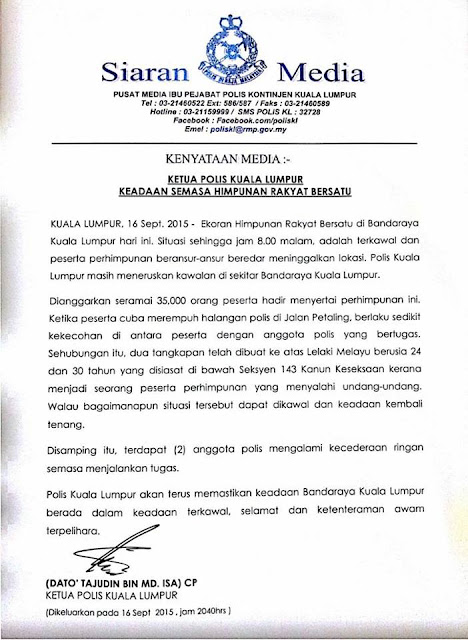 DEAR MALAYSIANS ...wherever you are..

Many of you are probably in the same frame of mind as I am now..feeling nervous and jittery about September 16.

I have been told about people stocking up on food. Reminders not to be in the City tomorrow. That there will be roadblocks ...So, instead of our Malaysia day being a day for celebration, for taking our families out for meals, to go to the malls...to do window shopping...in short to enjoy the holiday ..we are of two minds about whether to shut ourselves in the house, or risk getting into traffic jams and confronted by roadblocks.

HOW ON EARTH HAVE WE COME TO THIS SITUATION ?

The emergence of the divisiveness of the " US " and "THEM" & the " WE " and "THEY" syndrome.
If you dare voice something not seen to be aligned ,wth what is determined "acceptable" ,however rational and correct what you said may be, it will be DEEMED as " in opposition " and therefore " against" whoever it is directed to.

THAT has now snowballed into groups of "THEM " and "US"...made worse by racial undertones and insinuations.

Can constructive criticism and voices from the heart NO longer be tolerated ? Must there always be the cattle herd mentality, that follows blindly without rationalizing and understanding of all things before us ?

Must we propagate a new culture of personality cults, and relegate the Nation to a low priority ? Must it always be "either you are with us or you are against us "...reminiscent of Bush , who eventually triggered the havoc that continue to plague Iraq ...and the neighbouring countries.

When people decide to demonstrate through group action, it is vital that they fully understand WHAT EXACTLY it is that they are trying voice out, and demonstrate against..

It SHOULD be about issues that are important to the country and to the vast majority of Malaysians..
CERTAINLY NOT merely in retaliation to something others did...and worse still to use the race card as the excuse.

We are living now in confusing, worrying and troubling times..

And there are still those who seem rather callous about calling for a halt to actions which can only worsen the situation.

Leadership which calls for calm and reason to prevail...strong enough Leadership to remind everyone to preserve peace and respect each other.

Its not the colours of the shirts of the groups that matter or the manner in which muscles are being flexed to show the difference between "Them " & " Us"..

It is the VALIDITY and the CREDIBILITY of the RATIONALE for the group action.

Some said it is about " permainan politics"..." the political GAME"...which I am NOT capable of understanding.

I confess ..I DONT KNOW HOW TO "PLAY" POLITICS ..AND I NEVER PLAYED "POLITICS"..

POLITICS is much too serious to subject it to the frivolity equal to playing some game.

We need politics of DEVELOPMENT OF NATION AND COUNTRY..POLITICS TO MOVE MALAYSIA FORWARD ...AND POLITICS TO ENSURE MALAYSIA SURVIVES WELL IN THE HIGHLY COMPETITIVE REGIONAL AND GLOBAL ENVIRONMENT..

RATHER it should be POLITICS OF OUR MALAYSIANS TOGETHER, FOR NATIONAL INTEREST.. the POLITICS THAT FOSTER AND FORGE UNITY AND UNDERSTANDING.

A government holding a protest rally? This is real weird ....

You know what. This is the first time in the history of our country or for that matter in any country, that a government has to hold rallies to protest against the people who want an end to corruption and a demand for fair elections, from the same government.
Am I missing something here??????

And to lead the charge is none other than you know who from the UMNO government.  If this is not weird enough, he is even showing the ISIS one finger sign.  What they will do to get the attention. 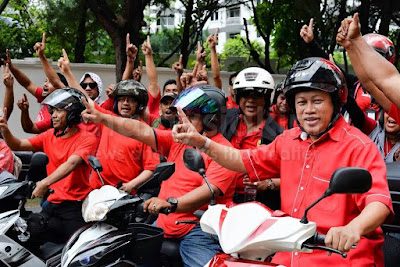 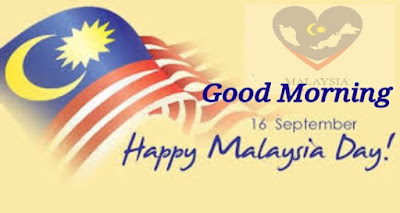 This is how a kafir PM of a kafir country , who had been kicked out, reacted to his removal.

No fuss. No sacking anybody. No blaming the illuminatis, the yahoodzah et al.

And no shouting, no screaming, no red shirt rally, no decree from the Priest saying it is haram to do so, no hiding, no back-door arrival, no nothing.

He just stood there, stone-faced and said bye bye.

Tony Abbott delivers his final statement as Australia's Prime Minister after being stripped of the prime ministership.

Thank you for being here.

This is not an easy day for many people in this building. Leadership changes are never easy for our country. My pledge today is to make this change as easy as I can.

There will be no wrecking, no undermining and no sniping. I've never leaked or backgrounded against anyone and I certainly won't start now.

Our country deserves better than that.

I want our government and our country to succeed. I always have and I always will. I've consistently said in opposition and in government that being the prime minister is not an end in itself; it's about the people you serve. The great privilege that I have had is to see the wonder of this country like few others. And I want to thank the Australian people for giving me the honour to serve.

Yes, this is a tough day, but when you join the game, you accept the rules. I've held true to what I've believed and I'm proud of what we've achieved over the past two years.

The Red Shirts 'Maruah' rally, much ado over nothing? 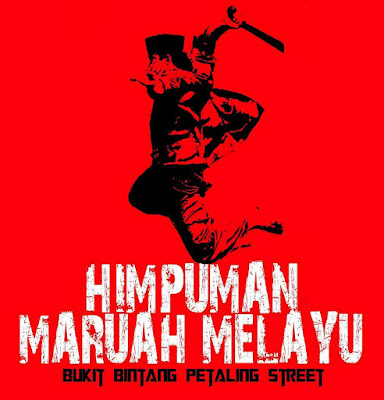 I am trying hard to look at the positive side of things especially with the dawn of the Sept 16 rally by the Red Shirts. I may be wrong, but do correct me if I am, that nothing will come out of the Sept 16 gathering.
Basically, I look at it as nothing more than a 'kiasu' syndrome that they just simply want to outbeat Bersih 4.0 in numbers more than a 'save the Malay maruah' idea. If it was the latter, they should actually train the barrel of their guns at Najib because this fella is currently doing a good job in the 'maruah' area.
As much as a lot of sabre rattling have been going on for almost a week now, it will continue to be just that ..... more sabre rattling. The reasons being ...
1. If they had intended to start a riot and cause harm to members of the public, they would not have openly announce their intentions, and days ahead too.
2. By rioting, they may cause an international incident which Najib can ill afford. Would they know the difference between a Japanese, PRC Chinese, Korean, Taiwanese, Vietnamese, Thai, Filipino Chinese, Hongkies to a local Chinese? If one of them is affected, especially those from the PRC, the roof will just cave in onto these morons.
3. The riot would also cause more foreign investors to pull out of the country and invest elsewhere. Already, there are signs that many such companies have left Malaysia. How much more is the govt prepared to lose.
4. The ringgit is now at RM4.36 level. Any incident could cause the ringgit to drop sharply to even RM5.00 which is not impossible.
5. The Red Shirt sabre rattling, as far as I can see, is to send out a warning to Bersih 2.0 not to organise further rallies, in which Bersih 5.0 was talked about should Najib refused to step down.
6. Many Malays working in Chinese companies may even lose their jobs which at the moment is most unlikely. But would the Red Shirts want to take a chance?
7. Unlike May 13 (in which I was nearly killed, not by the Malays, but by the Chinese, but saved by the Malays), today's situation is a whole lot different as it involves a sizeable chunk of the Malay population on the side of right.
8. Unlike 1969, we are now globally connected, and you know what that means
If at all Najib does not want to step down due to the 1MDB scandal, we citizens can do our part by coming out in full force for GE14 to exercise our rights.
Short of the above, might as well stay indoor due to the haze.
Posted by Geronimo at 4:05 PM 2 comments: