Aiyoh, you women in MCA! How can you judge a book by its cover?

"Now that Indonesian maids are not coming, can Chinese maids take their places?"

This has become another heated topic of discussion in recent days after the abrupt change of the name for influenza A(H1N1) to swine flu by some ignorant people.

Several years back, when Chinese maids were keen to take up jobs in Malaysia, our government stopped them. But then when the policy was liberalised and the government said they could now come, Wanita MCA was fast to jump out and block the way.

Let's put aside whether Chinese maids would actually be bothered about the meagre RM600 monthly pay here, given the phenomenal growth of the Chinese economy; if we are allowed to hire maids from countries with vastly different cultures and languages such as Indonesia, Cambodia and Vietnam, why shouldn't Chinese maids be allowed to work here?

Wanita MCA claims that Chinese maids have a tendency to seduce their male employers and will likely destroy the otherwise happy families of Malaysians.

Such a presumption has undoubtedly branded "Chinese maids" as being voluptuous, flirtatious and morally depraved, and must be avoided by all means.

Such a presumption has also labelled Malaysian men as an irresponsible and licentious lot, who could be hooked away by the Chinese maids at home.

Such a hypothesis is unfair to both Chinese women as well as Malaysian men.

While there might be Chinese women soliciting for sex while working here, destroying the families of Malaysians, they may only constitute isolated cases.

Even if there are Malaysian men forsaking their spouses for Chinese women, they are also but the minority.

Squarely rejecting Chinese maids based upon such isolated cases is not only unconvincing, but also narrow-minded.

If Wanita MCA claims to represent Chinese Malaysian women, they should have a more macroscopic and positive attitude on this particular issue.

Instead of seeing Chinese maids through tinted glasses, perhaps it should organise more learning courses and events for women, instilling in them the importance of establishing self-confidence and learning to be independent.

Women without confidence or unwilling to learn may see their husbands lured not only by Chinese maids, but Indonesian maids as well.

Moreover, marriage is established upon the foundation of mutual trust and respect. If a woman is mentally independent and knowledgeable, her other half will naturally respect her and refrain from indecent ventures.

In the unfortunate event that the other half is a flirtatious man, the marriage will not last even without a domestic help at home, for he can always cruise for women somewhere else.

Every family has its own requirements for domestic helps. Some may want maids who can speak the same language as them. Now that the government has flashed the green light for the recruitment of Chinese maids, Malaysians should be given the opportunity to make their own choices!

Posted by Geronimo at 7:59 PM No comments:

Email ThisBlogThis!Share to TwitterShare to FacebookShare to Pinterest
Labels: Social

Scholarship based on total merit? 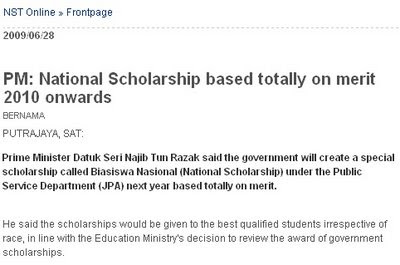 Shall I cheer or jeer at this news?
Posted by Geronimo at 8:58 AM No comments:

Kudos to Tan Sri Khalid and his team. The Selangor government donated RM4m to four Chinese schools as reported in the Oriental Daily. 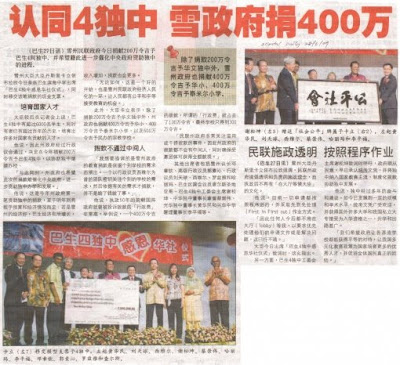 Posted by Geronimo at 9:35 PM No comments:

Malaysiakini recently reported the findings of the three doctors of HKL with regard to Saiful's anus : “No conclusive clinical findings suggestive of penetration to the anus and no significant defensive wound on the body of the patient (Mohd Saiful)”

1. Saiful was not sodomised by Anwar or anybody else.

2. Saiful’s arsehole is too loose or Anwar’s dick too small, or both, for the doctors to have recorded “conclusive clinical findings suggestive of penetration”.

The simpler explanation is usually the likeliest.

ON ANOTHER note, the HKL specialists could do with some improvement in their English.

ALSO, maybe we should get the doctors to swear on the Quran for good measure.

I mean, that’s how we do it in Malaysia, kan?

Posted by Geronimo at 1:30 PM No comments:

MCA, do you know that Zambry has fixed you good and proper?

According to the online news report, Zambry Abdul Kadir, the Court-appointed MB of Perak, had in February promised that his BN state government would continue the people-friendly policies implemented during Pakatan’s 10-month rule.

Well, that was a case of cakap ta’serupa bikin,because Zambry’s government has now scrapped (or put on the back burner, meaning that’s as good as scrapped) many of the Pakatan Rakyat’s people-friendly policies. I shall only point out a few in this post, as follows:

· 3,000 applications from residents of new and planned villages to convert their land titles from leasehold to freehold cancelled.

Looks like the MCA and Gerakan Party will be very very dead in Perak in 2013. I feel sorry for these two Chinese-based parties. As we all know, the MCA has been continuously undermined by UMNO, sometimes deliberately (inclusive of the 'divide & conquer' use of Gerakan in some cases) and sometimes indirectly (as in this issue), but in each and every case totally without any regard for MCA’s political credibility in the latter’s constituencies.

· The open-tender policy for approving government contracts, land and logging concessions reverted to the old system of closed tenders.

· The process of legalising the 134 new villages put on hold.

Note: I have identified MCA as the real political loser. The relationship of the Gerakan Party (with Koh TK as its president) to UMNO may be considered as the equivalent of PAS non-Muslim branch wakakaka.
Posted by Geronimo at 1:17 PM No comments:

If there is one thing that will put a smile on your face on a Monday such as today, then it must be Elvis going Punjabi by singing "Jailhouse Rock" to a Bhangra rhythm. Thanks, Antonio, for sharing this hilarious video with us.
Posted by Geronimo at 9:36 AM No comments:

Posted by Geronimo at 6:44 PM No comments: