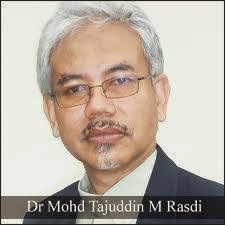 Of late, many so called ‘political leaders’ and individual Malays of questionable repute have been urging not only Chinese, but Malays, Indians, Christians, Muslims, Buddhists and others to ‘leave Malaysia’ because of the dissatisfaction over the Election Commission’s (EC) failure to be an entity of integrity as a fair referee in a political competition.
It has taken all my personal strength and professional standing as an academic and as an acting civil servant to restrain my emotion and really give these people ‘a piece of my mind’. If I were a retiree, I would really lash out at these people in my Penang colloquial style lingo!
But alas, I am a fully active civil servant and an established academic with an honest and reputable name. I am not like Ibrahim Ali who shows himself to be from a poorly developed cultural upbringing who knows nothing but spout venom to achieve his own personal game. He is not interested in the well-being of Malays, only himself.
I have also none the luxury of a Zulkifli Noordin who masquerade as an ‘Islamic Warrior’ using the Quran not to please Allah the Most Beneficient, but to fulfill his own agenda of pleasing others who can give him material honour. He has forgotten or chooses to forget what the Quran says about selling the religion for a small gain.
If these two utter such words, I would have not paid much attention for they are clearly nobodies and need to constantly shout, rant and spite in order to be noticed. But when national leaders or the equivalent thereof ask Malaysians to leave their homeland, I feel that someone must remind these leaders politely in the old Malay kiasanor sindiran manner.
I will tell Malaysians how my father runs his family and how I fared with mine. My father was an ordinary police constable serving in the police force for 30 years. His number was 'Mata Mata 28847'. In honour of him, I have committed this number to memory ever since I could recognise them.
My father passed Standard Three King Edward and speaks fluent English. I never get scolded in Malay but in English. My father displayed an exemplary style of leadership that would shame our present ministers.
On one occasion, my brother was offered a job as a teacher, a dream of any poor Malay parents rearing six children on a meagre salary. But my brother did not want this job and refused to report for duty. My father was angry but he never uttered the words of ‘get out of this house’. Never. After that my brother chose to live in the storehouse in the police barracks and slept there with my father’s old Vespa.
Later in life my brother became a weather technician which he enjoyed immensely. He helped my father and me financially later on in life.
The next case was my eldest sister. She was pretty and bright but was forced to care for my other invalid brother, a victim of muscular dystrophy. My parents did not have the heart to send him away but because my mother suffered from anxiety disorder, my sister had to bear the brunt. When my sister rebelled and took it out on my mother, again my father said a few choice words but... Never... Get out of this house! Never.
Almost crossing the line my father laid down.

Fast forward 45 years, I stand arguing with my eldest daughter about some matter. I shouted, “I do not want to see your face, get out to Nenek’s house.”
For clarification, Nenek’s house is also my other house for we own four houses within walking distance of the area. So in effect, I was not ‘throwing my daughter out’ but telling her to go to my other house! But she interpreted it to mean that I was throwing her out and that nearly cost our family’s unity.
After the storm was settled by my wife, I sat alone and admitted to myself that however hurtful my daughter’s words were, she was but a child, but what was my excuse? I had almost crossed the line that my father laid down.
Now my daughter and I are closer than ever. She rewarded me with a beautiful grandson, the apple of my eye. And she became an academic bent on fighting racism and liberalising the idea of Islam in society. Double rewards! I could not be a happier man. But I almost lost everything with the utterance of those despicable words... ‘Get out of my house!’

Upon reflection, I wished that my father was still alive. He would have made a better minister for Malaysia, a primary third grader who speaks Queen’s English, quiet but can put you in stitches with his jokes... and above all gentle with all the womenfolk... and of course very stern with his sons who are tasked to take care of the family.
I, on the other hand, would probably never make a good minister of Malaysia for I almost failed the test. Perhaps that is why I remain at best an academic of many books and writings and a peddler of the quill to prick the conscience of society.
And thus the lesson here is that we are all one family. One Malaysian family. We Chinese, Indians, Malays, Dayaks, Kadazans. Yes, we Christians, Hindus, Buddhists, Muslims and others. We need responsible ministers as our ‘parents’ to be listening and choosing the wisest words to say not the first words and thoughts that come to mind in a heat of anger.

The Malay proverb goes terlajak perahu boleh diundur tetapi terlajak kata... We may lose our family of Malaysia if those elected to the office treat their words callously. For me, the values of Islam guide me as a Muslim and the Rukunegara of kesopanan dan kesusilaan as my signpost of matured citizenry in Malaysia.
A family is a precious small nation - the first nation. A caring parent is all that it needs. A nation is a big family - the real nation. For a big family we must have a bigger caring minister.
[PROF DR MOHAMAD TAJUDDIN MOHAMAD RASDI is a 23-year veteran academic and teaches architecture at Universiti Teknologi Malaysia. He specialises in mosque and Islamic architecture particularly that which relates to Malaysia using a hadith-based and socio-cultural approach in order to create the total idea of built environment suited for a whole social structure.]
Posted by Geronimo at 7:04 AM No comments:

HERE'S WISHING ALL MY CHRISTIAN FRIENDS A HOLY AND BLESSED EASTER. ALLELUIA ... HE IS RISEN! 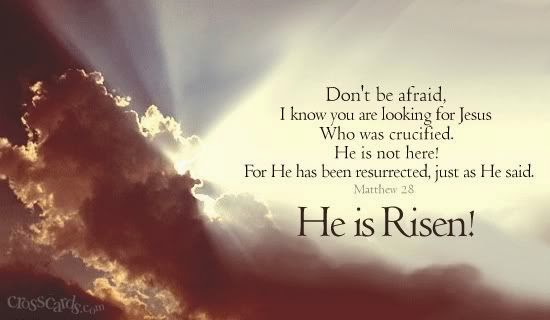 Posted by Geronimo at 5:48 AM No comments: 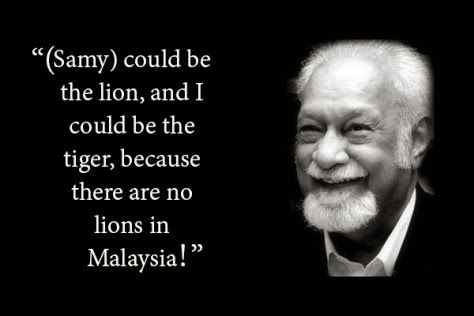 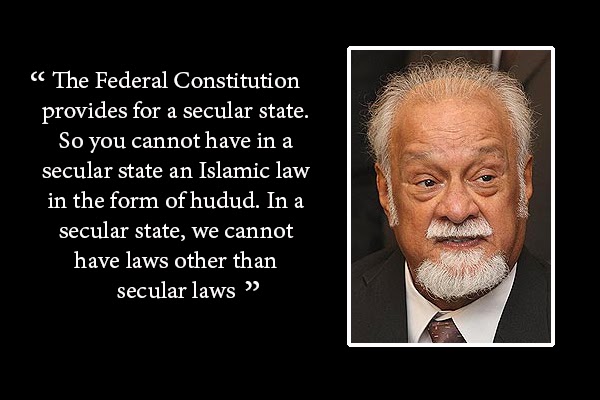 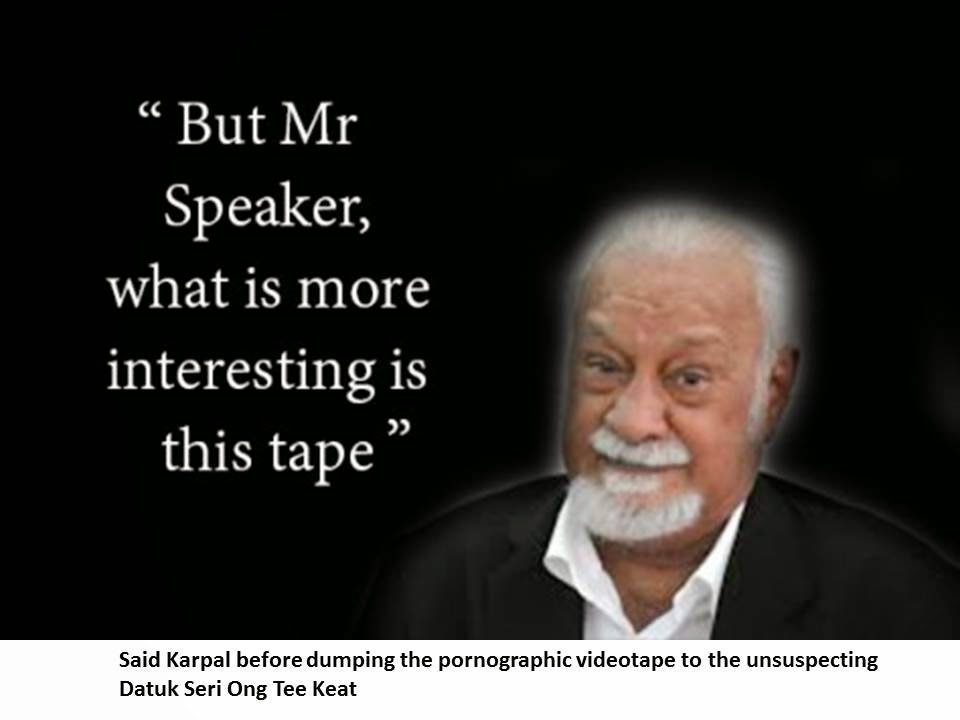 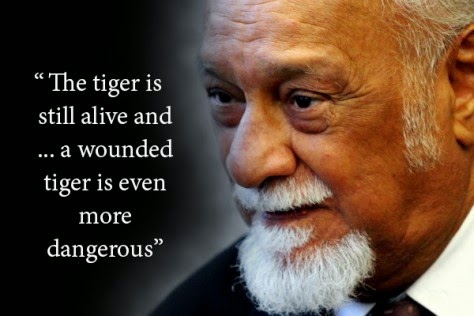 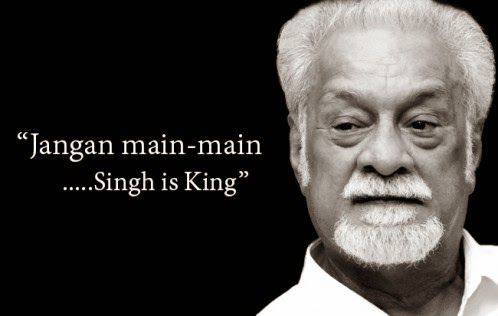 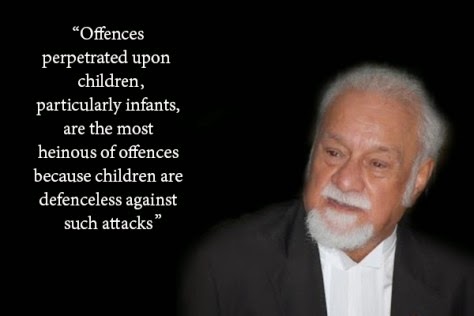 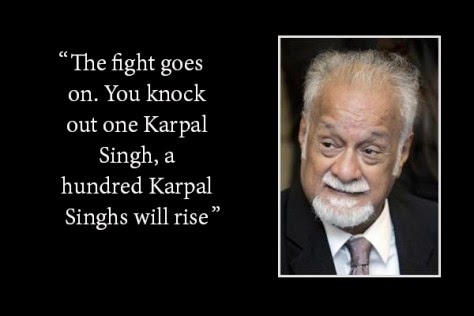 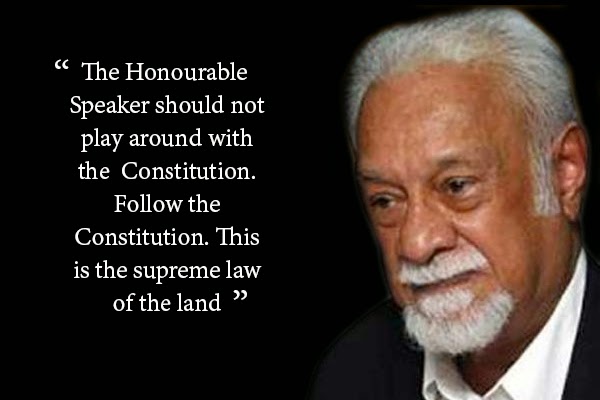 Posted by Geronimo at 5:32 AM No comments: