Is there a different form of Islam practised in Southern Thailand to that of Malaysia?


The above photographs were taken in Southern Thailand where Buddhist monks regularly pray alongside Muslims in mosques.

Will someone please grow up.
Posted by Geronimo at 5:18 PM No comments:

To our Muslim brethren, you are more than welcome to pray at our place

Yesterday, I came across this news article in the Malaysiakini that a group of Buddhists monks used a surau for meditation.  Some said they were Tibetan monks, some said Malaysian monks but the person who allowed the surau to be used was a Singapore Muslim.  Without haste, as expected, the usual "The act has not only hurt the feelings (of Muslims) but also insulted Islam" was made.  Now before anyone goes overboard with this incident, let us reflect how other religions accommodate Muslims in their hour of need.

And how about this article here about a church in Scotland opening its doors to the Muslim who had to pray in the rain and wind.

These are just two mere cases of how Christians have shown to be charitable to Muslims.  There are many more if one cares to surf the net.  I don't believe I have heard any Christian, even from the Ku Klux Klan (the right wing Christians), to utter a statement like,  "These acts have not only hurt the feelings (of Christians) but also insulted Christianity."

Ramadhan may be over, but I hope that there is still a sense of love and charity in the hearts of our fellow Muslims to come to the aid of our brethren from other faiths when in need.

So, to my Muslim brethren, the next time if you found that you do not have a place to pray due to unforeseen circumstances, do visit our local priest or pastor for assistance.  They will be more than happy to accommodate your request unconditionally.
Posted by Geronimo at 8:03 AM No comments:

The Thai mother-in-law walks into her daughter's new house in the village and finds her European son-in-law furious and packing his suitcase.

Mother : "What happen?" she asked.

Son-in Law : "What happened? - I'll tell you what happened! I sent an e-mail to my wife Kung saying that I was coming home from  England today.
I got here and guess what I found? My wife, Kung, yes your daughter, in our bed with a Thai gentleman! This is the end of our marriage and I am leaving Thailand forever!"

Mother : "Relax, relax!" says mother-in-law, "Mistake, sure! Something is not right about this story. Kung never would do something so stupid!
Wait... I check to see what really happen."

One hot afternoon, a 70-year old farmer decided to go to the river to fetch himself a pail of water for his cows to drink.  As he approached the river, he heard sounds of giggles and laughter coming from the river.  As he got nearer, he saw three beautiful maidens taking their bath in the water, stark naked.  One of the girls saw him and immediately shouted at him that if he did not stop prying or go away, they would report him to the police.

The farmer calmly told them, showing them his pail, "Not to worry, ladies, I am only here to feed the crocodiles".

Now you imagine the rest. 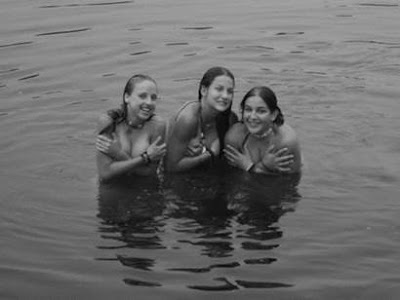 Posted by Geronimo at 7:54 AM No comments:

Cynthia called in for questioning under the Sedition Act, but interviewed by an officer from 'Unit Curi Kereta"?

This is really amusing.  The police officer who questioned Cynthia was not only not conversant with the case, but was from a unit called, "Unit Curi Kereta".  Latheefa Koya, the lawyer for Cynthia said with a tongue in the cheek, "... this is not even an issue about curi submarine."

Posted by Geronimo at 2:08 PM No comments: