FOX News can confirm that the first female pilot for the UAE served as the team leader in the U.S. led coalition airstrikes against ISIS in Syria.

Major Mariam Al Mansouri is the first woman to join the Emirati Air Force—a dream she has held since she was a teenager.  She graduated from the academy in 2008 and now serves as a squadron commander, piloting F-16 fighter jets.

Al Mansouri, 35, is the first woman from an Arab nation to fly a mission-- dropping bombs on Sunni terrorists.

The United States and five Arab allies, including Saudi Arabia, Jordan, Qatar, Bahrain and the United Arab Emirates, launched a series of airstrikes against ISIS targets inside Syria. 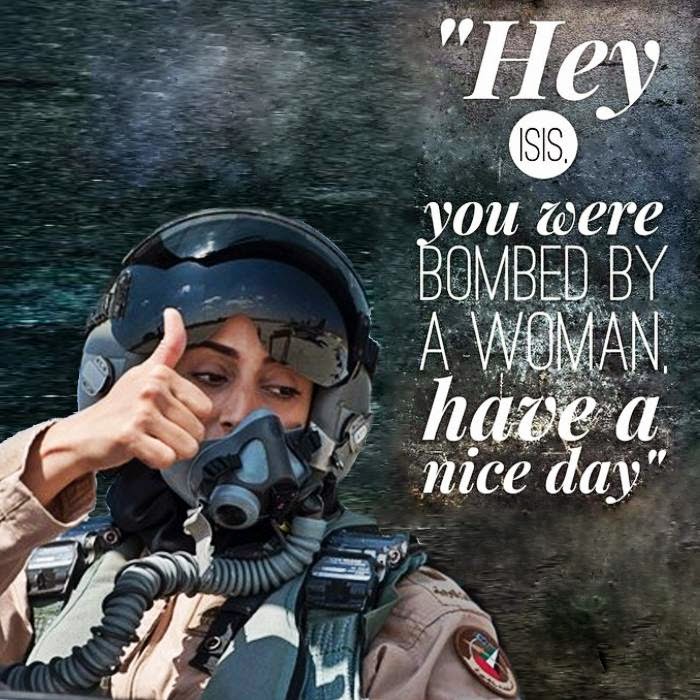 Intern camps for the Muslims in the States?

I was just thinking, my two cents worth.  During the start of World War II, especially after the bombing of Pearl Harbour by the Japs, all Americans of Japanese descent were rounded up and sent to intern camps all over America, the largest one being in Wyoming.  The Americans could not be bothered whether these citizens were young, old, babies, the sick, women or children, they were rounded up and housed away in intern camps and it was noted that the number of people involved were between 110,000 to 120,000. Many Americans decry this act by President Franklin D Roosevelt as they could vouch that the Japanese were as loyal as any American could be since the majority were born and bred in the States. True enough, as the war dragged on, many youths from the camp volunteered to join the US Armed forces to fight the Japanese.

Fast forward to modern day.  Muslims have encroached into almost every aspect of the American way of life and many of them have blatantly and openly vow to destroy the very same country who provided them sanctuary.  If that is not bad, they made it clear that they would not follow the constitution of the United States but only that of the Quran.

Now which is worse, the Japanese Americans in the 40s or these Muslims in 2014.

The Americans should have started to build intern camps and have these people put away till the militant problem is solved.  Now that the US have launched a full air strike this morning, how sure are we that the radical cells in the States have not been activated to take revenge?
Posted by Geronimo at 2:39 PM 2 comments: