OMG, this is hilarious

A farcical look at Malaysian, er I mean BN, politics.

Posted by Geronimo at 7:58 PM No comments:

What was UMNO thinking?

Knowing how volatile the situation was on polling day, UMNO inadvertently had put the lives of these Banglas in danger by getting them to vote.  I dread to think what would have happened had some untoward incident occur with these Banglas especially when the rakyat were in such a state of anger and frustration?  To win votes through illegal means is one thing, but to put the life of another human in danger is totally despicable.  UMNO said the Opposition could not substantiate the claims of foreigners voting in our general election but with these videos, do we need any other explanations?  Of course, UMNO can counter-claim to say that the Opposition hired actors to create a 'sandiwara', but we know the whole story, don't we?

The CNN news that ASTRO blotted out

It was a good thing that this part of the news which was censored, was captured by someone in the UK and then posted on YouTube.

THIS WAS WHAT TOOK PLACE AT the polling station in Lembah Pantai :


(I) KTM asked Counting Agent TO LEAVE the room.
(II) Counting Agent refused to leave. Wakil Calon argued with KTM until KTM relented
(iii) FRU arrived.
(iv) Car arrived but stopped by a crowd of people. People from Bangsar also rushed over.
Attempt to steal Nurul’s victory
Perhaps the most brazen attempted rigging at this election was the onslaught on Nurul Izzah’s Lembah Pantai seat. Not only was the bribery rampant, but as the count was being finalised in her favour that evening, the Election Commission officials came up with an extraordinary request.
They needed everyone to clear the count, so that they could take a ‘rest’! The 15 PKR observers refused to accept the proposal and stayed on. Shortly after a car drew up outside the count ing centre stuffed with ballot boxes inside! The Election Commission officials attempted to force this late entry of extra mystery votes into the count!


A human barricade prevented the ballot boxes from being illegally introduced at this late stage, which Federal Reserve Unit officers attempted to disperse. The people refused to leave and the ballot boxes are still the in car and were not were not allowed into the count.

Blocked by public. Nurul has been officially declared the winner thanks to the actions of the people who refused to allow their rights to be violated. For everyone's info, all the ballot boxes marked
'120' were meant for the Bukit Bintang
Parliamentary seat!  So, what in the world were
they doing in Lembah Pantai or couldn't the
officers read numbers.  Even at cheating the
EC was such a novice.  At least remove the
number tag so as to make it less obvious.  Now
everyone knows.

Posted by Geronimo at 7:07 AM No comments:

Now, we may have got the White House attention

Frustrated Malaysians flood White House site to complain of polls fraud
Malaysians have complained to the White House’s online petition site about election fraud in Election 2013, drawing more than 222,000 signatures within a week to become the site’s second-most popular issue, according to the Associated Press.
US President Barack Obama’s online petition page requires just 100,000 signatures for an official government response.
According to AP, the Obama administration’s “We the People” site was started in 2011 as a project in open government for the Internet age.
Though clearly intended for US citizens, the guidelines on gathering online signatories remain broad enough to hearten activists overseas who — frustrated with their own governments — hope to raise the international profile of their cases, according to AP.
The site does not ask for one’s nationality.
Individuals only need to be 13 or older and have a verified email address to create an account to initiate a petition or sign one.
The White House has said it will give equal treatment to petitions from overseas.
The US government has not yet responded to the Malaysian petition.
Any hopes for US condemnation of the election results evaporated this week when the U.S. State Department recognized the polling results, while acknowledging allegations of irregularities, according to AP.
The petition “spoke out the dissatisfactions to the international communities successfully,” virologist and the petition’s apparent organizer, Kuan Ping Ang, said on her Facebook page as reported by AP.
Barisan Nasional (BN) won last week’s polls but lost the popular vote stakes to Pakatan Rakyat (PR).
BN won just under 47 per cent of the votes while PR parties scored over half of all votes.
Datuk Seri Anwar Ibrahim and PR parties have organised two mammoth rallies - in Petaling Jaya and Penang - this week to protest the election results which they claimed was rigged.
PR parties have complained about irregular voting patterns, suspicious handling of ballot boxes and other issues with both DAP and PAS mulling election petitions to contest the results.
PR officials say they are disputing up to 29 election results and the rallies, which began in Selangor last Wednesday, is set to continue with the next one in Perak today. 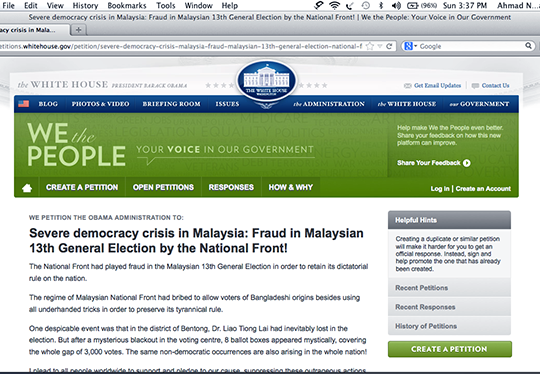 Here's wishing you much love and a very Happy Mother's Day.

Posted by Geronimo at 6:17 AM No comments: