Ever since the ruling on the 'Allah' issue by the Court of Appeal in October, the 18 and the 20-point agreements with Sarawak and Sabah have once again been brought to the fore front in our national discussions.

But what was the role of the Cobbold Commission insofar as the two agreements are concerned.

The Cobbold Commission, was a Commission of Enquiry set up to determine whether the people of North Borneo (now Sabah) and Sarawak supported the proposal to create the Malaysia consisting of Malaya, Brunei, Singapore, North Borneo, and Sarawak. It was also responsible for the subsequent drafting of the Constitution of Malaysia prior to the formation of Malaysia on 16 September 1963. The Commission was headed by former Bank of England governor, Lord Cobbold. 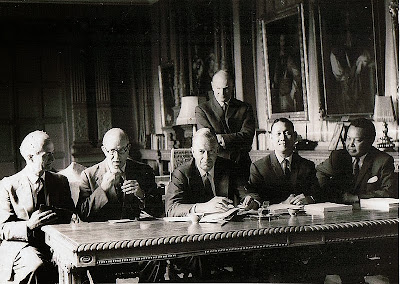 The above photo shows the signing of the Cobbold Report of the Commission of Enquiry, North Borneo and Sarawak, at Knebworth House, London on 21 June 1962. The Commission comprises of five members, chaired by Lord Cobbold, a former governor of the Bank of England, its members comprises of Dato' Wong Pow Nee (second from right) and Encik Mohd Ghazali bin Shafie (first from right), representing the government of Malaya, while Sir Anthony Abell and Sir David Watherston, the representative of the British government. Mr. H. Harris acted as the Secretary.

The Sabahans and the Sarawakians want a review of the agreements but why is UMNO Baru shying away from it?
Posted by Geronimo at 8:38 AM No comments: