This is what I think of you, Lim Kok Wing.

Mohamed Mahathir blogged :
A friend visited me in my office recently. I had helped him a lot when I was PM not with money or jobs, but by smoothening bureaucratic processes in the way of his projects. As a result he became a very successful educationist and was able to expand overseas. I regarded my help as essential as the bureaucrats can be unnecessarily dilatory or even obstructive. I do this for everyone and they are all very grateful. My friend was especially grateful.
Off and on he would drop in my office to discuss current issues. He worried about Najib’s Government policies and performance. He urged me to do something.
But when he dropped in this time he seemed somewhat changed.
He kept on urging me not to “attack” the PM. I explained why I am doing so. But he persisted in urging me to desist from my efforts at questioning the leadership regarding the current financial scandal.
He warned that if I continue I would lose my legacy. I told him what people think of my legacy, if there is any, is not important. I am concerned at what is happening in the country. Our good reputation is being eroded.

He repeated several times that I would lose my legacy. I really appreciated his concern. He is a friend and I felt he cared for me.
We parted as friends.
But now I understand better why he talked about my losing my legacy. He has been given the task of demonising me, of destroying what he calls my legacy. I think he and his boss believes that if I become unpopular then my condemnation of the shenanigans involving 1MDB would be ignored by people.
So we are seeing now a new and more aggressive campaign to demonise me and to show how much the PM is supported by the people. Clearly large sums of money are being spent on this campaign. My friend is now installed in the Prime Minister’s Office and is working hard to cover up the wrong-doings of 1MDB. The first pages of the mainstream media now carry explanations on how the borrowed funds were spent. They add up neatly to 42 billion Ringgit. Before criticisms were just ignored. A policy of elegant silence was followed. Now Najib has been advised to answer to explain. However, he lost an opportunity to explain when he did not turn up for for the “Nothing to Hide” forum.

But there really can be no explanation on the disappearance of the money supposedly brought back from Cayman Islands – six billion US Dollars. No explanation can be made on the denial by the Swiss bank that it received money from 1MDB. No explanation on Arul’s claim that he saw the cash and the PM explaining there was no cash. Now the cash has become units. What units? No explanation also on the inability to pay interest of 2 billion until Ananda donated or loaned 2 billion whatever. Nor is there any explanation as to why 1MDB needs investments of USD1 billion by IPIC to pay debts to Deutsche Bank when 42 billion investments have been made. Is there no returns on the investments? And many other questions remain unanswered.
My EX-FRIEND will have to do better at demonising me if he is to earn titles etc. -Chedet.cc

The NGO,  SUKAGUAM, orgnisers of the 'NOTHING2HIDE' forum said that Tun Dr Mahathir was not invited to speak.  If that was the case, how was it his name was pasted on a designated seat for him? 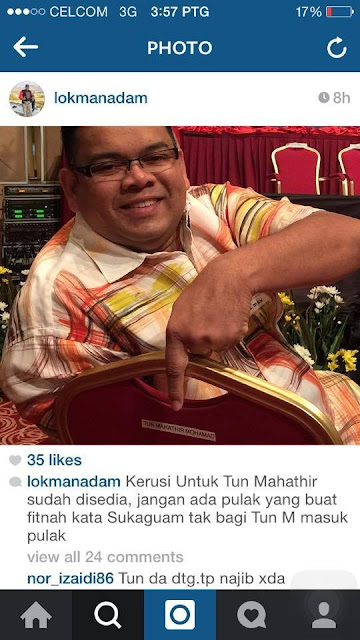 Posted by Geronimo at 9:23 AM No comments:

Now, even the royalties are angry with Najib

The so-called warrior did not show up this morning at the PWTC for the scheduled 'Nothing To Hide' forum, presumably out of fear for Dr Mahathir who had plans to grill him thoroughly over the 1MDB scandal.  As usual, he always have a ready scapegoat to take the fall and this time none other than the IGP himself.

Quite frankly, Najib's behaviour has become very predictable.  Even as the forum was announced, many had already voiced their takes that Najib would not show up, and true to his character, he did not show up.  However, the person who was most unlikely to show up, showed up, Dr Mahathir himself.  Well, he managed to give a short intro before the police came in to stop him from speaking citing security reasons.

Even worse, Najib's behaviour did not go down well with one royalty too and that is the Tunku Mahkota of Johore, DYAM Tunku Ismail Ibni Sultan Ibrahim.

With his absence, it further entrenches the belief that Najib has a lot to hide and would not be able to answer all the questions especially those coming from Dr Mahathir himself. 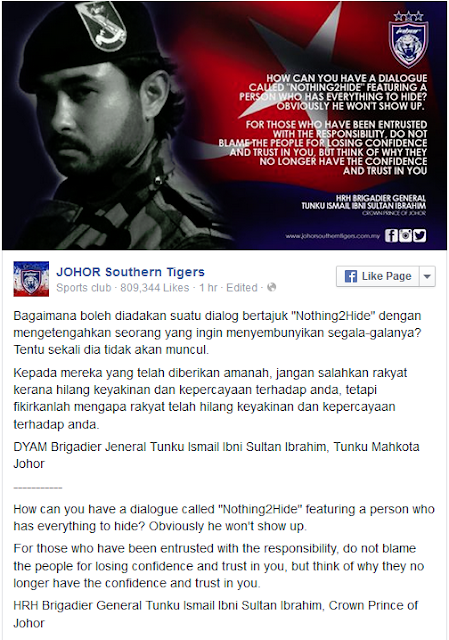 Posted by Geronimo at 7:10 PM No comments: 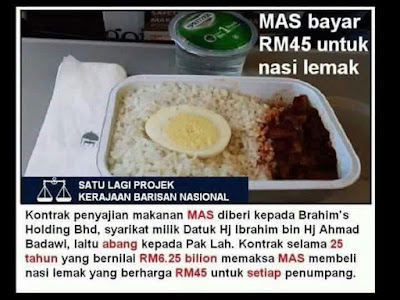 Now, we know why our national airline is failing.
Posted by Geronimo at 8:50 PM No comments:

There is no doubt that PAS have inherited the UMNO gene. When things go wrong, blame the Chinese, blame the Christians, but themselves. How can Pakatan ever work with a party with such lop-sided mindset, I wonder. He forgot for a moment that when Kelantan was hit by the recent flood, DAP contributed from its own coffers RM500,000 under the Impian Kelantan project to aid the flood victims. Such ingratitude.

The 'muktamar' should be the platform for them to reflect on where they went wrong with fellow Pakatan members and how to improve relationship with its partners, instead of indulging in blame game.  To think Chinese Christians trusted them with their votes.

Posted by Geronimo at 7:28 AM No comments: