As far as Season 11 goes, we are now almost at the tail end of the show to determine who the next American Idol will be.  However, despite the fact that I have been following the programme for some years now, I, regrettably missed out one important episode in Season 9.  So, what's so special about this episode?  Well, it was saying farewell to Simon Cowell, as this was his last season with AI.  I guess many of us still miss him on the show, first for his typical English temperament and secondly, for his ever caustic remarks.

I understand that the episode has its touching moments enough to warrant a re-visit, and here they are.  Enjoy.

Posted by Geronimo at 8:27 AM No comments:

How can Najib not invite me?

This is most unfair.  Najib used my money for his daughter's engagement and his birthday celebration, and I was not even invited.  How can??? 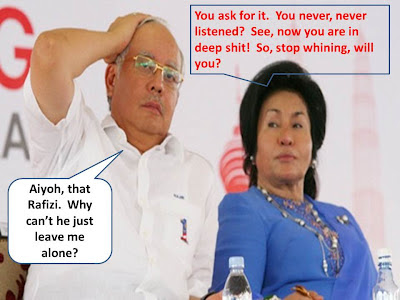 Posted by Geronimo at 4:13 PM No comments:

This is not good, not good at all, not only for Sharizat, but for UMNO as well

Singapore’s Rochester Mall has turfed out its planned anchor tenant Farmhouse Supermarkets as the store, linked to the family of Datuk Seri Shahrizat Abdul Jalil in the ongoing National Feedlot Centre (NFC) scandal, was unable to get its operations ready in time.

The opposition had accused Shahrizat’s(picture) family, who are alleged to have abused a RM250 million federal loan given to their National Feedlot Corporation (NFCorp), of using the funds to finance personal business ventures as well as to purchase land and property unrelated to cattle farming.
“We have terminated the lease of Farmhouse Supermarkets and are in the process of getting new tenant(s) for the vacated retail space,” Singapore’s The Straits Times quoted a spokesman for Singapore-listed United Engineers, the project’s owner, as saying.
The supermarket was to occupy the entire second floor, spanning more than 25,000 sq ft, of the mall at the one-north precinct in Buona Vista.
PKR had claimed that rental alone for the venture would have cost RM2.2 million a month.
But NFCorp chairman Datuk Seri Mohamad Salleh Ismail explained that the publicly-funded cattle-rearing firm was building up the market in Singapore and would likely do the same in Indonesia in future but did not comment directly on Farmhouse Supermarkets.
Salleh, who is Wanita Umno chief Shahrizat’s husband, pleaded not guilty on Monday to criminal breach of trust and violating the Companies Act in relation to RM49 million in federal funds given to manage the NFC project in a scandal that has opened the Barisan Nasional (BN) government to damaging attacks ahead of elections expected soon.
This was after Shahrizat said on Sunday she would quit as women, family and community development minister when her senatorship ends on April 8.
Her resignation came after 4½ months of being dogged by allegations that she and her family used public funds to finance over RM62 million of land, property and expenses unrelated to cattle farming.
The DAP has also accused NFCorp directors of cashing out RM12 million from the federal loan by channelling it through one of their companies in Singapore.
NFCorp, tasked with running the national cattle farming scheme, is headed by Shahrizat’s husband and their three children. The NFC project in Gemas, Negri Sembilan, was awarded to the company in 2006 when Shahrizat was in Cabinet.
She had previously resisted calls from the opposition as well as Umno veterans such as Tun Dr Mahathir Mohamad to quit, stressing that she was “only the wife” of Salleh and had nothing to do with the embattled entity.
NFCorp hit the national headlines after it made it into the Auditor-General’s Report last year for missing production targets.
[Source: The MI]
.
Posted by Geronimo at 2:59 PM No comments:

This is what PKR vice president N Surendran has to ask with regard to Sharizat's "resignation".

“Since Shahrizat's term as a senator ends on April 8, her ministership must also end in accordance with Article 43. Therefore how can Shahrizat claim to be resigning on April 8?”


Aha, gotcha Sharizat, and you too, Najib.  How can Najib say that Sharizat is making a sacrifice by "resigning" when she directly or indirectly has abused the trust of the loan of RM250m given to her to start and manage the NFC project?  When a leader is full of praise of someone who has demonstrated ample negligence in managing the affairs of the state, that leader too must have skeletons in his closet, and the victim is holding him by the proverbial "balls".


By right, a good leader would have sent her to Siberia until a proper investigation has been completed and not a mere 3-month leave due to the magnitude of the case.  If Teoh Beng Hock could "fly" out from the sixth floor for a mere RM2,100+, in the case of Sharizat, for RM250m, even the Petronas Twin Tower would seem too low for her.  So Najib must have advised her, "Why don't you wait out until your Senator term expires on April 8 and I will make an announcement that you are resigning and that you have made a noble sacrifice by doing so.  I think that would make you and I look good in the eyes of the rakyat."  Sharizat replied, "So we adopt that 'Gua tolong lu, lu tolong gua' tactic, eh?" 'Weeellll .... sort of," said Najib nodding his head.  He further added, 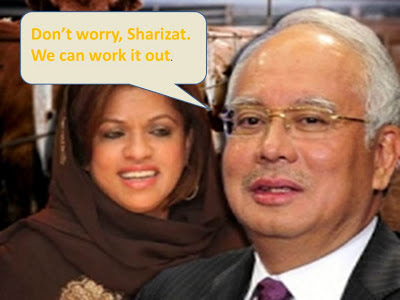 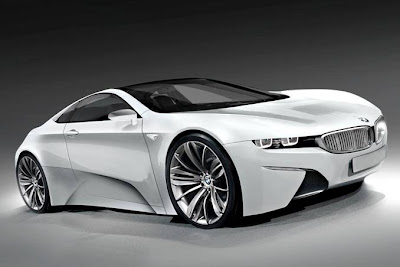 
I don't know whether this guy is trying to be funny or merely stupid, but what if the fish had been a piranha?  Yiiikes!!!!!

The difference between CRAZY and STUPID
One truck driver was doing his usual delivery to Mental Hospital.
He discovered a flat tyre when he was about to go home.
He jacked up the truck and took the flat tyre down.
When he was about to fix the spare tyre, he accidentally dropped all the bolts into the drain.
As he can't fish the bolts out, he started to panic.
One patient happened to walk past and asked the driver what happened
The driver thought to himself, since there's nothing much he can do; he told the patient the whole incident.

The patient laughed at him & said "can't even fix such a simple   problem...no wonder you   are destined to be a truck driver..."
Here's what you can do, take one bolt each from the other 3 tyres and fix it onto this tyre.
Then drive to the nearest workshop and replace the missing ones, easy as that"

Sharizat is resigning or is she?

Came across this news report that Sharizat is resigning, both as a minister and as head of Wanita UMNO.  There have been a lot of feet dragging and a lot ot talk on this matter from her, Najib and some UMNO leaders.  So, are you going or not going?

Posted by Geronimo at 3:56 PM No comments: