Has "Sleep Apnea" struck again, this time it's Najib

How could he do this in front of hundreds of delegates and right there on the stage too? 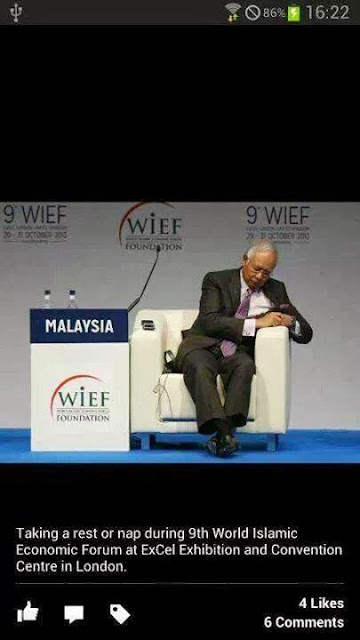 And while he is snoozing away in a world of his own, the British people are giving him the heat from outside the convention hall.

"British Victims of Investing in Malaysia" protest against Doxport Technologies Sdn Bhd outside Excel Centre in London at the World Islamic Economic Forum. 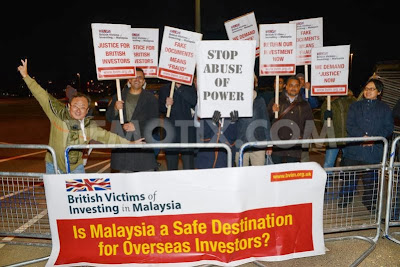 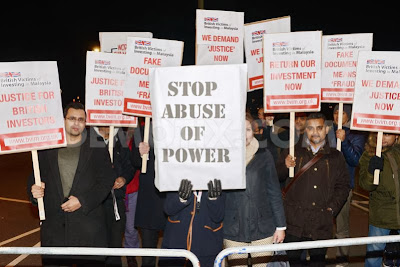 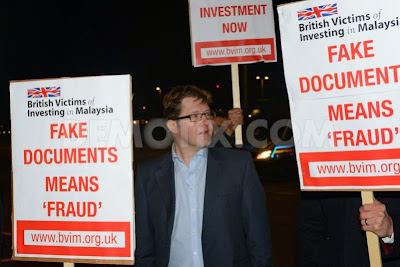 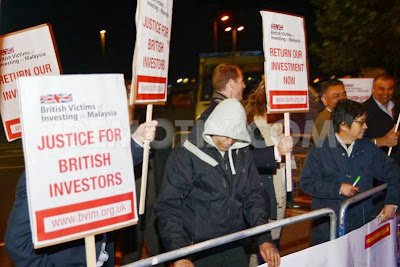 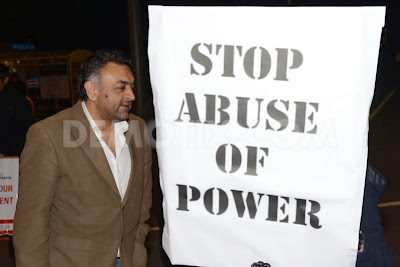 Read more here.
Posted by Geronimo at 7:11 AM No comments:

Is Malaysia a looney house?

To be a Malaysian is not easy these days.  Besides having to struggle to survive, many on their meagre income, our lives are further made more difficult by politicians who do not seem to know whether they are coming or going with their ill-thought policies.

We have a Federal Constitution which is meant to protect the well being of ALL its citizens, irrespective of race, religion or creed.  But apparently this doesn't seem to be the case.  Instead we have laws enacted that are so skewed across racial and religious boundaries, that it is almost like walking in a minefield, gingerly taking one step at a time, lest you stepped on a landmine to have it exploded in your face.  The Federal Constitution somehow seems to have been relegated to the background.

This brings us to the 'Allah' issue which further proves my point on the state of confusion we are in.

1. The Court of Appeal said one thing supported by UMNO Baru.
2. Christian ministers said another.
3. Muslims around the world said one thing.
4. Pro-UMNO Baru NGOs said that the Arabs were ignorant of the religion, and the Indonesians are not good Muslims because they ate pork, and yet they like to copy the way the Arabs dress and even send students to the Middles East to further their religious studies.  Contradictory, isn't it?
5. To add to the already confused issue, one ISMA leader who earlier supported the CoA decision, now said it was okay for East Malaysians to use the word.  Even they themselves were not sure how the policy works.
6. Christian leaders in the BN said the government will honour the 10-point agreement but to date, not one UMNO Baru leader has stepped forward to unreservedly make that stand.
7. The head of the ISMA NGO, told East Malaysians that if they didn't like the CoA decision, they could migrate.  Where to, when the latter themselves are the natives of Sabah and Sarawak. Duh!
8. But, before we could even heave a sigh of relief that East Malaysia has been exempted from the 'Allah' ban, 2,000 copies of The Herald were confiscated at the KK airport, leaving many Catholics in the state without their Sunday paper.
9. The Home Minister then came out with a statement that the word was only prohibited in The Herald, but not the BM version of the Bible. Huh?
10. Thus, we ended up having two set of 'Allah' laws, one for East Malaysia and the other, for Malaya.
11. A group of lawyers now said there cannot be two set of laws for Christians. If the CoA decision was to be implemented, legally that is, the banning of the word was to be applied to both East and West Malaysia alike. Read the press report HERE.

The Christians in this country can only say, "Duh!?" every time a politician comes out with another statement that contradicts the early statement made by another party.

At the rate things are going, I thought it would be best to go for a check up before I start seeing a 'cuckoo' bird flying in front of me, and I am glad to report that I have been certified to be still mentally sane which means I will still be happily blogging away for a long time to come.

And while confusion reigns, WHERE THE HECK IS THE PRIME MINISTER????