Are we on the threshold of World War III ?? 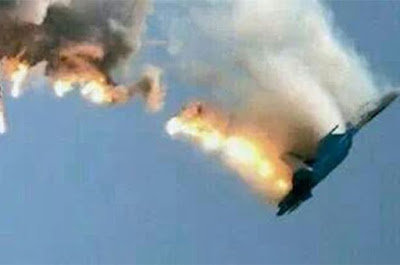 So Turkey shot down a Russian jet. Putin is angry and he likens this to 'a stab in the back from a friend.' Russia will now retaliate by bombing Turkey. Being a member of NATO, the Americans will not sit idly by and will support Turkey by entering Syrian airspace to shoot down Russian jets.

China, an ally of Russia, too join in the fray by attacking the American fleet in the South China Sea as a show of old communist fraternity. The Chinese soon built a well fortified base on the Spratly Islands.

The Americans in the meantime will call upon their closest ally, the Philippines, to render aid. The ASEAN region, which has long been declared a zone of neutrality, is now in doubt, as each country is slowly sucked into the conflict. The Americans, inevitably, has opened up two fronts.


Meanwhile, China called on the North Koreans to contain the Japanese and the South Koreans while they focus on the South China Sea against the Americans.  This was  to ensure that Japan and South Korea who are allies with the US would not launch any attack on Chinese soil.  The North Koreans, who long despise the South Koreans and the Japanese, begin to move their large navy into the Tsugaru Straits. The invasion is broken up into two, with one group heading north to capture Sapporo in Hokkaido, while another group head south via Honshu to capture the city of Tokyo. Japan is unable to defend itself as they are being constrained by their 'peace time' constitution. Japan capitulate.

Meanwhile in the middle east, Russia receives a boost from Iran. The Americans continue to supply arms and military hardware to ISIS to help them fight the Iranians and the Russians. In order not to be left out, Hezbollah, sends in its men to support its Shiite brothers, the Iranians. This was in retaliation for an attack by ISIS on the Hezbollah stronghold in Beirut on November 12 2015. However, the Kurds/YPGs/Peshmergas who have been gaining substantial ground prior to the downing of the Russian jet, are now sandwiched between the Turks in the north, and ISIS in the south who found themselves rejuvenated with arms supplied by the Americans and the Saudis. Defeat for the Kurds is imminent.

Hamas in support of Hezbollah, start to re launch rocket attacks into Israel.  This was to ensure that Israel will not take this opportunity to attack Hezbollah since most of their men would have joined the Iranians in their fight against ISIS.  Israel activates its Iron Dome.

France, in the meantime, is caught in a quandary, but finally decides to join the Americans. The Russians feel that after Turkey, this is yet another 'stab in the back from a friend.' In the meantime, the European Union is in disarray as states go loggerheads on the handling on the refugee crisis and it is now every state for itself.  As a result of the bombing of Turkey by the Russians, this has created more refugees, this time from Turkey.  In view of the weakened state of the EU, ISIS cells all over Europe were activated simultaneously with attacks on civilians.  Thousands perished.

As the conflict escalates on the two fronts, the Russians finally throw in their Ace of Spade, the intercontinental ballistic missiles.

I woke up with perspiration trickling down the side of my face and quickly went to the balcony to breathe in a gust of fresh morning air, and I noticed that the sky was still blue and the birds were happily chirping away.
Posted by Geronimo at 7:19 AM No comments: