ARREST WARRANT FOR THE PRIME MINISTER! - The Real Reason The Attorney General Was Fired ?

30 Jul 2015
Dumped before he could make his move?
Sarawak Report has acquired documents, now verified, which explain exactly why Abdul Gani Patail was dramatically fired on Monday.

The Attorney General was on the brink of bringing charges for corruption against the Prime Minister of Malaysia.

We have acquired the secret documents, which Gani Patail was in the process of drafting.

They include a charge sheet for corrupt practices under Section 17 (a) of the MACC Act, allowing for punishment of a sentence of up to 20 years in prison under Section 24 of the Act.

In an unprecedented situation the person being charged was none other than the Prime Minister “Dato’ Seri Mohd Najib Bin Tun Abdul Razak” along with a company director, Dato’ Shamus Anuar Bin Sulaiman.

The explosive information hits Malaysia in the middle of a highly controversial visit by the British Prime Minister, who had been widely warned against making such a visit in the midst of Malaysia’ biggest political scandal in decades.

The documents, which were being worked in their final draft stages by the Attorney General, were sent to Sarawak Report following the sacking of Gani Patail and have now been verified by other senior parties.

Arrest Warrant for a Prime Minister!

In English the first of two draft warrants spell out the charges being brought by Malaysia’s most senior law officer (who was unconstitutionally dismissed by the Prime Minister the day after these drafts were printed).

The warrant cites that the Prime Minister and Shamsul Anuar and “another person still at large Nik Ariff Bin Faisla Kamil” did on 26th of December 2014 at the AmIslamic Bank, Bangunan Ambank Group in Kuala Lumpur, as an agent of the Malaysian Government, namely the Prime Minister of Malaysia and special advisor of SRC International, secretly obtain a sum of money amounting to RM27 million that was paid through the company Gandingan Mentari and Ihsan Perdana to your account at AmPrivate Banking -1MY no 211201101880 with the principal aim of obtaining a loan from Kumpulan Wang Persaraan pension fund.

“As such you have committed an offence under Section 17(1) of the Malaysian Anti-Corruption Act of 2009, under which you can be punished according to Section 24 of the Act, to be read with Section 34″.

The punishment cited at the base of the document is imprisonment of not more than 20 years and a fine not less than five times of the value of the bribe taken or RM10,000, whichever is higher.
Raiding Malaysia’s public pension fund KWAP!

The crime referred to has already been widely reported following exposes by Sarawak Report and the Wall Street Journal at the start of this month.

We produced documents from the task force investigation into 1MDB, which showed that its former subsidiary SRC International (whose CEO is Nik Kamil) had made a number of payments into the Prime Minister’s personal accounts totaling millions of ringgit over a period from last December to this February.

A second, alternative draft charge was being worked on by the Attorney General, which Sarawak Report has also obtained.

The second charge relates to the same act on the same day, but refers more specifically to the Prime Minister’s position of trust with regard to the company SRC. In English it reads:

“Secret ...
The first draft of the charge (alternative)

That you on 26.12.2014 in AmIslamic Bank Berhad, AmBank Group Building, No. 55 Jalan Raja Chulan, Kuala Lumpur Federal Territory as an agent, as Prime Minister and Finance Minister of Malaysia and Special Adviser (Emeritus Advisor) Company SRC International Sdn Bhd which in that capacity, is entrusted with the control of the fund company, has criminal breach of trust funds, namely dishonestly disposing of SRC International Sdn Bhd Company amounted RM27juta to your account AmPrivate Banking-1MY no. 2112022011880 via coupling Mentari Sdn Bhd Corporate and Company Ihsan Perdana Sdn Bhd. Therefore you committed the offense and punishable taken of Section 409 of the Penal Code, read together with section 34 of the Penal Code

Penalties:
Sabit errors can be jailed for a minimum of 2 years and a maximum of 20 years and with whipping, and a fine.

A close insider has now confirmed to Sarawak Report that Patail had arrived at his office on Monday morning expecting to finalise the extremely sensitive charges he was preparing against the Prime Minister, resulting from the investigations of the multi-agency task force into 1MDB.

“He was finalising it. He went to his office and found he could not go in. Ali Bin Hamsa, the Chief Secretary to the Government, was waiting and he told him [the Attorney General, Abdul Gani Patail] that he was dismissed. He could not even get his papers.”

Within hours of this secret drama at the heart of government, as all Malaysia knows, the Prime Minister had moved to effect what has been described as an attempted coup d’etat.

The head of Special Branch was removed, the Deputy Prime Minister was dumped and four members of the investigating Parliamentary Accounts Committee were elevated without choice to positions in Cabinet and its work was declared suspended.

Other known cabinet critics of the the 1MDB scandal have also been unceremoniously dismissed by the Prime Minister.

It has been also been announced that tomorrow’s meeting of the UMNO Supreme Council, representing the key leadership of the ruling party, has also been cancelled by the Prime Minister.

Now all Malaysia knows why the Prime Minister has moved to sack the countries top legal officers and top politicians.

In an irony of perfect timing the Prime Minister is now seeking to use the visit of Britain’s David Cameron as an endorsement of his unconstitutional move to hijack the State of Malaysia.... 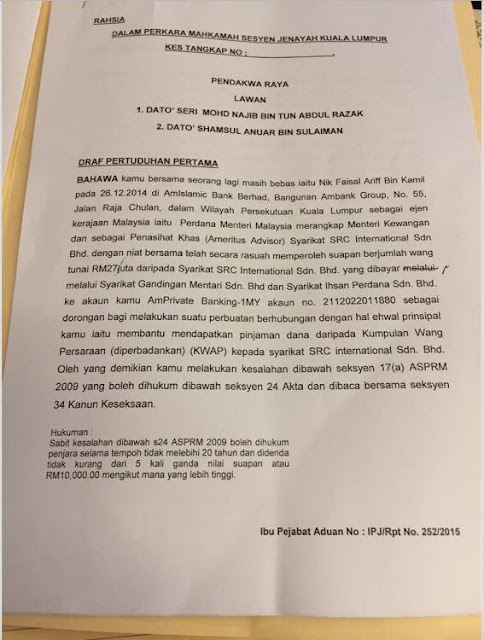 Posted by Geronimo at 3:26 PM No comments:

Dear Mr prime minister,
Welcome back to Malaysia. It is an honour that you have decided to return to my country so soon after your last trip in April 2012.
Let me first take this opportunity to congratulate you on the recent successful re-election of your government.
For all its oft-cited shortcomings, the British democratic system remains among the most free and fair in the world, with the Westminster an institution most countries like ours look up to.

Look at the contrast of our youths ...

Could this be a coincident? On July 11, the night of mayhem at Plaza Low Yat by 200 hooligans, a Sarawakian lass by name of Faye Jong had a meteorite named after her by NASA. On July 20, while 40 youths went on a rampage in Wangsa Maju we have this lass, Tan Hui Linn, receivng her award from the Sunway TES Centre for Accountancy Excellence. Tan Hui Linn was a victim of an acid attack by her father which left her visually impaired in the left eye and a face that required corrective surgery. She has since started work as an auditor in Penang. 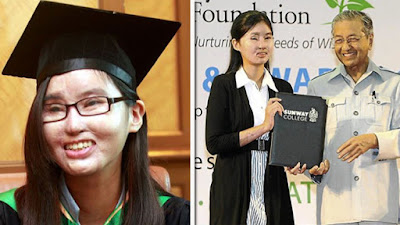 Posted by Geronimo at 7:12 AM No comments: