Woe is our education standard ..

A University professor wrote an expressive message to his students at the doctorate, masters and bachelors levels and placed it at the entrance in a university in South Africa.

And this is the message;

*"Collapsing any nation does not require use of atomic bombs or the use of long range missiles. It only requires lowering the quality of education and allowing cheating in the examinations by the students".*

The patient dies in the hands of such doctors

And the buildings collapse in the hands of such engineers

And the money is lost in the hands of such accountants

And humanity dies in the hands of such religious scholars

And justice is lost in the hands of such judges... 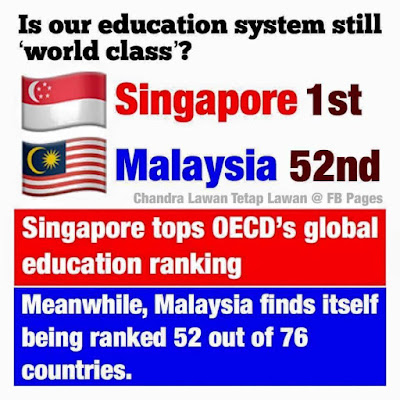 Posted by Geronimo at 5:43 PM No comments:

Li Shufu, the man who dared to buy Proton

Chinese entrepreneur and founder of Geely Automobile, Li Shufu, is the man who dared to buy loss-making national car maker Proton.
After years of dwindling sales and financial losses, it is hoped that finally now, Shufu is the man who would work his 'magic' in reviving Proton as he did with prestigious Swedish auto maker Volvo.
Given his proven track record in turning round loss-making auto companies, the Malaysian government and Proton's parent company DRB-Hicom are confident he will herald a new era of growth for Proton.
Yesterday, DRB-Hicom signed an agreement with China-based Zhejiang Geely Holdings Group Ltd  for the Chinese car group to acquire 49.9 percent in the national car maker.
Under the deal, Proton would also dispose its entire stake in British sports car-maker Lotus for 100 million pounds (RM1=RM5.57), a move that will enable Proton to cut its losses.
As Geely's owner, Shufu owns 100 percent of Volvo, yet many might not be aware that the owner hails from China.
Shufu is rare among today's many Chinese entrepreneurs for taking on auto manufacturing as it is a sector dominated by state enterprises and multinationals.
He founded Geely in 1986 to build refrigerators and became an automaker in 1997 when he wanted to produce a cheap car for the masses.
Geely Group now has reached 1.3 million car sales in the financial year 2016.
And, Shufu is now reportedly worth a staggering US$7 billion.
As an entrepreneur-owner, his almost 50 per cent ownership is a major plus point which Proton would derive from the partnership.
This is because Geely is a "entrepreneur driven" auto company and one of the few left in the world as opposed to car firms owned by state enterprises and multinationals.
As an entrepreneur-owner, there would undoubtedly be a greater sense of personal commitment to ensure that Proton achieves success at the domestic, regional and possibly global levels.
No wonder he is sometimes referred to as the 'Henry Ford of China'.
Before he bought Volvo in 2010, the Swedish car maker owned by Ford then, was on the brink of extinction.
He also owns the iconic London taxi Company.
With Geely's expertise, one can expect new Proton models, transfer of technology, more jobs, auto engineers and bigger orders for parts vendors.
The partnership can also help ramp up production capacity of its under-utilised Tanjung Malim plant to its full annual capacity.
The Chinese firm's acquisition of Proton nicely fits into its plans to make its presence felt in South-East Asia for which it has been on the lookout for a manufacturing plant in the region.


Investor sentiment on Geely has been immensely favourable with its share price on the Hong Kong Stock Exchange having risen from HK$3.77 in 2014 to HK$11.50 as of May 22, 2017.
Only time will tell whether Proton would emerge as a formidable automative player again.
Nevertheless, with Shufu and Geely providing solid backing, our very own and much-loved Proton brand now has a real chance of making a comeback, and probably a huge comeback at that.
- Bernama
Posted by Geronimo at 6:14 PM 2 comments: