BN will lose because of Ridhuan Tee 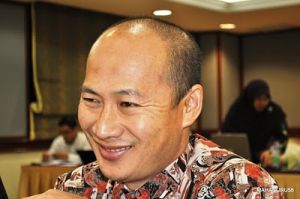 He is a Chinese through and through. A thoroughbred, you might say. He was born a Buddhist and later he found his calling in Islam and thence converted himself to Muslim. With his conversion, he suddenly felt empowered to say anything he wants under the sun, that is anything against the non-Muslims in this country. He started off by insulting the Chinese, then the Christians and now the Hindus. His name : Ridhuan Tee Abdullah.

The latest remarks has irked MIC S Vell Paari, and this is what he has to say.

Livid over the insensitive remarks of a Muslim academic, a vocal MIC leader has warned Home Minister Hishammuddin Hussein to act or face the repercussions.

S Vell Paari said that he would put forth a proposal to MIC’s all-powerful Central Working Committee (CWC) on this issue.

If the proposal is rejected, the MIC strategy director stressed that he is prepared to quit MIC and even call on the Indians to vote for Pakatan Rakyat in the next polls.

“If the CWC disagrees, then I would resign and take it to the members directly. Don’t underestimate my influence in the party,” he added, declining to elaborate on the proposal for now.

Vell Paari was responding to an article penned by Ridhuan Tee Abdullah, who is an associate professor with the National Defence University.

In the article titled “The patience of Muslims has limits” published in Sinar Harian yesterday, the academic criticised MIC for seeking to lift the temporary ban on the Tamil movie Vishwaroopam.
He also made derogatory remarks regarding the Thaipusam festival and complained about the proliferation of Hindu temples and shrines since the 2008 election.

Launching a vitriolic salvo on Ridhuan, a Chinese Muslim convert, Vell Paari labelled the former as an imitation product.

“These are products of a ruling that states if one speaks Malay, embraces Islam and follows the Malay culture, one is considered a Malay. I think this condition must be re-looked,” he told FMT.
Numerous individuals, Vell Paari said, exploited this ruling to become “Petaling Street Bumiputeras” and used the New Economic Policy to enhance themselves while the majority of true Malays remained in the doldrums.

“With more than 30 years of NEP and billions spent to uplift the socio-economic status of the Malays, how many true Malays are in the top 10 richest list in Malaysia.

“Taking into account the number of imitation Malays and the number of legalised illegal Muslim immigrants from Pakistan, India, Indonesia and the Philippines, I wouldn’t be surprised if the true Malays are now a minority like the Chinese and Indians,” he said.

Vell Paari also recalled how Ridhuan had wept during a television programme several years ago, saying that his mother and siblings were bound for hell for not embracing Islam.

“In my book, any person, no matter what religion he practices, who says that his or her mother would go to hell, would for sure rot and burn in hell instead. I won’t be surprised if he is making these comments with the hope of being an election candidate,” he said.

Training his guns on Hishammuddin, Vell Paari asked the minister what actions he would initiate against Ridhuan.

“You banned a movie deemed fit for viewing by the Censorship Board of Malaysia as it was said to be insensitive to the feelings of Muslim. But not only have Ridhuan’s remarks hurt the feelings of Indians but he has also insulted the Hindus,” he said.

Stressing that a slap on the wrist would not suffice, the MIC leader urged the home minister to take stern action against the academic.

With all the new technology regarding fertility recently, a 65-year-old friend of mine was able to give birth.

When she was discharged from the hospital and went home, I went to visit. 'May I see the new baby?' I asked 'Not yet,' She said 'I'll make coffee and we can chat for a while first.'

Thirty minutes had passed, and I asked, 'May I see the new baby now?' 'No, not yet,' She said.

After another few minutes had elapsed, I asked again, 'May I see the baby now?'
'No, not yet,' replied my friend. Growing very impatient, I asked,
'Well, when can I see the baby?'WHEN HE CRIES!' she told me.
'WHEN HE CRIES?' I demanded. 'Why do I have to wait until he CRIES?'
'BECAUSE I FORGOT WHERE I PUT HIM, O.K.?!!!!'

AS  IF THINGS ARE NOT ALREADY GETTING MORE AND MORE BIZARRE EACH DAY, HERE IS ONE MORE TO ADD TO THE LIST.  FROM OUR OWN TRAFFIC COPS, CAUGHT A CAR SPEEDING AT 789 KM/J?  WOW, THE CAR COULD PROBABLY TAKE OFF LIKE A PLANE. 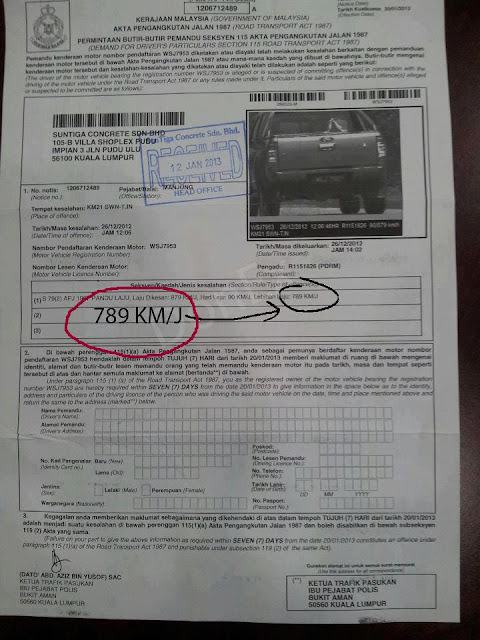 Posted by Geronimo at 6:30 AM No comments: