The veteran politician also thanks Pandikar Amin Mulia for his services rendered to the Dewan Rakyat.

PETALING JAYA: DAP chairman and veteran politician Karpal Singh today said he was deeply touched by Dewan Rakyat Speaker Pandikar Amin Mulia’s apology to him yesterday, and reciprocated with his own apology.

“I wish to reciprocate by asking for his forgiveness for the many transgressions for which an apology is due from me to him.

“I wish Tan Sri Pandikar well and thank him on behalf of the DAP for his services rendered to the Dewan Rakyat,” Karpal said in a statement today.

Yesterday, at the end of the last parliamentary session before the 13th general election, Pandikar took the opportunity to apologise to MPs if he had hurt their feelings in the course of the parliamentary sittings since 2008.

He specifically tendered his apology to Bukit Gelugor MP Karpal Singh for being insensitive over the veteran MP’s health conditions.

He explained that there was one time during the sitting when he had asked for all the MPs to raise their hands to make a decision on a Bill and had reprimanded Karpal for failing to do so.

He said it had slipped his mind that Karpal could not lift his hand as he was disabled following a bad car crash some years ago.

“I still feel bad about it till today. Although Karpal is not in the House today, I would like to say that I am very sorry. I did not mean to be so insensitive,” Pandikar said yesterday.

Email ThisBlogThis!Share to TwitterShare to FacebookShare to Pinterest
Labels: Food For Thought

Posted by Geronimo at 9:23 PM No comments:

The hair raising truth about the MCA 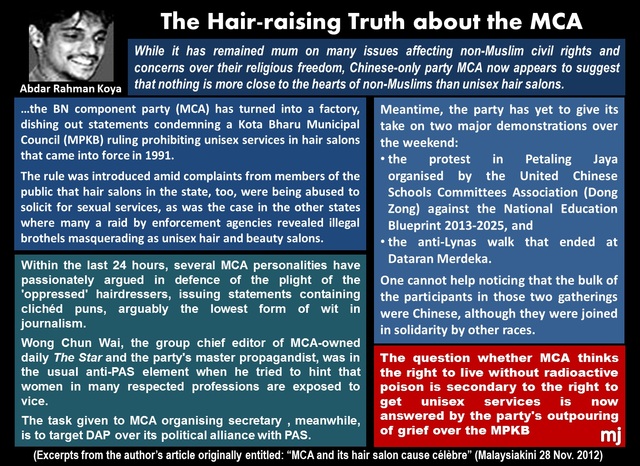 In an attempt to soothe the growing discontent among non-Muslims in the state, the Kelantan government will seek to hold a discussion with non-Muslim community representatives and business operators over the controversial ruling pertaining to unisex hair salons there.

According to state Information, Science Information Development and Technology Committee chairperson Dr Mohd Fadzli Hassan, the Kelantan government is prepared to hold the discussion to come up with the best and speediest solution to the matter, reported PAS' online portal Harakahdaily, which stated that the move was based on a suggestion by the PAS’ Supporters Congress.

Fadzli stressed that Kelantan government takes into account the need to care for the rights of non-Muslims in the state and assured that the meeting would be arranged at the soonest possible time.

He was further quoted as saying that prior to this, no official objections have ever reached the state government over the ruling requiring women-run hair salons to cater only to a women clientele.

The issue first came about after it was reported that a female hairdresser at a salon in a mall was summoned by the Kota Baru Municipal Council (MPKB) for cutting a male customer's hair, as unisex service is banned in the town's hair salons.
Meanwhile, according to Malay daily Utusan Malaysia, PAS Supporters Congress president Hu Pang Chaw said the state must cease enforcing rulings which affect non-Muslims in Kelantan pending further study, as this will ensure fairness to the latter’s rights.

This, Hu said, was stressed by party president Abdul Hadi Awang during the recent party muktamar, during which Abdul Hadi said the Islamic party needed the support of non-Muslims if it intended to rule.

By-laws affecting non-Muslims, such as by the MPKB, were “not in accordance with current times.

“A study is needed to seek a solution that will accord justice to all parties, let alone by-laws that had been formulated in the 1990s and which were no longer relevant,” Hu reportedly said.

Utusan also published a statement by DAP Socialist Youth chief Anthony Loke, who also urged the PAS-led state government to re-evaluate the enforcement of Islamic laws upon the non-Muslims, and said his party will be bringing the matter up in a Pakatan Rakyat meeting soon.

The Islamic morality by-laws implemented by the Kota Baru Municipal Council are not meant to be expanded and implemented on non-Muslims, PAS president Abdul Hadi Awang said today.

This is clear in the Kelantan Syariah Criminal Offences Enactment (II) 1993, which is not applicable to non-Muslims, Hadi said in a statement.

The party, he added, views seriously the concerns voiced by the non-Muslims.

"At the same time, Kelantan has to enforce its responsibilities after getting the mandate given by the people to ensure that the good behaviour of Muslims is safeguarded," the PAS president said.

"Hence, PAS believes that the purpose of this by-law is towards that objective."

Hadi, who is also Marang MP, was referring to the uproar over the action taken by the Kota Baru municipality against a hair salon this month after its

The row led to MCA central committee member Loh Seng Kok calling on the DAP to quit the Pakatan coalition as it had no strength to fend off repeated provocations and oppression from PAS that impeded the dignity of the Chinese and non-Muslim voters.

Hadi said the PAS central committee, too, was willing to consider proposals made by non-Muslims to find the best way to resolve the hair salon row, based on their right to practise their religion.

"Certainly, discussions and negotiations are the best way to resolve a problem. We welcome the openness adopted by the PAS-led Kelantan government in this (to hold the discussion)," he said.

This, Hu said, would ensure fairness to non-Muslims rights, which Hadi had also stressed during the party's muktamar earlier this month.

Meanwhile, Kelantan Menteri Besar and PAS spiritual adviser Nik Abdul Aziz Nik Mat was quoted by The Star Online as saying that it is possible to exclude non-Muslim hairstylists in Kota Baru from attending to customers of the opposite sex.

"It is possible because they (those who object) are non-Muslims. Islam allows them to practice their culture, for as long as it is not in violation of the (Islamic) religion.

"First and foremost... we must uphold Syariah-based laws, Insyallah (God-willing),” Nik Aziz was quoted as saying, without making an official stand on the issue.

Nik Aziz said he had brought Kelantan dewan ulama chief Mohamad Daud for a discussion with five national PAS Supporters Congress members led by adviser its, Jeff Lee Weng Chun, who met him at his JKR 10 official residence, and promised that he will bring it up at the exco meeting for a decision to be confirmed.

Najib, we are still waiting


Remember the above scene?  It was UMNO's 66th anniversary celebration held at the Bukit Jalil National Sports Complex on May 11 2012.  It was reported that 100,000 attended the event and my guess it was a kind of 'kiasu' gathering as well to beat BERSIH's 250,000.

Anyway, the issue here is about the calling of the 13th general election.  If you follow the time meter of the video, you will notice that at :48 secs, Najib 'Gas Bag' Razak confidently told the crowd that he was so sure of winning that he felt like calling on the King to dissolve Parliament.

Er ... Najib, it is already six months todate.  Why haven't you spoken to the King yet?  Have you suddenly lost your confidence?  The King can't be staying in the North Pole or some unreachable part of the Amazon jungle that hindered you from seeking an audience with him.  So, what's up, friend?

Posted by Geronimo at 8:13 AM No comments: