Obama should have checked his facts before commenting 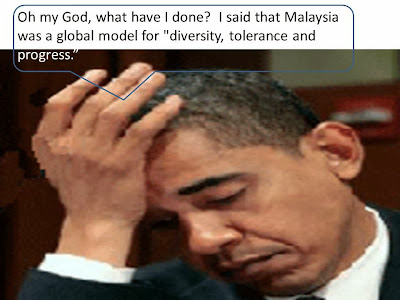 Suaram wrote a letter to the US president yesterday, rebutting a statement made by President Barack Obama on Oct 11 that Malaysia is a global model for "diversity, tolerance and progress".

President Obama's statement on Malaysia's "model" totally ignored the history of racism, religious extremism, corruption, electoral fraud and various other criminal activities the nation has endured while one government has ruled uninterrupted for 56 years.

Among other issues, spiralling violence, electoral fraud, corruption and serious human rights abuses that have taken place, and continue to be committed, under the leadership of Prime Minister Najib Abdul Razak.

Since the election outcome, PM Najib's office has overseen the demonisation of Malaysia's non-Malays, whose 'crime' was voting for the opposition. The Malaysian government has also selectively deployed repressive legislation such as the Sedition Act 1948, the Peaceful Assembly Act 2012 and the Penal Code to suppress protests against the election result by human rights defenders, opposition leaders and all the concern and peaceful Malaysians from various religions and ethnicity.

While President Obama's statement marked PM Najib's government with the word "progress", the Parliament - that the Malaysian leader dominates by gerrymandering - three weeks ago passed a Bill to amend the Prevention of Crime Act (PCA) to allow detention without trial.

Suaram reminds the US president that Human Rights Watch deputy Asia director Phil Robertson stated that "Malaysia is taking a huge step backwards on rights by returning to administrative detention practices much like the draconian Internal Security Act" (ISA).

There is no doubt Malaysia's PM has publicly backtracked on a commitment made in 2011 to do away with detention without trial and that such a policy reversal represents anything but "progress".

Further, Malaysia's home minister recently announced that police have the right to "shoot to kill" without question any person suspected of being a criminal. Political and community leaders who have defended the minister's strategy have accused one race in particular of committing crimes against another, deliberately fanning racial tension and encouraging racial violence.

On the religious front, we have a judiciary that remains infamously compliant to the BN government. On Oct 14, the politically driven judgment that day by Malaysia's Court of Appeal banned non-Muslims from using the word 'Allah' in Malay-language publications. This appeal against an earlier High Court verdict was lodged by the Malaysian government.

In light of the gravity of the issues raised in the letter, Suaram fully expects the office of the president of the United States of America to formally reply to our letter, which was written on behalf of millions of long-suffering Malaysians. 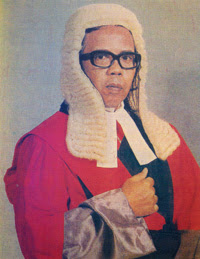 In the Braddell Memorial Lecture that was delivered at the National University of Singapore in 1982, former Lord President and one of our greatest judges, Mohamed Suffian Hashim, described his fellow judges as follows:

"In a multi-racial and multi-religious society like yours and mine, while we judges cannot help being Malay or Chinese or Indian; or being Muslim or Buddhist or Hindu or whatever, we strive not to be too identified with any particular race or religion - so that nobody reading our judgment with our names deleted could, with confidence, identify our race or religion, and so that the various communities, especially minority communities, are assured that we will not allow their rights to be trampled underfoot."

Our three CoA judges have failed us miserably.

Email ThisBlogThis!Share to TwitterShare to FacebookShare to Pinterest
Labels: Judiciary

Now, let's see what cock and bull story UMNO Baru is going to come with in not returning Jill Ireland Lawrence Bill's CDs.

Annou Xavier said “simple logic” dictated that CDs and other publications, which refer to God as “Allah” in non-Muslim creeds, should then be allowed for importation and distribution in Malaysia.

“If you say it’s the Herald, then all other publications and CDs and materials can be used,” Xavier told The Malay Mail Online today, referring to the Catholic Church’s weekly, the Herald.
“If it’s only confined to the Herald, then return the CDs. The CDs are not Herald. Simple logic,” added the lawyer.

On May 11, 2008, the Home Ministry confiscated eight Christian CDs from Jill Ireland at the Low Cost Carrier Terminal (LCCT) airport in Sepang, prompting the Melanau Christian to challenge its decisions in court.

Ministers Tan Sri Joseph Kurup and Datuk Seri Ahmad Zahid Hamidi said yesterday that last week’s Court of Appeal decision — which found that the home minister had acted well within his powers to prohibit the Herald from using the word “Allah” in its Bahasa Malaysia section — was limited to the church newspaper.

Last Monday, Prime Minister Datuk Seri Najib Razak also reassured Christians in Sabah and Sarawak that they could continue describing God as “Allah” in their religious practices, pointing to the 10-point solution, which his government issued in 2011, that allows Christians to publish, import and distribute Malay-language bibles containing the Arabic word.

The Court of Appeal ruling, however, has cast doubt over how the judiciary will rule on Jill Ireland’s case, and on another similar suit brought by Sabah Sidang Injil Borneo (Borneo Evangelical Church) against the Home Ministry for confiscating its Malay-language Christian education publications, which contain the word “Allah”, in 2007.

Xavier said recently that Jill Ireland’s case differed from that of the Herald, as his client’s case revolved around her right to worship and education, while the latter was about a publication permit.

In August 2008, Jill Ireland filed for a judicial review of the Home Ministry’s actions and a return of the CDs, besides a declaratory relief saying that she has a legitimate expectation to exercise the right to use “Allah”, and to continue to own and import such materials.

In August 2010, Jill Ireland’s lawyers had also filed an application to cross-examine the then Home Minister Tan Sri Syed Hamid Albar, but the application was dismissed by the High Court on July 12, 2011.

The Bumiputera Christian then appealed to the Court of Appeal in April 3, 2012, but the appellate court dismissed the appeal on getting Syed Hamid to appear for cross-examination on May 10 the same year.

According to Xavier, Jill Ireland’s case will come up in the High Court for mention soon.

Although the High Court granted Jill Ireland leave for judicial review in May 4, 2009, the hearing for the legal challenge has yet to start.

The Court of Appeal ruling on the Herald has earned censure from religious scholars and international publications, while lawyers have said that the court decision has created a precedent for a future ban on non-Muslims from using the word “Allah”.

[Source: MM Online]
Posted by Geronimo at 1:07 PM No comments:

An inspiring moment at the Ellen DeGeneres Show

Posted by Geronimo at 2:04 PM No comments: