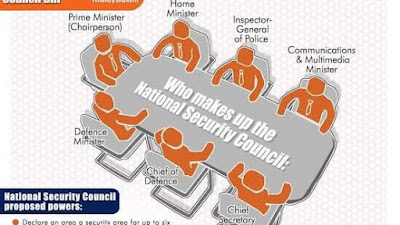 Sign the petition here ....
Posted by Geronimo at 9:17 PM No comments:

How oppressive or stringent is the recently-passed National Security Council Act? Is it enacted strictly to combat terrorists who pose a national security threat to the country? Unfortunately, Najib and his administration have certain ulterior motives. This draconian act will give him broader power to deal with any threats even against dissidents, whistle-blowers, critics and also arrest and imprison those patriotic Sabahans and Sarawakians who demand for secession from Malaysia!!!!All these boil down to one thing-Najib is turning into a dictator and he has every intention to rule the country with an iron fist-like it or not!!!!!

National Security Council Bill 2015
The Bill was passed in Parliament on Thursday, December 3, 2015. Primarily intended to combat
terrorism, a National Security Council (NSC) will be established and headed by the Prime Minister under the law. It encompasses broad powers to declare ‘security areas’ and arrest, detain and seize property without warrant.

Why are we concerned?
1. Wide powers under clauses — lack transparency, accountability and respect for individual rights Clause 6: NSC consists of PM, DPM, Minister of Defence, Minister of Home Affairs, Minister of Communication and Multimedia, Chief Secretary to the Government, Chief of Defence Forces, and the Inspector General of Police. All are appointed by PM and report directly to the PM.
Clause 18 (1): PM has full discretion to decide where is “security area”
Clause 18 (3) and (4): Initial declaration of “security area” lasts for six months but may be renewed by PM indefinitely
Clause 22-30: Security forces can arrest without warrant; stop and search; enter and search premise; take possession of any land, building or movable property.
Clause 37: All NSC’s affairs are done is absolute secrecy
Clause 38: No action or lawsuit can be brought against NSC
The term “national security” was not clearly defined. It can be “economic stability,” “national unity,” or “political stability.”

2. Hasty passage of the Bill
The Bill was presented to Parliament and passed within two days. Member of Parliaments, lawyers and human rights activists have raised concerns over the lack of consultation. Alor Star MP called it the “death to democracy in Malaysia.”

3. Constitutional validity — overstepping Yang Di-Pertuan Agong (YDPA)’s powers?
The Bill effectively provides the PM emergency powers without the need to declare a state of emergency under Article 150 of the Federal Constitution, which was a power previously exclusive to the YDPA. The extensive powers also mimic those under the Emergency Ordinances, a law that was repealed by the parliament in 2011.

Conclusion
The potential abuse of the law is unsettling. Never had we a law that provides wider and unfettered powers in the hands of a few executive elites. Since there are already enough laws to combat terrorism in Malaysia, a new law that further encroaches on individual liberty is grossly alarming.
The rash manner in which it was passed only fuels speculation on the real basis behind it. We strongly urge the government to withdraw the National Security Bill 2015.

On the other hand, non-Chinese pupil enrolment went up by 20.7 per cent. The sharp and steady increase is despite pressure by opponents of SJKCs asking for the closing of vernacular schools in Malaysia as they purportedly lead to racial segregation.

This shows that fellow citizens of non-Chinese descent, especially non-Chinese parents of children in Chinese schools, are not buying into this fallacy. It is also a testimony of their confidence in SJKC, which a person of high political office has finally acknowledged.

In endorsing Chinese schools, Sarawak Chief Minister Tan Sri Adenan Satem hit out at Putrajaya’s policy of not recognising the Unified Examinations Certificate (UEC), calling it stupid and senseless.
The UEC is a standardised examination taken by students in all 60 Chinese independent secondary schools in the country. A number of international universities, including the prestigious Oxford University in the United Kingdom, recognise the qualification.

However, Putrajaya does not recognise the UEC on the ground it does not follow the national education curriculum. Adenan’s argument is that failure to recognise the UEC will lead to a brain drain and exodus of talent to countries which recognised the qualification.

While this move by Sarawak has resulted in a tug of war between the state and federal government over the recognition of the UEC, SJKCs continue to face several problems.
Based on the national census in 2010, fertility rate of the Chinese declined the most among all races. It has declined from 2.6 per cent  in 2000 to 1.5 per cent in 2010.

The other problem faced by SJKCs is their locations in business district and they face traffic congestion. Plans are afoot to relocate SJKC St Teresa, SJKC Lai Ming and SJKC Imbi to overcome this problem and change the distribution of SJKCs in Kuala Lumpur.

Is Adenan Satem crossing a bridge too far?

I believe Adenan is pushing the envelope. First, the recognition of the UEC. Then came the recognition of English as a medium of instruction alongside BM and now, the move for full autonomy. He wants to recall all the powers taken away by the federal government, and that PutraJaya should adhere to the MA63.

CM ADENAN : "We will also insist on Full Autonomy for Sarawak. We want the Malaysia Agreement to be honored in all aspect. Let us be reminded that we are people who have enjoy peace and prosperity...janganlah kita biar ia tergugat...I can assure you we will take care of Sarawak the best way we can.  Let us dedicate ourselves to the service of Sarawak, our country and the people..."

Turkey is really going to get it kau kau from Russia. Putin is saying, "Now, that is for shooting down one of our planes."

MUST READ links as Russia heightens its presence in Syria and actions taken against Turkey.

This is how Russia could hurt Turkey's economy.  Read news article here.

I certainly would not like to be at the receiving end of the Russian bear.
Posted by Geronimo at 6:09 AM No comments: