Darn it! Here they go again!

Another Orang Asli church construction in Kelantan is being stopped by the authorities, this time by the Department of Orang Asli Affairs (JHEOA)

They had issued a stop-work order to the Temiar village of Pos Pasik, Kelantan, as no permission had been granted to build a church there(left).

In the earlier 2007 incident, the Gua Musang local authority had ordered a halt to an Orang Asli church construction, only to be met with court action by the community for unlawfully demolishing their church.

In the case of the Temiar village, the department's deputy director-general Nisra Nisran Asra Ramlan in a letter dated Aug 9, had said that an application to build a church at that location had been rejected and ordered an immediate stop to all construction work.

The letter was in reply to village head Setmen Belungei who on May 20 had written to the JHEOA informing them of their plans for a church there to replace their exisiting one made of bamboo (right).

Half of the villagers had converted to Christianity in recent years.

However, the Centre for Orang Asli Concerns coordinator Colin Nicholas said that the department's permission was never sought and that the earlier letter was only a notification.

"The Orang Asli are not happy with this answer as they did not seek permission from the JHEOA," he said.

They had merely exercised courtesy to inform them of their plans.

The Orang Asli of Pos Pasik consider it their right to build such a structure on their land, in accordance with the constitution, he added.

Colin (left) said that lawyer Lum Chee Seng representing the Temiar headman had written to the DG on Sept 13 informing him that the department's permission was not being sought.

"He also sought the reasons for the rejection of the church building," he said.

In 2007, the Gua Musang district land office had issued a 'stop work' order to the Orang Asli church construction in that area as it was state land and no prior permission had been sought.

However, this was rebutted by the National Evangelical Christian Fellowship of Malaysia which pointed out to the land office that the site belonged to the villagers.

In spite of this, another 'stop-work' order was issued on April 19, followed by a notice of demolition dated May 24. The bulldozers arrived on June 4.

And in July 2009 the Kota Bharu High Court ruled the demolition as illegal.

Justice Mohd Azlan Hashim ordered the local authority to pay damages and costs because it had acted unlawfully when carrying out the action without giving the required 30-day notice.

Posted by Geronimo at 7:11 AM No comments: 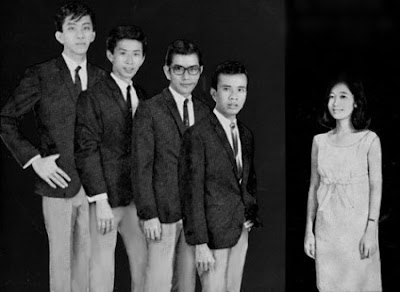 [L-R] James Ong (rhythm), Jimmy Ho (lead), Peter Ho (bass), Jalek Zula (drums) and Rose Iwanaga
The distinction of being the first English-language recording group from East Malaysia went to Rose Iwanaga & The Avengers from Kuching.
Despite the fact that Sarawak was already part of a greater Malaysia, little was known of this artiste nor any artiste from Sarawak or Sabah, as the focus of the music scene was very much centered in Kuala Lumpur and Penang (and of course, Singapore).
Then one day in 1965, I got hold of an EP which featured this Sarawak lass of Iban descent, Rose Iwanaga, backed by a group called The Avengers. I was certainly hooked on to that soft melodious voice of hers and have lost count the number of times I played the record, over and over again.
The hit that made her popular was the old Nat 'King' Cole classic, "Too Young", which was given a more contemporary approach. But the song that I enjoyed most was that Carole King's composition, "Will you still love me tomorrow".
Previous Features:
The Saints, Kuala Lumpur
The Quests, Singapore
The 'Little' Falcons
The Crescendos, Singapore
Posted by Geronimo at 6:04 AM No comments:

REMEMBERING SUDIRMAN - THE DAY THE MUSIC DIED
As we celebrate Malaysia Day as a symbol of “freedom and fraternity”, it is worth recalling that nearly two decades before the slogan 1Malaysia was coined, one national icon had already been crusading for a united nation free from prejudices.

The late Sudirman Arshad, showered then with accolades such as “Malaysia’s singing ambassador”, our “No 1 Entertainer” and even our very own Michael Jackson, championed unity up to his very last public concert just before his untimely death in 1992.

“This song is especially for all Malaysians regardless of race and religion, and one of its messages is we must live united as one family, on God’s earth, without differentiating race, colour, status or ancestry,” Sudirman told his audience on the night of March 9, 1991.
[Mkini]
The video speaks for itself. It depicts Sudirman's versatility singing songs in English, Malay, Tamil and Cantonese. We will also remember how UMNO protested against him wearing a Chinese mandarin costume during one of his last performances. Now, UMNO is talking about 1Malaysia. Maybe too little too late. Sudirman - certainly a great loss to the nation.
Posted by Geronimo at 5:31 PM No comments:

Do you think this would have happened if UMNO was still running Selangor state?

This morning, I held a press conference to announce that the Selangor State government has issued a letter of support to award four pieces of land for the purpose of building four chinese primary schools.

YB Dr Halimah (EXCO for Education) office and I both checked with the Land Office and received confirmation that four of the eight pieces of land which they applied for are indeed available for schools.

With this confirmation, 3 weeks ago, Menteri Besar’s office wrote a letter to the committee to inform them of the fact and that the state government welcomes any chinese primary school to be built upon it. The committee has already submitted their application for the four pieces of land.

Now, the decision of whether these four pieces of land are really turned into schools or not lies in the hands of Education Ministry and not in the state government.

I urge the Education Ministry and the federal government, especially MCA, to approve the application for these 4 pieces of land to be used for building chinese schools.

I recall how during the Hulu Selangor by-election, MCA president Chua Soi Lek openly accused Selangor state government of not giving land to chinese school. This was an irresponsible and unfair statement because education and the building of schools falls under Federal power, not the state’s, as Chua Soi Lek should well know.

Posted by Geronimo at 7:46 PM No comments:

Must view: An important message for you from Malaysia4Change

Posted by Geronimo at 9:34 PM No comments:

Wong had been keen to move from the climate change portfolio, following her failure to have parliament's upper house (Senate) approve the government carbon pollution reduction scheme.

Born on Nov 11, 1968 in Kota Kinabalu, Wong takes over the finance portfolio left vacant by the high-profile Lindsay Tanner when he retired from federal politics in the Aug 31 election.

A former lawyer in Adelaide, Wong was elected to represent South Australia in the Senate in 2001 and was named minister in charge of climate change, energy efficiency and water when Kevin Rudd won office in 2007.

Wong, a lesbian, was the first sitting member of the Australian Labor Party to "come out" while still in parliament.

Gillard says, her new ministry delivers on a promise to establish a portfolio dedicated to regional Australia.

It will be headed by Simon Crean, previously responsible for education and workplace relations, and before that, trade.

The announcement on Saturday comes four days after her Labor Party secured the support of two rural independents to form minority government in the first hung federal parliament in 70 years.

Greg Combet becomes climate change minister, a step up from his assistant role to Wong.

Mark Arbib, one of the factional power brokers responsible for bringing down Rudd, was not rewarded with a cabinet position.

- Bernama
Penny Wong is a direct immigrant to Australia and yet the Australians have no qualms in appointing her to such an important post, simply because it's the best man for the job. Here in Malaysia, after so many generations, non-Malay politicians are still appointed to nondescript ministries and strangely, these appointees are so contented with it. Well, I guess the finance ministry is where the petty cash is and I doubt UMNO is going to appoint a non-Malay, more so a Chinese, back to the job any time sooner. The finance ministry was last held by the late Tun Tan Siew Sin until UMNO decide to head it in the early seventies.
Posted by Geronimo at 7:32 AM No comments: