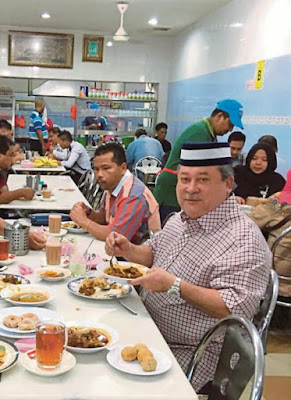 The Sultan of Johore, Sultan Ibrahim Sultan Iskandar, today entered a crowded eatery in Muar and gave all the patrons of Restoran Ansari a treat.

With a white sash on his songkok, the Sultan waived formalities aside and ate with the rakyat.

Without any frills or fuss and in the absence of any protocol, Sultan Ibrahim ordered his food and sat down to dine with his subjects, as seen on the ruler's Facebook page.

The Sultan not only treated the diners, but also paid the proprietor of the eatery to deliver free food to everyone for the rest of the day.

Azira said although she was not a Johorean, she was a big fan of the Johore royal family.

"I feel so proud that the state has a ruler like Sultan Ibrahim, and hope that when I am in Johore next month, I can bump into Tuanku", she wrote.

Another user, Fazidah Husin, hailed the Sultan as the best in the country.

"Tuanku's action and character alone makes me want to be a Johorean, as the ruler clearly has the rakyat in his heart.  I pray for the Sultan and the Permaisuri Johore to have good health, " Fazidah said.

Read More : http://www.nst.com.my/news/2015/12/117890/sultan-johor-waives-protocol-dine-rakyat
The Sultan of Johor Sultan Ibrahim Sultan Iskandar today entered a crowded eatery here and gave all the patrons of Restoran Ansari a treat. With a white sash on his songkok, the Sultan waived formalities aside and ate with the rakyat. Without any frills or fuss and in the absence of any protocol, Sultan Ibrahim ordered his food and sat down to dine with his subjects, as seen on the ruler's Facebook page. The post, uploaded at 8am, already had 3,204 shares and 31,091 likes at the time of writing. The Sultan not only treated the diners, but also paid the proprietor of the eatery to deliver free food to everyone for the rest of the day. Facebook user Azira Fadzil lauded the gracious gesture of the Sultan. Azira said although she was not a Johorean, she was a big fan of the Johor royal family. "I feel so proud that the state has a ruler like Sultan Ibrahim, and hope that when I am in Johor next month, I can bump into Tuanku," she wrote. Another user, Fazidah Husin hailed the Sultan as the best in the country. "Tuanku's action and character alone makes me want to be a Johorean, as the ruler clearly has the rakyat in his heart. I pray for the Sultan and the Permaisuri Johor to have good health," Fazidah said.

Email ThisBlogThis!Share to TwitterShare to FacebookShare to Pinterest
Labels: Royalties

Malaysia in dire straits and the worst to be affected will be the ordinary Malays. May God save us all.

This is what Syed Akbar Ali has to say:

How Much Longer Will The Malays Keep Quiet And Buat Tak Tahu?

Here is a comment from today about the situation in Malaysia :
Aeon Seremban is closing down 31 Dec 2015.

Aeon Penang is closing down too end Dec 2015.
Giant supermarket at Segamat is closing down too.
Baru balik dari Aeon Big Kota Damansara petang tadi lengang
Saya tanya cashier apasal sikit sgt org..dia senyum je.
Tempat parking kereta boleh main bola.
Memang sudah start slow down
In the next few weeks, close to 20,000 workers will lose their jobs in Malaysia.
Banks, finance houses, electronic companies, oil and gas companies, PMC and many more firms.
Just a few weeks ago, the Moron said if they did not collect that RM32b in GST taxes, the gomen will not have money to pay the salaries of Civil Servants.
Now they are saying that the salaries of Civil Servants will be increased next year.
Where are they going to get the money?
Today I heard it again that the Jalan Masjid India area is facing serious problems.
First of all that mamak retailer fellow linked to the Hippo is facing serious cash flow problems.
Over extended, borrowed too much money and now business being killed by GST.
Cashflow tight and that big shopping complex near Masjid India they took over is not generating enough cash.
Also the talk is the Hippo has cut him loose.
Does not want to be linked to a textile merchant ha ha ha.
Businesses are closing down in Masjid India.
"For Rent" signs are popping up.
Two bumi shoplots are now available for sale at the ground floor of Wisma Yakin alone.
(Melayu miskin dulu).
Tudung sellers cannot pay RM10,000 a month rental for their lots.
They are closing down.
They cannot even pay if there is a 50% discount ie RM5000 a month.
Business is very bad.
Full sized shops are renting for RM90,000 per month.
Less prominent spots are renting for RM40,000 per month.
Businesses operating here will be closing down or renegotiating their rentals.
All because of GST and Minimum Wages.
Many of those affected are Malay stall owners.
Melayu miskin dulu.
They are going out of business.
How much longer will the Malay people be able to bear this?
I think I have the answer.
Until their pockets literally become empty.
Like a car running out of gas and then just stopping dead on the road, so will the Malay people tolerate all this until they literally run out of money in their pockets.
Even then they may just say, 'takdir, cobaan, dugaan, kena sabar, banyaklah tawakkal, berdoalah, banyaklah beribadat' or something similar.

This is a very unique situation in the history of the human race.

Posted by Geronimo at 3:20 PM No comments:

Let's face it, there is no such thing as "moderate" in the vocab of UMNO anymore. To hold an anti-Christian seminar during this season of Christmas is most unthinkable. 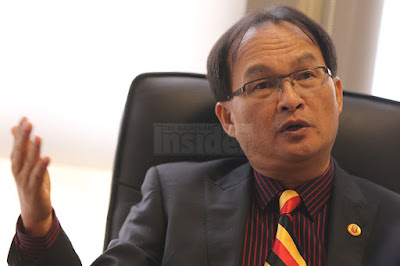 Najib and all his pretenses about being moderate is nothing but one HUGE lie to mislead the rakyat and the world. His odious administration thrives only in corruption and endorsing racial & religious intolerance!!!No wonder, The Washington Post called him the Champion of Double-talks.

Quote:
Sarawak PKR chairman Baru Bian has urged Prime Minister Datuk Seri Najib Razak to “stop his religious (moderation) pretence” and “throw the 1Malaysia lie into the bin”, for failing to end Christian-bashing in the country.

The old boy of Universiti Teknologi Mara (UiTM), outraged that his alma mater had the gall to hold another anti-Christian seminar after the outcry last year, said the moderate Islamic country that Najib tried to portray to the world was “long dead”.

“What started as Umno using Christianity as the bogeyman to divide and rule the people is leading to the radicalisation of Islam in this country, and the consequences will be catastrophic,” the Ba Kelalan assemblyman said.

He said the anti-Christian seminar the university held recently was also “odious and dangerous” and the university’s continued programme was due to the failure of the attorney-general (A-G) and police to act on it.

“Why did the A-G not pursue the matter last year?” Baru questioned the lack of action on last year’s seminar on the use of the word “Allah” and Christology.

The seminar featured speakers from Indonesia where the audience was told that undercover Christian priests had been sent to Malaysia under different guises, including working with Muslim children as football coaches, to proselytise and convert Muslims.

“It was reported then speakers at that May 2014 talk claimed Christians were betraying God unless they converted to Islam and called the New Testament gospels ‘fake’ as Jesus Christ was not divine.
“This is clearly blasphemous against Christians and the A-G had no reason to stop investigations.
“No wonder UiTM is not bothered about all the police reports made against it last year.”

Baru said the A-G’s failure, combined with the reported presence of a police officer at the latest seminar, it was no wonder the university continue to hold these seminars with impunity.

He said what appalled him even more was that instead of warning them against holding the seminar, the police sent a speaker to the event.

“What does the police force have to do with strengthening the ‘akidah’ of Muslims?

“They are supposed to keep law and order, not dabble in religious instruction.

Unquote
Posted by Geronimo at 8:10 AM No comments: