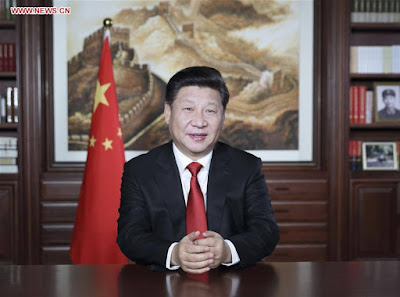 Comrades, friends, ladies and gentlemen,
In a few hours’ time, the bell of the New Year will be ringing. We’ll say goodbye to the year of 2015 and greet the first ray of sun light from 2016. At this occasion of bidding farewell to the old year and welcoming the new, I would like to express my best New Year wishes to Chinese people from all ethnic groups, to our compatriots from Hong Kong and Macao Special Administrative Regions, to our compatriots from Taiwan region and overseas, as well as to friends from all countries and regions around the world!

Fruitful gains come with persistent efforts. In the year of 2015, Chinese people have made great efforts in building their nation and have achieved enormously. Our economic growth remained at the forefront of the world, our reforms intensified comprehensively, the reforms on judicial system deepened, the “three stricts” and “three steadies” carried out in earnest, and the fight against corruption advanced solidly. Thanks to the great efforts of all Chinese people, the 12th 5-year plan from 2010 to 2015 successfully came to an end, which made the people in this country feel a heightened sense of gains.

In the year of 2015, we solemnly commemorated the 70th anniversary of the victory of Chinese people’s War of Resistance against Japanese Aggression and the World Anti-Fascist War, with a grand military-parade, showing the truth that justice will prevail, peace will prevail, and people will prevail. We comprehensively implemented the strategy of reforming and strengthening the army, and decided to cut military personnel by 300-thousand. The meeting between myself and Mr. Ma Ying-jeou in Singapore made the handshake between the top leaders of the mainland and Taiwan a reality after a lapse of 66 years. The handshake demonstrated that the peaceful development of cross-straits relationship is the common aspiration of the people on both sides of the Taiwan Straits.
In the year of 2015, Beijing won the bid for hosting the 24th Winter Olympic Games, Chinese currency Renminbi was approved by the IMF to be a global reserve currency in the Special Drawing Right basket, our self-developed C919 jetliner was put on production line, China’s super computer claimed top position for the 6th consecutive year, which is a world record, the satellite exploring dark matter, developed by our scientists, was launched into space successfully, Tu Youyou became our first Chinese scientist winning a Nobel Prize … All those facts have illustrated that dreams will eventually come true with determined perseverance.

In the year of 2015, we’ve not only experienced cheerful occasions but have also gone through sorrows. Many of our compatriots lost their lives in tragic incidents like the “Eastern Star” cruise ship wreck, the serious fire and blast in the port of Tianjin, and in the landslide in Shenzhen. Some of our compatriots were also brutally murdered by terrorists. Our hearts were broken by those tragedies. May the deceased rest in peace and the living remain safe and sound! There are still many difficulties and hardships in people’s daily lives. The Communist Party of China and the Chinese government will continue the efforts to ensure that the safety of people’s lives and properties are protected, and people’s rights to improved livelihood and physical health are guaranteed.

Comrades, friends, ladies and gentlemen;
2016 marks the beginning of the decisive phase in the national effort to build China into a comprehensive moderately prosperous society. The fifth plenum of the 18th Congress of the Communist Party of China has identified clearly the direction of development over the next five years. The prospects are encouraging. However, happiness will not just fall from heaven, we must empower ourselves with strong faith and confidence, continue to work hard, to seek innovative, coordinated and green development that is also open and shared by all. We will further advance structural reforms, continue the reform and opening up process, promote social fairness and justice, build a clean and healthy political environment, and lay a solid foundation for the decisive stage in building China into a moderately prosperous society.

To build China into a comprehensive moderately prosperous society, we need the effort of all the 1.3 billion people in this country. It remains a moral and emotional obligation for me to get the tens of millions of rural population out of poverty and to let them lead a decent life. Now the party and the nation have been mobilized to make concerted effort for the victory of the decisive battle over poverty. To all those still live in difficulty, we will let them know that we do care, and we will let them feel the warmth of heart, from ours to theirs.

Comrades, friends, ladies and gentlemen;
We have only one earth, this is the homeland of all peoples in the world. In the past year, Chinese leaders have participated in quite a few international conferences, and conducted numerous diplomatic activities for the well being of our common home. Our efforts to promote the “One belt, One road” initiative have achieved tangible results. We have participated in the discussion of the UN 2030 Agenda on Sustainable Development, as well as a series of world affairs concerning global climate change. The world is too big, and challenges are too many, to go without the voice from China being heard, without solution ideas from China being shared, without the involvement of China being needed. To those suffering from hardships and wars, we not only express our sympathy and solidarity, but will also take duty bound actions to provide help. China will, as always, open its arms to embrace the world, and offer its helping hands to those in need. Our circle of friends will grow bigger.

I sincerely hope that the international community will make concerted effort to make peace, relate to each other in cooperation rather than confrontation; beat swords into plowshares and to build a community of common destiny of all mankind.

Thank you.
Posted by Geronimo at 6:02 AM No comments:

The economic invasion of China

Will Malaysia soon be renamed as "Chima", a satellite state of China?

First, we have the Chinese tourists from the mainland coming in droves for the past twenty years spending their renminbi on us. Then, came the selling off of chunk of shares to China in the form of JV in the EDRA power plants, Bandar Malaysia, the commercial port in Malacca and the high speed rail from KL to Singapore projects, each one going into the billions of ringgit.

At the rate things are going, it will not be surprising if someone come out with a cockamamie suggestion to renamed our country as "Chima" (a combination of China and Malaysia), or Cantonese for sesame seeds.

Then, we will have roads with names such as :
Jalan Xi JinPing.
Jalan Mao TseTung
Jalan Deng XioPing.
Jalan Zhou EnLai
Jalan Hu JinTao
Jalan Li Peng
Jalan Jiang Zemin
PutraJaya will be renamed the Great Hall of the People.

Unlikely?  Maybe but one can never know the way things are going on in PutraJaya.  Food for thought, though
Posted by Geronimo at 5:59 AM No comments:

2016 is finally here and on that note, a very happy and blessed New Year to all my friends out there. 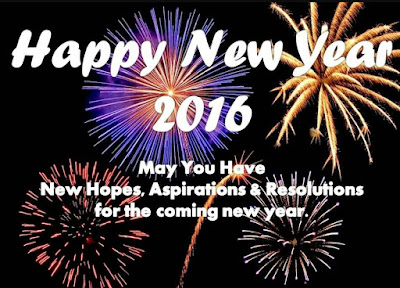 Posted by Geronimo at 7:13 AM No comments: