The table tennis teams at the 2016 Rio Olympics

Unbelievable, but it is true.  Whether the teams are from USA, Germany, Austria, Spain, Canada, Congo, Netherlands, Ukraine, Brazil, Australia, Poland, Turkey, Qatar, Sweden or Luxembourg, the players are all CHINESE. 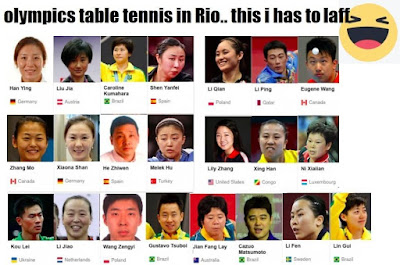 Posted by Geronimo at 8:18 AM No comments:

Email ThisBlogThis!Share to TwitterShare to FacebookShare to Pinterest
Labels: Sports

Are we seeing the light at the end of the tunnel in our judiciary system?

Khairuddin Hanuddin:
Appeals court: No one should be afraid of criticising government

The public should not be afraid to talk about government and public officers’ conduct, says the Court of Appeal.
In a 31-page written judgment by Court of Appeal Judge Justice Idrus Harun, in the case of Pahang Menteri Besar Adnan Yaacob suing Utusan Melayu for defamation, he noted the people should discuss their government and public officials’ conduct without being subjected to civil actions for their opinion.

“We consider that as one of the fundamental principles, that in the exercise of the right to such freedom within the ambit of the Federal Constitution and related laws, the people should have the right to discuss their government and the officials in carrying out their duties.

“Such right to talk has been enshrined under Article 10(1)(a) of the Constitution, without any common law principle being applied.”

Idrus also said that any actions taken against individuals who voiced out their criticisms was against the public interest and would affect the fundamental liberties of a person.

“As public interest dictates, a democratically elected government and officers should be subjected to criticism and every responsible citizen should not be restrained in their opinions on the government’s affairs and administration.”

The panel, which also consisted of Justice Rohana Yusof and Justice Mary Lim, suggested that the Derbyshire principle, which rules that those holding office in public bodies like local authorities cannot sue in their official capacity, should be applied and be adopted in the country’s defamation laws.

“The English court’s decision, in our opinion, is no less valid and should be applied and be part of our defamation laws.

“It has a similar principle related to our freedom of speech under the Constitution and that public interest does not favour the right of government and its officers to sue for libel,” Idrus said.

It is refreshing to see some judges are still upholding the law and liberty in this country. Sad that the same can’t be said about their fraternity brother in the AG chambers..
Posted by Geronimo at 11:53 PM No comments: