The passing of Gesang Martohartono

Jakarta: Gesang Martohartono, a folk music maestro and composer of the evergreen "Bengawan Solo" song, died today after failing health since May 12.

Gesang, 92, died at 6.10pm at the PKU Muhammadiyah Solo Hospital here, where he had been admitted since May 12.

According to doctors who treated him, though he had been a fit person despite his age, his heart progressively weakened before he breathed his last.

Born on Oct 1, 1917, he was one of Indonesia's most famous musicians and well-known throughout Asia, particularly Japan.

"Bengawan Solo", which he composed in 1940 at the age 23 and is about the river of the same name and the longest on Java island, became a monster hit and has been translated into many languages.

In 1983, as a tribute for his contributions to music, the Japanese government built a park in his name by the same river and is maintained to this day by the Gesang Fund, that it set up in his honour.

Gesang also received many accolades from all around for his musical works, including from Emperor Hirohito of Japan in 1992 and the Bintang Budaya Parama Dharma medal from Indonesia's president.

Below is the version sung by Anneke Gronloh ...

Posted by Geronimo at 1:49 PM No comments:

Email ThisBlogThis!Share to TwitterShare to FacebookShare to Pinterest
Labels: Milestone

Batang Ai, what has become of you? It was another bye-election!

Before and after the nomination day (8 May), the Sibu by-election has been turned into a ‘Sibu buy-election” when practically all federal ministers starting from Prime Minister Najib, Deputy Prime Minister Muhyiddin Yassin to ministers and to deputy ministers have come down to Sibu to show that they really care for the people of Sibu. State ministers including Chief Minister Abdul Taib Mahmud have been overshadowed by their visits and their activities.

These ministers, when they come to Sibu, bring with them some “goodies” such as fertilizers which are to be distributed to the poor farmers and promises of financial allocations for infrastructural development, schools, surau, masjid, repairs to longhouses, flood mitigations projects, and etc, etc.

The ministers’ favourite place is the central market where there are Iban, Chinese and Malay vegetable vendors, traders and small-time businessmen. They shake hands with the vegetable sellers. Some are trying to hold chickens wrapped in newspapersso that photographers will take pictures of them – just to show they are with the chicken sellers.

From all these programmes of activities, it seems that the ministers really treat people first performance now.

After the ‘buy-election’ they all disappear and the“buy-election” will become “bye-bye-election”. Promises forgotten and financial allocations never come. Suddenly the people become last, performance later – waiting perhaps for the next general election.

The Batang Ai ‘buy-election’ in April last year is a good example when people suddenly become last and performance never performed. During the campaign the people were first, performance now.

Now one year one month has gone and the promises left forgotten and unfulfilled. For example, the promise of tar-sealing roads in and around SALCRA plantations has not been fulfilled. The road to Ensawang village for example has not been tar-sealed until today. Roofing materials and the supply of clean water promised to this longhouse have never arrived. There are hundreds of longhouses have been cheated this way. Go to Batang Ai and ask the people there to prove my point.

What about the proposed road between Lemanak and Engkari which were supposed to cost more than RM70 million? And what about telecom towers? Even the promise of RM500 to each voter, if the BN candidate won, has not been received by them.

I understand the majority of the 110 longhouses in the Sibu parliamentary constituency is no different from other longhouses elsewhere – no piped water and supply of 24 electricity even though the main electrical wires pass over some of the longhouses.

For Sibu voters, especially the Iban voters, think first before you cast your votes.
Posted by Geronimo at 7:38 AM No comments:

Here we go again with that Ibrahim Ali fellow 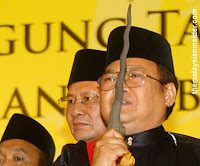 Malay rights group Perkasa has again questioned Chinese support for Barisan Nasional (BN), noting that the lack of support in Sibu was similar to the Hulu Selangor vote last month.

“The Chinese community openly supported DAP’s policies. The Chinese voters did not appreciate what the prime minister gave to them,” he said, adding Najib had supported the community’s vernacular school system.

The independent Pasir Mas MP has been at the forefront of Malay rights issues and has made Perkasa the country’s largest Malay non-governmental organisation.

“Chinese voters want the Chinese way although Bumiputeras have to accept the compromise made by BN to fulfil their needs,” Ibrahim added when commenting on BN’s defeat.

The Sibu federal seat is pre-dominantly Chinese and most of whom voted for DAP, which was contesting its first by-election since Election 2008.

The Chinese had also voted against the BN in Hulu Selangor three weeks ago although the ruling federal coalition still won the Parliamentary seat.

In view of the trend, Perkasa wanted BN to review financial aid and development projects for the Chinese community but BN and Umno leaders have dismissed such a move.

Ibrahim, however, said the Sibu result was a lesson that will motivate the Malays and bumiputras to unite as they were the dominant majority.

"For me, as a Malay and a Muslim, this is a lesson .... we will move forward, we will see", said the outspoken MP who had campaigned for the BN in Hulu Selangor.

You can see how the shallow mind works. In a country that practices democracy, there will be losers and winners in any election, and certainly one cannot expect a certain party to be winning all the time. So here we have a sore loser who has that twisted logic that if you vote for the Opposition, it means you are anti-Malay, period. Since the results was almost evenly keeled, did he take into account of the Chinese who voted for Robert Lau? As for the financial pledges made by the Najib, let's set the record straight. No one, no one ask for them. It was given voluntarily by Najib to 'buy' Chinese votes, which one can construe it as a form of a bribery. You know, like, you scratch my back, I'll scratch your back. The Chinese would have voted for the BN had they done something about their problems during the many years SUPP represented the constituency. But they did not. So why blame the Chinese when the BN themselves did not live up to the past election pledges? Instead of coming out with solutions to win back the Chinese votes, Ibrahim Ali wants to take it out on the Chinese by cutting off funds to them. I guess the Chinese would say, "By all means, keep your money. Our dignity is not for sale!"

Posted by Geronimo at 1:36 PM No comments:

Just like in Hulu Selangor and all previous by-elections, it happened in Sibu again. If these are not bribery, I don't know what is and this guy is making use of our money to do just that. Hello, MACC, anyone at home? 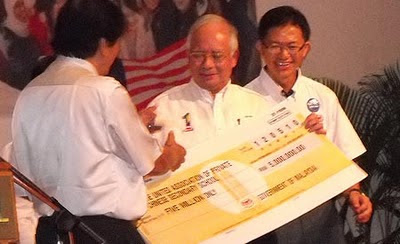 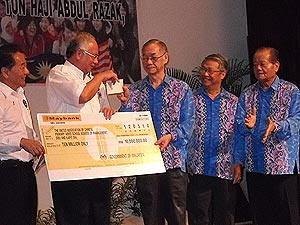 From the word 'Go', the Opposition was already campaigning at a disadvantage. SUPP/BN had everything going for them. They have a candidate who comes from a wealthy family, millions of ringgit were spent bribing the poor people of Sibu by the federal government, the msm in their usual journalistic style spun their stories in favour of the incumbent, threats of invoking the ISA by the PDRM to the Opposition should they raise the 'Allah' issue, the presence of the PM and DPM with the former having to make three trips to cover ground for his candidate; and until the last moment of ballot counting the Election Commission was trying to find a loophole to ensure the victory goes to the SUPP fellow by delaying the postal count. And still the BN lost. Even if the Opposition had lost, it was still a remarkable feat bearing in mind that they only weapon they had was true grit till the very end.
Denying the BN the two-third majority in Parliament is still very much intact and I am sure Jibby and his men will be conducting a post-mortem soon to figure out why money doesn't sell anymore.
The margin of victory may be small, 398, but it is a start to forfeit the fixed deposit of the BN.
Posted by Geronimo at 11:30 PM No comments: