DAP on the way to becoming a truly Malaysian party with multiracial compositions. The huge challenges facing the party are acceptance of non Chinese members, especially of leadership potential, by the grassroots leaders and ordinary members, impatience of non Chinese entrants in ascending the leadership hierarchy and demanding key positions and the dilution of the Chinese influence and dominance of the party. More importantly to fight the public perception that DAP is and always will be a chauvinistic Chinese party which UMNO spared no efforts to use it to frighten away Malay support.

The LKS and LGE team must be willing to change their approach to garner more non Chinese supports, in the process giving up absolute Chinese control of the party, for the sake of fighting UMNO and BN. It may take 2 terms to see a different DAP emerging. The squabble between DAP with PAS and recently with PKR shows the failure of the Pakatan coalition. In a democratic environment that Pakatan tries to grow, inter party feuds will mess up the larger goals to defeat BN. The only way is for a strong multiracial party to rule the nation away from the coalition model which is not workable as shown by BN. Budding leaders must not be self serving but work towards the larger good of the country and society.

This is what Zaid Ibrahim has to say about the current Opposition pact.

In the run-up to the 13th General Elections (GE14) in 2013, Lim Kit Siang apologised for the failure of the opposition pact to remain united and again when it failed to retain PAS within its fold.
Now he has apologised yet again for the failure of PKR and DAP to ensure a straight fight between the Opposition and Barisan Nasional in the Sarawak state election.

The opposition has always been fractious but to show its penchant for disunity in the way it has in the Sarawak election is unforgivable.

To see my friend Kit Siang having to grovel before Sarawakians because PKR would not do a deal with DAP is quite sad, so I have decided to invite Kit to a special dinner of Brittany oysters, Boston clam chowder and charcoal-roasted young lamb from Spain after the election.

During the dinner I will suggest the following:
1. Forget about electoral pact altogether. It did not work in GE13 and it has not worked in the Sarawak election. The best hope for a truly believable opposition pact is between DAP and Amanah. The two parties have a close affinity and should constitute the core Opposition. Any discussion on seat allocation will thus be more meaningful and the chances of both parties honouring the arrangement are better.
2. A DAP-Amanah pact can also have a loose arrangement with PKR (like ASEAN+2) for the purposes of organising joint-ceramah and to agree on some key areas for reform. Having a larger crowd can be morale-boosting for the Opposition and its followers but to have an electoral pact where seats are agreed beforehand between DAP-Amanah and PKR will be a waste of time and can lead to worse acrimony, much to the delight of the Barisan Nasional.
3. PKR is a party that believes one of its leaders will be the next Prime Minister after UMNO’s downfall. Some believe that Datuk Seri Anwar Ibrahim will be Prime Minister. If that happens, Nurul Izzah Anwar, Mohd Rafizi Ramli and Datuk Saifuddin Nasution Ismail will have important key positions. On the other hand, we have Datuk Seri Mohd Azmin Ali and friends who believe that PKR today is not the same as PKR in 2004 and that the party is already under their control, so they will make sure key decisions will be decided by them. PKR under Azmin will be flexible and it is not inconceivable that PKR+PAS or PKR+UMNO deserters will be on the menu for the consideration of voters.

Politicians must start offering Malaysians a credible political platform that has regard for the interests of the people. They need only form alliances with a view towards forming a government after they have obtained the mandate of the people when the General Election results are known.

There is no need to follow the Barisan-Nasional formula of ganging up to win as many seats as possible regardless of party manifesto. Horse-trading should be done only when the results are known.

Of course Kit Siang is a shrewd and wily politician of many years’ standing and it is possible that he will dismiss my arguments as out of hand. However, all I ask is that he should just listen to me for an hour or so over a nice dinner.
Posted by Geronimo at 6:53 AM No comments:

Instant KARMA working at its best in Malaysia ……??


1998 – Sri Raja Raja Madurai Veeran Temple in Kg Rawa, Anuar Ibrahim threatened the Hindus there to accept whatever he said, otherwise he said no temple bells will be sounded in Penang. Anuar Ibrahim was sacked as the Deputy Prime Minister in 1998 itself.


2009 – The Cow head protests were held in front of the Selangor state government headquarters at the Sultan Salahuddin Abdul Aziz Shah Building, Shah Alam, Malaysia on 28 August 2009. The protest was called so because the act of a few participants who brought along a cow head, which they later desecrated. The cow is considered a sacred animal to Hindus. Barisan Nasional again lost Selangor in 2013 General Elections

2016 – The 29-year-old man had smashed nine idols at The Sri Muneswaran Temple in Ipoh. Then he drove away from the temple but met with an accident in Fair Park a few kilometres away from the temple.
HINDU GODS don’t take revenge but you have to pay for your KARMA!!!  In Kali Yuga it’s instant.
Posted by Geronimo at 9:41 AM No comments:

Rara on her rounds in MPKj Zone 2 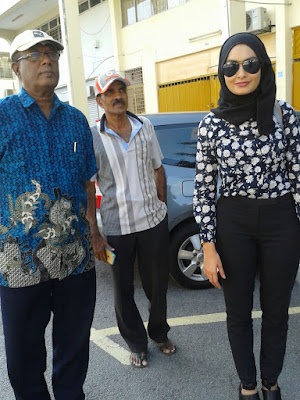 Posted by Geronimo at 5:55 PM No comments: