We were truly Malaysians once ....

With so much of politicising going on in the country these days, one can't help but to look back in fondness at a time when such hate mongering was non-existent. Today, there are groups who are prepared to bring the country to the brink of a major disaster, so long as political gain is achieved.  This is indeed a sorry state of affairs, more so when the prime minister has hardly say word to deter the hate mongers.

As I sit back, how well do I remember the days when I was in school when nobody referred to each other by race, but merely by name. There were times when we were in disagreement and had to resort to physical solutions to settle a dispute, still nobody called each other by race. Even at the most, my Malay or Indian friends would address me as "Chinaman" but not to the extent of using derogatory words such as "Cina Babi" or "Cina Kui".

If one was to look back, there was so much of camaraderie among us that we grew up respectful of each other's beliefs and culture. In schools, Muslims will have their own religious clubs and so did the Christians. There were no restrictions whatsoever that would have led to any resentment among the students. In every club, be it the debating society, the prefect board, the scout movement or in games, everyone participated irrespective of race. When punishments were meted out, everybody, especially the guilty ones, received his or her own fair share. No favoritism whatsoever.  Today, you cane a student, be it Chinese, Malay or Indians, and you will find a host of NGOs protesting against such 'inhumane' act and demand that the Ministry take action against the headmaster or teacher concerned.

In the canteen, during recess, we ate and chatted together. Halal, non-halal, never heard of those words before, but the canteen caretaker knew precisely the kind of food he needed to prepare, especially for the Muslim students. We didn't need any halal sticker on the canteen wall either.

In other words, we were colour blind most of the time. Our classrooms were the places where we learn and appreciate each other, other than just merely places to acquire knowledge. The mix continued even outside of school when I formed my first band in 1964, two of my bandmates were Malay and we even played at Chinese restaurants which by today's standard are considered 'haram'.

There were times when we would adjourn to a friend's home to do our homework or group studies after school, and this friend could be a Christian. None of my Malay friends would have given it a thought that this Christian friend would stealthily go out to convert them. Proselytisation? Such a big word then. Never heard of it.

Here is a photo of my classmates taken in November 1963 when we were in Form 3 at the Cochrane Road Seconday School. You can easily what a mixed group we were. From left to right : Ramli Awang, Stephen Yap, Hardev Singh, Seik Fei, Kooi Seong and Idrus Wahid. Other than the rest who have since retired, Hardev Singh went on to become a teacher for two years after leaving school before joining the army to serve his country. He rose to the rank of 'Captain' and was attached with the Rangers. During his tenure with the military, he was involved in active duty in East Malaysia fighting the Commies, but was tragically killed in 1974 at the Thai border when he went in with a convoy to rescue another convoy which was ambushed earlier.

Will we get to see such Malaysianess in us again? The answer lies with the government to bring back that spirit back in all of us. This will provide the very beacon for our next generation to live that we are all Malaysians in heart and soul.
Posted by Geronimo at 7:45 PM 1 comment:

Wah, look at these UMNO Baru fellas protesting just because someone from DAP did a kangkung thingy on Najib .... 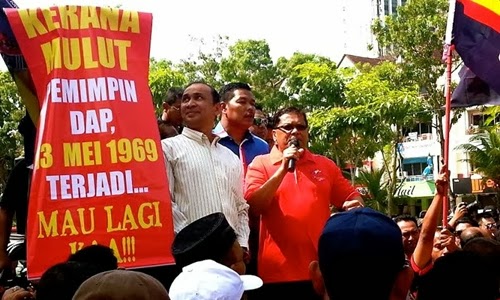 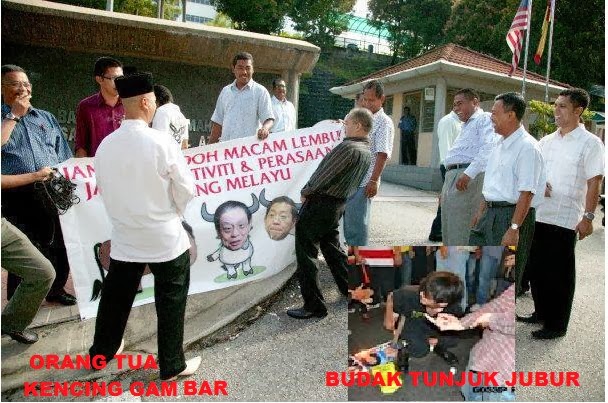 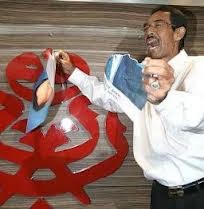 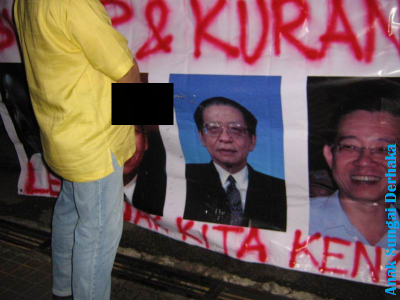 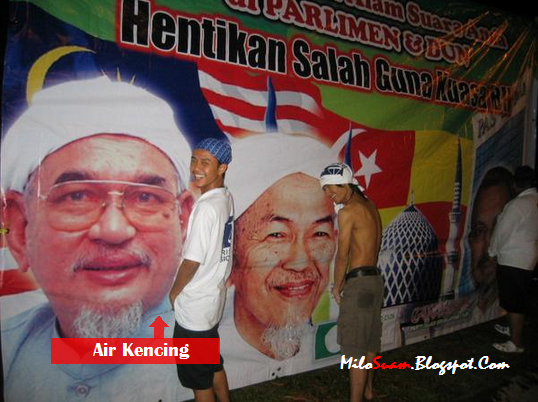 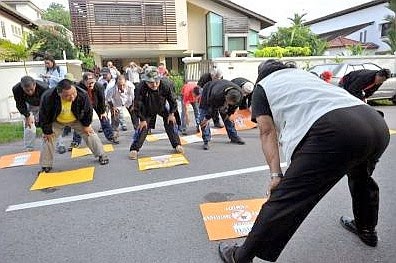 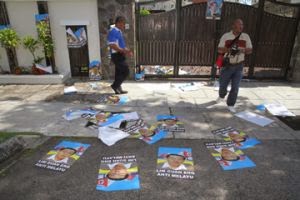 But why is UMNO Baru blaming only the Chinese for "insulting" Najib? What about the following picture?