Get your yellow T-shirt ready. BERSIH2 may just happen.

Tomorrow begins the 56th PAS convention in Kelantan, the political bastion of the oldest Islamic party in the country.

From being a beacon of light and religion for the devout Muslims, it is now carving a vision of hope for multi-religious Malaysia. Leading this agenda is the new generation of women and youths and non-Muslim supporters.

PAS has formed its non-Muslim wing whose members will observe the proceedings this time around, while its Youth and women wings will chart the next course of action for the 13th general election.

Said PAS Youth convention chief Suhaizan Kaiat: “We will not wait. We will act, in a collective fashion, the way we have moved our people on the ground over the sports betting issue.”

Sports betting is expected to be the hottest and most exciting topic at the convention. PAS youths have been at the forefront of the campaign against gambling.

“We demand that the government revoke the licence legalising sports betting,” said Suhaizan, referring to the the permit issued to Berjaya Corporation Group (BCG) in time for the the World Cup football season which kicks off on Friday in South Africa.

The federal government is reportedly expected to rake in RM60 billion in tax revenue from a wide range of betting activities as the World Cup gets under way. BCG has said that apart from retail outlet sales, there will also be online and telephone betting facilities.

Both Prime Minister Najib Tun Razak and BCG’s Vincent Tan have come under tremendous public pressure over the issue.

While during the day delegates will rip apart and dissect the federal government’s “socially destructive” decision, the nights will be a gathering of like-minded souls in sports and prayer in this Islamic state, which has been under PAS rule for over 20 years.

“Sports betting is only second to our top issue, which is the Bersih 2 gathering.

“In November 2007, our Bersih gathering had urged the Umno-Barisan Nasional government to fulfil our four demands. But to date nothing has happened.

‘In this convention, we will urge the PAS leadership to hold a Bersih 2 assembly,” said Suhaizan.

Bersih is a coalition of NGOS for a clean and free election. Its four-point demand included the use of permanent ink, an electoral list clean-up, abolishing postal votes, and ensuring press freedom.

During Bersih’s first gathering on Nov 10, 2007 some 100,000 Malaysians had marched to Istana Negara to hand over a memorandum to the King.

It was a historic movement of people. This, together with the Hindraf rally, set the pace for an unprecedented shift in the country’s political landscape.

PAS together with PKR and DAP under the Pakatan Rakyat coalition banner wrested five states in the 2008 general election. However, within months of its victory the coalition lost Perak to BN in a reverse takeover.

Najib had last month agreed to shift KTMB from Tanjung Pagar to Woodlands.

Najib had reportedly said that KTMB’s railway land in Tanjung Pagar would be swapped for land parcels in two of Singapore's most expensive districts, including the site of the multibillion-dollar Marina Bay Sands casino complex which opened in April.

Said Suhaizan: “ The PM said he will discuss the matter with Singapore.

“We want to know what is going to be discussed since he has already made the deal. We don’t want Malaysia to lose out.

Posted by Geronimo at 4:14 PM No comments: 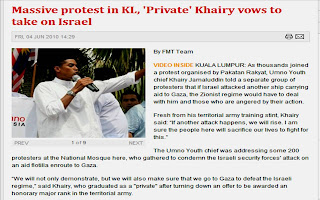 When I read the news report (left), I almost had a fit. If the Syrians, Saudis, Jordanians, Egyptians, Turkish and the Libyans put together and still could not bring Israel to its knees, what makes our "Rambo" Khairy think that he and his pampered UMNO Youth are able to do so? To think that with only one month in training with the Territorial Army he is ready to take on Israel? Why doesn't he try Singapore for size?
Israeli Commanders and Navy Seals were simply shaken and sweating profusely when they heard 'Major' Khairy issuing the following ultimatum:

“If another attack happens, we [Malaysian] will rise. I am sure the [Malaysian] people here will sacrifice our lives to fight for this.”

"Major" Khairy assured everyone that:

“if Israel attacked another ship heading to Gaza, the Zionist regime would have to deal with him.”
"We will not only demonstrate, but we will also make sure that we go to Gaza to defeat the Israeli regime,” said Khairy, who graduated as a "major" [an honorary rank].

"We are ready to go there ourselves to help in Gaza. We hope the Malaysian government allows more ships, 10, 20 or even 100. We want to open the eyes of the world to what has happened,” he added.

On whether he will be proposing for more ships to be sent to Gaza, Khairy said he will discuss this with Prime Minister Najib Tun Razak and other NGOs such as Perkasa.

"Our fight doesn't just stop here. Imagine if 100 ships from all over the world go over, how can they stop us. If we have strength in numbers, Umno Youth and everyone will all go," he said.

Asked if he is prepared to go, Khairy replied: "Of course."
If I were Khairy, I would think twice before he goes around organising an armada of 100 ships to invade Israel. Israel is a nation who has been on a war footing for the last 60 years and many of its citizens are battle hardened, well armed and trained in the use of all form of weaponary. I bet you before the armada could reach 100 miles from the Israel shores, Israel would have launched torpedoes and missiles to blow the ships out of the waters.
Posted by Geronimo at 4:15 PM 1 comment:

Instead of posting text humuour today, I have decided to post some interesting videos depicting quirky behaviours of our locals, especially the Chinese. Pleasant viewing!
What is Manglish?
Placing a catering order with "Auntie"
Why you so like that?
The Singapore Tunnel to Johore Bahru
James Bond speaks Hokkien in "Die Another Day"
Russell Peters on cheap Chinese
Posted by Geronimo at 7:48 AM No comments: