Posted by Geronimo at 9:08 PM No comments:

Najib doesn't respect the decision of the election process

The following news article appeared in the Malaysiakini.

MCA president Dr Chua Soi Lek is said to have told the party's central committee meeting yesterday that he will resign if the BN fields arch-rival Ong Tee Keat in the Pandan parliamentary constituency.

As for Chua himself, a minister before he stepped down in 2008 due to a sex scandal, the Chinese daily claimed that he will contest but that the seat has yet to be revealed.

Treasurer Tan Chai Ho (left), who was defeated by Selangor Menteri Besar Abdul Khalid Ibrahim in the Bandar Tun Razak parliamentary seat in 2008 by 2,515 votes, will be given a chance to avenge his loss in the same seat.

The MCA has agreed to give two parliamentary seats - Wangsa Maju and Kuantan - to Umno but it was not clearly stated whether this involves a seat swap.

MCA will call another meeting on Thursday to finalise the list, according to the report.

Kong told China Press that he was not aware of the decision to remove him as a candidate.

Deputy president Liow Tiong Lai, meanwhile, claimed that yesterday’s meeting did not discuss the issues of candidates and seat swap.

“Will it be the last central committee meeting? It seems like the last meeting,” Liow is quoted as saying.
Chua today echoed his deputy that the party meeting yesterday did not discuss the issue of candidacy.
"The news report in a vernacular paper today is misleading and irresponsible," he said in a tweet posting.

Gobind Singh: Time Has Come, Pakatan Rakyat Have Leaders That Can Take On Barisan Nasional Anytime

For Mahathir, the end justifies the means

Former Sandakan district officer Hassnar Ebrahim has admitted to being involved in ‘Project IC’ in Sabah in the 1980s - and he also claims he heard the scheme had been approved by then prime minister Dr Mahathir Mohamad.

Hassnar (left) said he was at a “secret meeting” in the 1980s, at which then Deputy Home Minister Megat Junid Megat Ayub had “openly admitted Mahathir’s involvement”.

Hassnar, 62, said this last night at a forum on the Sulu incursion into Lahad Datu, Sabah. The event was organised by Solidariti Anak Muda Malaysia (SAMM) at the Kuala Lumpur and Selangor Chinese Assembly Hall.

Now the PKR Batu Sapi chief, he told those present that the scheme to accord citizenship to Muslim immigrants was started in the early 1980s.

"Back then, Chinese voters represented the pendulum swing and would decide which party wins the state election,” Hassnar explained.

“So, there was this feeling that the presence of Muslims in the state must be solidified to ensure that the state remained in the hands of Muslims.”

Hassnar recounted that, on his first full day as the Sandakan district officer in 1982 - a post that he took upon the insistence of then Sabah chief Minister Harris Salleh (right) - he was instructed to sign 500 citizenship registration forms that did not have the particulars of the applicants.

When approached by Megat Junid to help make Project IC a success, Hassnar said, he tried to coax then Sabah NRD chief Sani Adnan to help, but that the latter expressed disgust at the idea.

"These are the people who will ruin this state later, Sani told me," Hassnar said.

Despite years of helping the federal government in the project, Hassnar was detained under the Internal Security Act in 1988 for 59 days.

"Megat Junid called me to Kuala Lumpur one day and he told me that Parti Bersatu Sabah (PBS) and BN were negotiating the possibility of PBS rejoining BN. One of the conditions then PBS leader Joseph Pairin Kitingan had laid down to BN was to get me arrested," he said.

He was subsequently arrested at the airport while trying to take a flight back to Sabah.

According to Hassnar, the rarely talked-about Silent Riot that took place in Kota Kinabalu on March 18,1986, after the BN-backed Parti Berjaya unexpectedly lost the 1985 state election to PBS, had been orchestrated by Umno top guns.

"We were told to take to the streets and demonstrate. Mahathir had apparently said that it was okay even if one or two casualties occurred," Hassnar claimed.

However, the riot did not go the way Hassnar and his comrades had expected.

Five people died and some 1,200 people were arrested, including Harris.

"We were fined RM100 each, but Harris challenged the fine. He was willing to take the matter to court and threatened to expose the truth if the authorities pressed further. He was the only one to be released without any charge," he added.

Hassnar lamented the fact that he had been imprisoned even though he had aided the federal government in the covert Project IC.

"All I would say is, don't be friends with people from Umno," he said.

So what did Mahathir mean by 'casualties'?  People getting killed during the demonstration? If it is so, then I guess it is okay if death occur, so long as he ends up controlling the state.  This is madness and demonic!
Posted by Geronimo at 7:59 PM No comments:

Rafizi Ramli: Only Way Najib To Cling On To Power Is To Cheat & Blackmail The People

We may need this man as our military advisor

As reported in the Malaysia Chronicle, Mahathir was quoted as saying, "If the Malaysian armed forces do not adopt guerrilla warfare, I am worried that we may not be able to withstand a bigger attack than what is happening now (in Lahad Datu). Guerrilla warfare is different from conventional warfare and if we do not increase our skills in guerrilla warfare, there is a possibility that our country cannot be saved."  See rest of news report here.

If this is the case, then UMNO should consider calling this man for the job and offer him the post of Military Advisor.  His years in guerilla warfare against both the Japanese and the British would put him in good stead to impart his skill to our men at the front line.  What say you, Najib?  The name of this person?  Chin Peng. 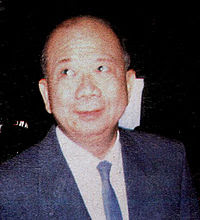 Starting today, I will be featuring videos of some of the past ceramahs held by Pakatan leaders to remind ourselves of our duty come GE13.

Nurul Izzah: Once And For All, We Kick This Political Parasite Out Of Our Country