What with the shooting down of flight MH17, the Israeli counter-offensive against Hamas in the Gaza strip, the impending famine caused by the civil war in South Sudan, ongoing civil conflicts in Syria, Iraq and elsewhere, and the revelation that most of the schoolgirls kidnapped months ago by Boka Haram have yet to be rescued by the Nigerian government, there hasn’t been a lot to laugh about this past week or two.
In fact the world news has been so unremittingly grim and depressing, and has called so overwhelmingly on our funds of sorrow for the dead and sympathy for the bereaved, as to bring fresh dimensions of meaning to that chilling term often employed by charities for a slump in donor generosity during such times as these, ‘compassion fatigue’.

So it has been a bit of a relief to find a chuckle or two, however grim and cynical, wherever we can. And there has been plenty of them going around.

My personal favourite recently has been Malaysian Defence Minister Hishammuddin Hussein’s laughable statement as reported by BN regime mouthpiece ‘news’ agency Bernama that he was “awed” by the way in which his cousin, Malaysian Prime Minister Najib Abdul Razak, has handled the MH17 tragedy.
I was awed too, though not so much by what Hishammuddin ludicrously extolled as Najib’s “courage not to be swayed by the geopolitical landscape in that (Ukrainian) region and to only focus on the objective, which is to bring home the bodies of Malaysian passengers, take hold of the black boxes and bring those responsible to justice,” but by the hilarious hypocrisy of Najib’s sudden interest in justice.

On an international level, Najib and his BN accomplices have long shown themselves to be so resolutely opposed to justice in principle and practice that, like the USA, China, Russia, India and Israel and other similarly arrogant and errant nations, Malaysia is still refusing to accept the authority of the international Criminal Court.

And domestically the state of Malaysian ‘justice’ is if possible even more dire, as evidenced by countless cases, notably the murder of Mongolian translator Altantuya Shaaribuu, the deeply suspicious deaths of Teoh Beng Hock and others in in the custody of the Malaysian Anti-Corruption Commission, and the endless trials of Anwar Ibrahim on trumped-up sodomy charges.

And of course in urging “justice” for those guilty of the MH17 tragedy, Najib is also conveniently ‘forgetting’ that he has demonstrated no interest whatever in justice for culpable parties in the mysterious ‘disappearance’ of MH370, or for those responsible for the deaths of the equivalent of several planeloads of ‘suspects’ at the hands of the Malaysian police, or, for that matter, for the literally countless members and cronies of the BN regime responsible for crimes ranging from the systematic, massive looting of the nation’s natural resources and public funds to the suppression and falsification of the news and the stealing of elections.

Saving his own political skin

In short, in urging justice for Malaysia, or as the official regime-issued T-shirt for BN supporters expresses this allegedly “awesome” sentiment, “Justice 4M17”, for many if not the majority of us, Najib is clownishly highlighting the fact that he has never had, or ever will have, any interest whatever in equitable justice for all Malaysians, but is simply hell-bent on saving his own political skin.

And even more amusing, if sick humour happens to be your thing, is that there seems to be scant promise of any improvement on the BN regime’s record in this regard if and when Pakatan Rakyat ever comes to power, considering the horribly hilarious contribution by opposition party PAS to the MH17 justice discussion.

Kedah PAS youth information chief Ahmad Tarmizi Sulaiman (right) urged that MAS and the government to look into the possibility that the MH370 and MH17 tragedies may have been to the wreaking of “Allah’s wrath in the bellies of the planes” as a result of the airline’s serving of alcohol to passengers and dressing its flight attendants in a manner that he claims to be a contrary to Islamic rules.

“Flying in a MAS plane does not give passengers the feeling of an airline operated by a country which organises the annual Quran recital competition,” he continued, “and in fact, even winning the competition.”
He later falsely claimed that his statement had been quoted out of context and thus misrepresented, but in a subsequent emergency sitting of Parliament on the MH17 tragedy, another PAS jester, Rantau Panjang MP Siti Zailah Mohd Yusoff, made similar remarks about observing Muslim strictures against alcohol and improper dressing of female flight attendants, adding that “we may have advanced technologies, but this matter should not be viewed lightly. We cannot stop Allah’s might.”

Meanwhile, a great many other assorted jokers around the world were blaming the MH17 shoot-down not on Allah, but an earthly power who seems to consider himself as somewhat akin to God almighty, Russia’s Vladimir Putin, and threatening him and his criminal Kremlin regime with economic and travel sanctions.

The laugh is as much on accusers

But in this the laugh was as much on many of Putin’s (left) accusers as the chief suspect himself, as many European countries including the UK and France are suppliers of weapons to Russia, or dependent on this pariah state for their energy supplies.

And the current government of my own country, Australia, which proposed a UN resolution condemning Russia for its alleged role in the MH17 atrocity, has a far-from-glorious record in its dealings with asylum-seekers, having recently sent some of these desperate people back to their abusers in Sri Lanka, and threatened others with re-settlement in such hell-holes as Cambodia and Papua New Guinea.

But the greatest jester of all in the international justice department is surely the US, whose record of double-dealing and hypocrisy and selective, self-interested and frequently inept and ultimately catastrophic alliances and aggressions are an increasingly notorious joke.

In short, as richly as the victims of the MH17 atrocity and their surviving loved-ones deserve justice to be done, I don’t like the chances of its being done fully, honestly and transparently by Russia or by its assorted allies and antagonists.

Any more than I expect to see justice for those lost and left behind by the disappearance of MH370, which the bad jokes who pretend to run Malaysia failed to scramble their Putin-provided Russian fighters to intercept and track, and have made a jest of justice for Malaysian citizens in every other conceivable respect.

[DEAN JOHNS, after many years in Asia, currently lives with his Malaysian-born wife and daughter in Sydney, where he coaches and mentors writers and authors and practises as a writing therapist. Published books of his columns for Malaysiakini include ‘Mad about Malaysia', ‘Even Madder about Malaysia', ‘Missing Malaysia', ‘1Malaysia.con’ and ‘Malaysia Mania’.]

Posted by Geronimo at 4:41 PM No comments:

Now that it has been reported that the missile that brought down MH 17 was from Russia, will PERKASA, ISMA, JATI, PERKIDA, PAS, etc be protesting in front of the Russian embassy with the same gusto, zeal and enthusiasm as they did a few days ago in front of the American embassy in protest against the inhumane treatment on the people of Gaza by Israel? After all, 44 Malaysian lives (Malays included) were lost needlessly in the MH 17 tragedy, while there were none in the Gaza incident.

While I, like many fair minded Malaysians, deplore the brutality of the Israeli government, but on our part, let's have a sense of priority here, if you don't mind? If one can feel so much for someone thousands of miles away, what about those who are your own countrymen? 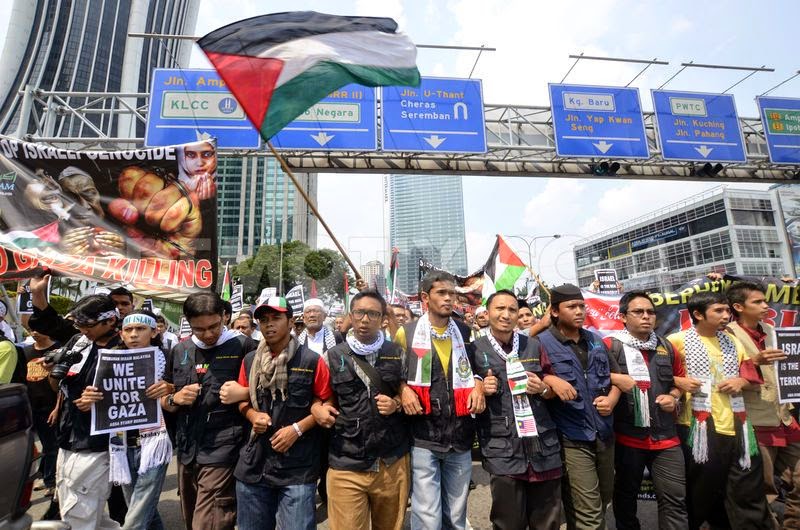 That is me (see pix below) with a group of travel agent invitees sampling the services of the first MAS demo flight to Hong Kong on September 17 1972. The photo was taken at the Kai Tak International Airport after our disembarkation.

As agents we were eager to see our newly born national airline succeed, giving other regional airlines, especially Singapore Airlines, a run for their money, and succeeded it did under the helmanship of the then General Manager, Saw Huat Lye (now Tan Sri). He took the airline to great heights and we were proud to be part of the airline's achievement.


In 1982, I represented my company, Diners World Travel (a division of Diners Club) in receiving the best sales award for travel agents from MAS. That was the kind of loyal support we gave to our own national airline.

Forty two years later, every thing has gone so very wrong, and I together with many of my fellow travel agents of that era, can only lament at what is unfolding before us today. 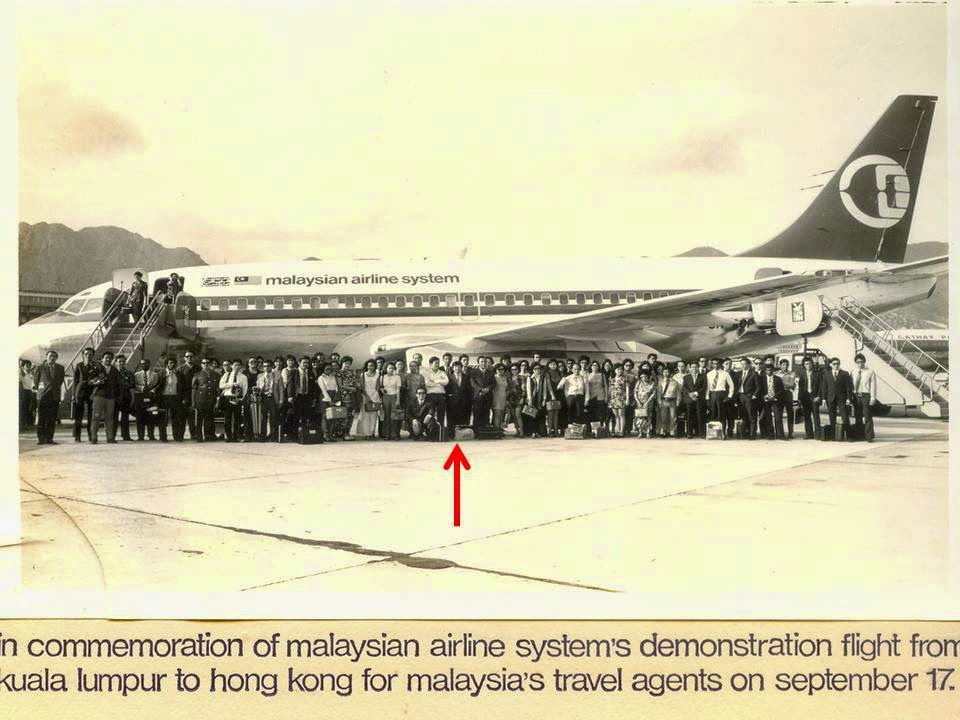 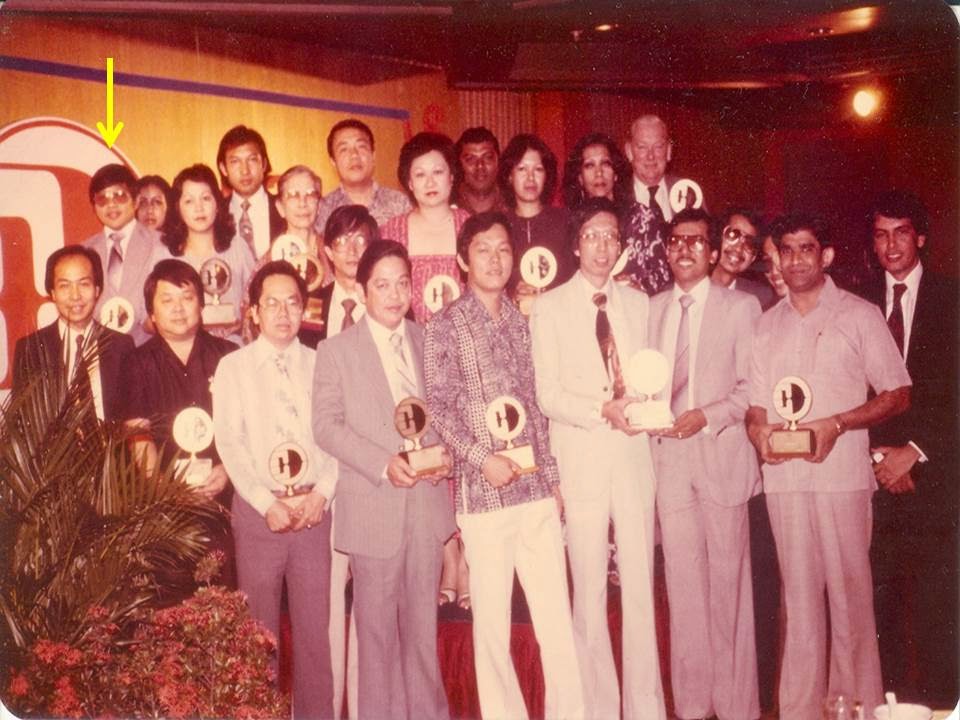 Posted by Geronimo at 9:41 PM No comments: