Whenever I hear the following two tunes, I just realised how much I miss the Malaysia of old.  This was the time, in the 60s, when our country was peaceful and all lived as one, not so equal, but then we were happy and not enveloped by anxiety and stress caused by certain irresponsible politicians.

If you start with a cage containing five monkeys and inside the
cage, hang a banana on a string from the top and then you place a set
of stairs under the banana, before long a monkey will go to the
stairs and climb toward the banana.

As soon as he touches the stairs, you spray all the other monkeys
with cold water.

Now, put the cold water away.

Remove one monkey from the cage and replace it with a new one.
The new monkey sees the banana and attempts to climb the
stairs. To his shock, all of the other monkeys beat the crap out of
him. After another attempt and attack, he knows that if he tries to
climb the stairs he will be assaulted.

Next, remove another of the original five monkeys, replacing it
with a new one.

The newcomer goes to the stairs and is attacked. The previous
newcomer takes part in the punishment...... with enthusiasm, because
he is now part of the "team".

Then, replace a third original monkey with a new one, followed by
the fourth, then the fifth. Every time the newest monkey takes to the
stairs he is attacked.

Now, the monkeys that are beating him up have no idea why they
were not permitted to climb the stairs. Neither do they know why they
are participating in the beating of the newest monkey.

Finally, having replaced all of the original monkeys, none of the
remaining monkeys will have ever been sprayed with cold water.
Nevertheless, not one of the monkeys will try to climb the stairway
for the banana.

Why, you ask? Because in their minds...that is the way it has
always been!

This, my friends, is how Parliament operates... and this is

why, from time to time: ALL of the monkeys need to be REPLACED AT THE SAME TIME.

What are you waiting for? Vote all the monkeys out from Parliament in the coming General Election or any By-Election..........

Posted by Geronimo at 7:22 PM No comments:

AUSTRALIAN TOURISM PROMOTIONS
I bet Yen Yen could not have come out with a better one than this.
﻿
﻿
﻿ 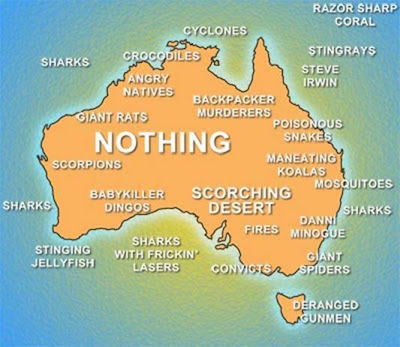 These were posted on an Australian Tourism Website and the answers are the actual responses by the website officials, who obviously have a great sense of humour not to mention a low tolerance threshold for cretins!

Q: Are there any ATMs (cash machines) in Australia ? Can you send me a list of them in Brisbane , Cairns , Townsville and Hervey Bay ? ( UK ) A: What did your last slave die of?

Q: Can you give me some information about hippo racing in Australia ? ( USA )

Q: Can I wear high heels in Australia ? ( UK )
A: You are a British politician, right?

Q:Please send a list of all doctors in Australia who can dispense rattlesnake serum. ( USA )
A: Rattlesnakes live in A-meri-ca which is where YOU come from.
All Australian snakes are perfectly harmless, can be safely handled and make good pets.

Q: Will I be able to speak English most places I go? ( USA )
A: Yes, but you'll have to learn it first


They say that marriage makes a man dizzy, and it's true.
As soon as I got a wife, I lost my balance at the bank.


Q: Why do women live longer than men?
A: Shopping never causes heart attacks, but paying the bill does!

Getting married is very much like going to a restaurant with friends.
You order what you want, and then when you see what the other person
has, you wish you had ordered that.


Man: Is there any way for long life?
Dr : Get married.
Man: Will it help?
Dr : No, but the thought of long life will never come.


Why do couples hold hands during their wedding?
It's a formality just like two boxers shaking hands before the fight begins!


Wife: Darling, today is our anniversary, what should we do?
Husband: Let us stand in silence for 2 minutes.


What did the gangster's son tell his dad when he failed his examination?
'Dad, they questioned me for 3 hours, but I never told them anything!!'


When I was young I used to pray for a bike,
then I realized that God doesn't work that way,
so I stole a bike and prayed for forgiveness.


A little boy went up to his father and asked :
'Dad, where did all of my intelligence come from?'
His father replied:
'Well, son, you must have gotten it from your mother, because I still have mine.'


Jimmy's teacher sent a note home to his mother, saying :
'Jimmy seems to be a very bright boy, but spends too much of his time thinking about girls.'
The mother wrote back the next day:
'If you find a solution, please advise. I have the same problem with his father!'

Posted by Geronimo at 7:52 AM No comments:

The Sikhs of Joshimath, a small town in the state of Uttarakhand, have set an example by allowing the Muslim community to offer prayer at their Gurdwara on the occasion of Eid-ul-Fitr, Indian media reported.

Every year, Muslims congregate at the Gandhi Maidan in the town but this time it was raining heavily and the ground was consequently slushy. Hence, Sardar Buta Singh who is the gurdwara's prabandhak informed that its main hall can be used by the Muslims to offer prayers.

Accepting the large-hearted invitation, many of the town's Muslim residents entered the gurdwara at 9.30 a.m and participated in the Eid namaaz. Subsequently the Sikhs and the Muslims embraced each other.

Some Hindus too joined in the Eid celebrations there.

Afterwards, Sardar Buta Singh said that he had invited the Muslims to the gurdwara since they were not able to offer worship in the open due to the downpour.

Hailing the Gurdwara committee's exemplary humanity, Maulvi Asif thanked it for the solving the problem which the Muslims had been facing. He added that the committee had shown everyone how to respect all religions. 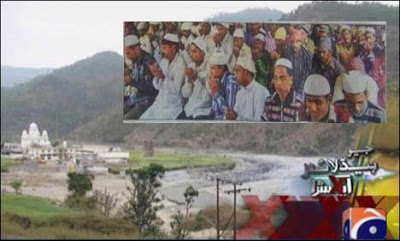 Joshimath, 250 kms away from Rishikesh, is situated near two famous places of worship - Badrinath and Hemkunt Sahib. Millions of Hindus flock to the former all throughout the year while the latter is an important pilgrimage centre of Sikhs.

A wonderful gesture by our Sikh brethren.  However, if the Sikhs, Buddhists or Christians need a place to worship, I wonder whether such an offer would come from our Muslim leaders here.  Food for thought, though.
Posted by Geronimo at 5:55 PM No comments:

Posted by Geronimo at 6:54 AM No comments: