The family of Teoh Beng Hock must have been severely traumatised to learn of the death of Teoh after he has gone to the MACC office in the late afternoon and only to be found dead the next day. He was availing himself at the MACC office as a witness to answer questions relating to the alleged mis-spending of state funds by his boss.
The ensuring videos will give viewers a stark reality of how far we have fallen in terms of humanity when a human life can be snuffed out in seconds by officers of certain government agencies.
The racist tones used by the interrogators were also unbecoming when they themselves are even worse when they should be adhering to certain rules of conduct when questioning suspects. Like they say, "It breeds from the top".
In the first video, you can see Malays, Chinese and Indians demonstrating together, against the unruly behaviour of the police under CPO Khalid Abu Bakar, If a protestor can shout back at the CPO using words such as
"Shame on you. Go to hell!" and "bastard", that already speaks volume for the kind of espect left for our men in blue.
I believe all Malaysian rakyat will now want the MACC to report direct to Parliament instead of the Prime Minister. If this is not done, more suspects and witnesses will be heading for a one way journey to either the police station or the MACC office.
My deep condolence to the Teoh family and may justice be served. Now let's see how fast they will act on Toyo.
Posted by Geronimo at 5:19 PM No comments:

A group of former senior MCA leaders from Johore including a former minister will soon join the opposition PKR.

They are expected to announce their decisions to leave the party and apply and join the PKR on July 18 (Saturday) in Kuala Lumpur.

Many are Anwar's old friends

The sources said the group met Anwar Ibrahim's aides to convey their wish to support PKR as they have lost confidence in the Barisan Nasional.

The sources did not say whether they have already met the PKR advisor and parliamentary opposition leader. But Anwar is said to have accepted their decision and open the PKR's door to the former MCA leaders, many who are his old friends.

“Anwar is more than happy to welcome his old friends into PKR. All of them will have a role to play in the party,” a PKR leader in Kuala Lumpur said.

However, a check with a senior party leader in the PKR headquarters in Petaling Jaya drew a blank.

“I have no idea about this. Maybe it is true, maybe it isn’t”, was all he would say when reached on the phone.

Apparently, party staff have been asked to keep such matters under wraps but that is not going to prevent a leakage.

PKR sources in Sarawak, however, are more open about unhappy BN ‘big guns’ joining their party.

“Chua Jui Meng’s entry into PKR will be a major morale booster for PKR and Pakatan Rakyat. Wait for Sunday. Chua and his group will join PKR,” one state PKR leader said confidently.

Anwar is expected to be present at the press conference this weekend where the formal announcement on their decision to leave MCA and join PKR will be made.

Chua is following the footsteps of other Chinese politicians in MCA and Gerakan who had joined PKR since the party’s good showing in the 2008 general election. MCA’s former deputy Wanita leader Dr Tan Yew Kew (left) and former Gerakan veep Dr Tan Tee Kwong (right) are now in the PKR fold. Both are considered relatively ‘big guns’ in the BN as they had previously served in the Cabinet.

Malaysian Mirror understands the Chinese group decided to join PKR because of its multi-racial character and policies, although the party is led by a Malay.
Posted by Geronimo at 5:46 AM No comments:

Kudos to Khalid and his team

The Selangor Pakatan Rakyat state government has bagged a 64 percent approval rating, according to a recent survey by independent pollsters Merdeka Centre.

The rating of respondents of Chinese and Indian origin stood at 69 percent, while 59 percent of Malays had a similar response.

Some 60 percent of respondents felt that the state is heading in the right direction, while 58 percent are satisfied by the government's management of the economy.

The survey, commissioned by the state government, also showed that 63 percent of respondents are satisfied with Menteri Besar Khalid Ibrahim's performance, while 19 percent have expressed dissatisfaction.

The timing of the release of the findings, however, has raised suspicion that it was a move by Khalid to scuttle plans by Selangor Backbenchers Club chairperson Azmin Ali, to push for a reshuffle of the state cabinet.

Azmin's outburst last Thursday against the state government during the state legislative assembly sitting has also raised speculation that he is trying to undermine Khalid's leadership.

Asked on Monday if there are plans to replace Khalid, a curt Azmin replied “No comment”. It was significant that he did not deny any such plan.

In a statement, the press secretariat of the Menteri Besar's office attributed the good ratings mainly to the “state's welfare programmes, transparent and efficient administration and reduction of corruption”.

It said the survey has identified weaknesses, including the lack of communication outlets, awareness of various programmes, reduction of red tape and provision of services.

Pakatan swept to power after the March 2008 general election. The coalition currently holds 36 of 56 seats in the state assembly.
[Source: Malaysiakini]
Posted by Geronimo at 10:44 PM No comments:

Posted by Geronimo at 3:42 PM No comments: 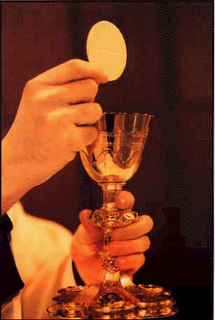 "Whoever, therefore, eats the bread or drinks the cup of the Lord in an unworthy manner will be guilty of profaning the body and blood of the Lord."

1 Corinthians 11:27
This is the police report made against the acitivities carried out by the two reporters from the Al Islam magazine. Click on the pictures to enlarge. 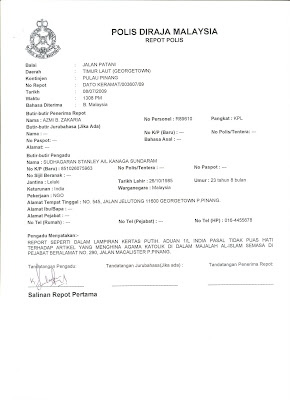 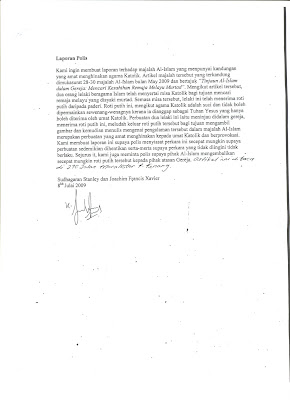 Posted by Geronimo at 7:40 AM No comments: