Not happy? You can send your children overseas to study 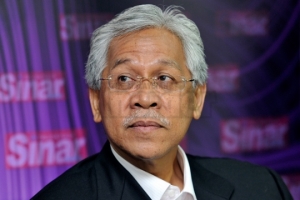 Those who have no confidence in the country’s education system as outlined in the National Education Blueprint can send their children to study abroad, said Education Minister II Datuk Seri Idris Jusoh (pic).

“If some people feel the system is not good and want to send their children overseas to study, the government cannot stop them. But the Ministry will work towards improving the country’s education system," said Idris after a forum in Shah Alam today.

Idris Jusoh, you must be a very happy man to know that your own BN leaders have already shown that they themselves are not happy with the education system here and have long been sending their children all over the world to be educated except in their own country.  So, what say you, eh?
Posted by Geronimo at 9:36 PM No comments:

Why blame the Jews?

Look at the picture below.  I am just wondering what has the Jews got to do with the "Allah" dispute that is currently going on in our Court of Appeal.  That really shows the ignorance of the UMNO Baru Muslims who have yet to globalise the way they think.  On this account, UMNO Baru have won hands down by keeping their minds under wrap so in their ignorance, they will continue to vote for them.  With all the showmanship at the Court of Appeal this morning by these Muslim groups, one needs to ask whether we should take them seriously.

While on the subject of the Jews, here is an interesting article written by one

Abdulateef Al Mulhim who retired from the Royal Saudi Navy with the rank of Commodore and writes regularly for Arab News.
He poses interesting questions and a challenge for the Arab world.
Arab Spring and the Israeli enemy
Thirty-nine years ago, on Oct. 6, 1973, the third major war between the Arabs and Israel broke out. The war lasted only 20 days. The two sides were engaged in two other major wars, in 1948 and 1967.

The 1967 War lasted only six days. But, these three wars were not the only Arab-Israel confrontations. From the period of 1948 and to this day many confrontations have taken place. Some of them were small clashes and many of them were full-scale battles, but there were no major wars apart from the ones mentioned above. The Arab-Israeli conflict is the most complicated conflict the world ever experienced. On the anniversary of the 1973 War between the Arab and the Israelis, many people in the Arab world are beginning to ask many questions about the past, present and the future with regard to the Arab-Israeli conflict.

The questions now are: What was the real cost of these wars to the Arab world and its people. And the harder question that no Arab national wants to ask is: What was the real cost for not recognizing Israel in 1948 and why didn’t the Arab states spend their assets on education, health care and the infrastructures instead of wars? But, the hardest question that no Arab national wants to hear is whether Israel is the real enemy of the Arab world and the Arab people.

I decided to write this article after I saw photos and reports about a starving child in Yemen, a burned ancient Aleppo souk in Syria, the under developed Sinai in Egypt, car bombs in Iraq and the destroyed buildings in Libya. The photos and the reports were shown on the Al-Arabiya network, which is the most watched and respected news outlet in the Middle East.
The common thing among all what I saw is that the destruction and the atrocities are not done by an outside enemy. The starvation, the killings and the destruction in these Arab countries are done by the same hands that are supposed to protect and build the unity of these countries and safeguard the people of these countries. So, the question now is that who is the real enemy of the Arab world?
The Arab world wasted hundreds of billions of dollars and lost tens of thousands of innocent lives fighting Israel, which they considered is their sworn enemy, an enemy whose existence they never recognized. The Arab world has many enemies and Israel should have been at the bottom of the list. The real enemies of the Arab world are corruption, lack of good education, lack of good health care, lack of freedom, lack of respect for the human lives and finally, the Arab world had many dictators who used the Arab-Israeli conflict to suppress their own people. These dictators’ atrocities against their own people are far worse than all the full-scale Arab-Israeli wars.

In the past, we have talked about why some Israeli soldiers attack and mistreat Palestinians. Also, we saw Israeli planes and tanks attack various Arab countries. But, do these attacks match the current atrocities being committed by some Arab states against their own people?!

In Syria, the atrocities are beyond anybody’s imaginations?
And, aren’t the Iraqis the ones who are destroying their own country?
Wasn’t it Tunisia’s dictator who was able to steal 13 billion dollars from the poor Tunisians?
And how can a child starve in Yemen if their land is the most fertile land in the world?
Why would Iraqi brains leave Iraq in a country that makes 110 billion dollars from oil export?
Why do the Lebanese fail to govern one of the tiniest countries in the world?
And what made the Arab states start sinking into chaos?

On May 14, 1948 the state of Israel was declared. And just one day after that, on May 15, 1948 the Arabs declared war on Israel to get back Palestine. The war ended on March 10, 1949. It lasted for nine months, three weeks and two days. The Arabs lost the war and called this war Nakbah (catastrophic war). The Arabs gained nothing and thousands of Palestinians became refugees.

And on 1967, the Arabs led by Egypt under the rule of Gamal Abdul Nasser, went in war with Israel and lost more Palestinian land and made more Palestinian refugees who are now on the mercy of the countries that host them. The Arabs called this war Naksah (upset).
The Arabs never admitted defeat in both wars and the Palestinian cause got more complicated.
And now, with the never ending Arab Spring, the Arab world has no time for the Palestinians refugees or Palestinian cause, because many Arabs are refugees themselves and under constant attacks from their own forces. Syrians are leaving their own country, not because of the Israeli planes dropping bombs on them. It is the Syrian Air Force which is dropping the bombs. And now, Iraqi Arab Muslims, some of the most intelligent, are leaving Iraq.  In Yemen, the world’s saddest human tragedy play is being written by the Yemenis. In Egypt, the people in Sinai are forgotten. Finally, if many of the Arab states are in such disarray, then what happened to the Arabs’ sworn enemy (Israel)?
Israel now has the most advanced research facilities, top universities and advanced infrastructure. Many Arabs don’t know that the life expectancy of the Palestinians living in Israel is far longer than many Arab states and they enjoy far better political and social freedom than many of their Arab brothers. Even the Palestinians living under Israeli occupation in the West Bank and Gaza Strip enjoy more political and social rights than some places in the Arab World.
Wasn’t one of the judges who sent a former Israeli president to jail an Israeli-Palestinian?!

The Arab Spring showed the world that the Palestinians are happier and in a better situation than their Arab brothers who fought to liberate them from the Israelis. Now, it is time to stop the hatred and wars and start to create better living conditions for the future Arab generations.

[Source: This article is exclusive to Arab News]
Posted by Geronimo at 1:11 PM No comments:

When such news are reported on the BBC, it is not good for us

Posted by Geronimo at 4:24 PM No comments: