The new explosive report on Altantuya by Al Jazeera.

And this is the reply from the Prime Minister's Office.
Posted by Geronimo at 12:43 PM No comments:

Remembering the loved ones who were lost 14 years ago. 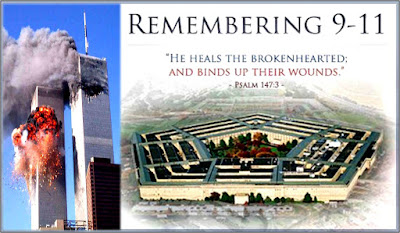 Email ThisBlogThis!Share to TwitterShare to FacebookShare to Pinterest
Labels: Rememberance

UNBELIEVABLE! Not since 1969 -- 46 years ago -- has there been cause for such concern! How exactly are the staff of shops, restaurants etc, all over the Bukit Bintang area, to react to this worrying state of affairs. These folks are ordinary wage earners, who have to show up for work even if they are scared. Who would not be scared given the brazen and poorly veiled "threats" flying fast and furious across social media, as they were meant to by those who put them out there?
"For security measures, we request all tenants with street front access from Jalan Bukit Bintang to keep the door locked on that day...our mall has an emergency plan in place for civil disturbance. If activated, the mall will be closed temporarily for safety purposes and an evacuation exercise may take place, if deemed necessary." 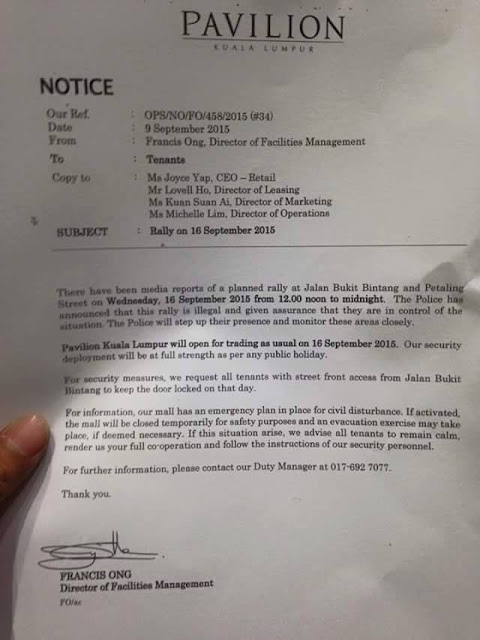 Furthermore, anyone who do anything stupid on 16th Sept 2015 will cause the economy to collapse. Look at the US Dollar. If there is mess on 16th Sept 2015, on 17th Sept 2015 it will be RM5 or RM6 for 1USD.  Foreign investors already pulling out. Bolehland is doomed.
Posted by Geronimo at 9:44 AM No comments:

The Red Shirt vs Bersih 4.0, who is the ultimate loser?

My apology for being away for quite a while as I was on out-of-town assignments as well as coming down with a flu/fever and a sore throat which took me a week to recover.

Now the at the worst is over, let's see what is happening or going to happen in our country.

Ah yes, the Red Shirts planned demonstration on September 16 as a counter move to Bersih 4.0 which saw an overwhelming response of almost 500 thousand participants.  Not to be outdone, they were confident that one million would show up for their cause, but so far, well, your guess is as good as mine.  Quite frankly, I don't believe it is the 'upholding of Malay dignity' which is the rallying call but rather the kiasu syndrome in them that they did not want to lose out to Bersih.  As usual, the Chinese were made the scapegoat despite the fact that Malays contributed about 40% of the total, especially on the second day.  No, no, no, it has to be the Chinese fault and along with it, DAP was dragged into the fray for organising the event.  I bet Uncle Lim must have been left in a bewildered state, "Now what did we do?"  We all know that Bersih 2.0 comprising of various fair-minded NGOs was the one who organised the event.  I can see their warped thinking.  Even if there were 51 Chinese and 50 Malays, they would still say that the gathering was predominantly Chinese *face palm*.

Okay, point of contention.  Let me rebut this statement as perceived by the pro-UMNO NGOs, "The Bersih 4 rally has been branded by its critics as a demonstration dominated by the Chinese to challenge the political power of the Malays." The real fact is that the so-called domination of the Chinese during the recent Bersih 4.0 rally was not by design, but by chance. Every Malaysian wanted to attend and they did not knowing whether there would be more Malays, Chinese, Indians, Ibans or Kadazans dominating the rally. The same feeling applied to Bersih 1, 2 and 3.

Due to some reasons which I do not wish to speculate, many Malays did not turn up on the first day but on the second day, they turned up in full force, some say making up to 40% of the total participants in the rally. If it was by design, how was the organising committee going to ensure that more Chinese turn up compared with the Malays. By the sheer size of the response, it would be a humongous task. If a Malay wants to join the rally, is Bersih 2.0 going to tell that he/she could not be there as it was an all Chinese affair? This must be madness. So, these pro-UMNO NGOs are just barking up the wrong tree psyched up by the likes of Utusan Melayu. Secondly, what is this utter nonsense about challenging the political power of the Malays.

This is a democratic country, and if UMNO want to remain in power, they just simply have to perform. The political power is slowly being destroyed by UMNO itself and the vociferous remarks made against the party by its own members is proof enough without the other races chipping in. If this is the attitude adopted by these NGOs, then we might as well change the federal constitution to ensure UMNO rule forever. I dread to think that should Pakatan win the GE14, these people might just go berserk still not able to grasp the fact that a change is necessary if the present government is not living up to its trust.
Posted by Geronimo at 5:03 PM No comments: