Tajuddin Abdul Rahman may have 'slapped' up a storm 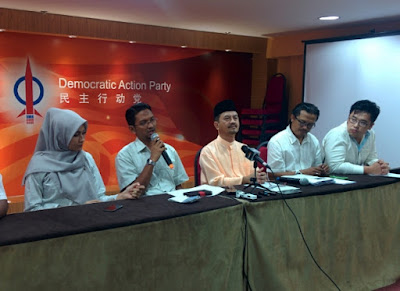 Umno’s Datuk Seri Tajuddin Abdul Rahman should carry out his promised threat to slap an ethnic Chinese if he is willing to face the consequences, Taman Tun Dr Ismail DAP member Zulhazmi Shariff said today.
In the wake of the interracial storm, Zulhazmi told the deputy agriculture and agro-based industry minister to be mindful of his influential position as the people will hold him to his promises.
“My personal stand, I ask that he slap first. Don’t just talk, slap first, then we’ll see what happens,” the DAP man challenged Tajuddin in a news conference here.
Zulhazmi called on Tajuddin to rein in his personal sentiments if he wanted to be seen as a “leader and as an administrator”.
Also at the same news conference was Pahang DAP chairman Tengku Zulpuri Shah Raja Puji, who called on the Perak mufti to advise the Pasir Salak MP on the dos-and-don’ts as a Muslim leader.
Yesterday, Tajuddin was recorded by news portal Malaysiakini as issuing a warning to Chinese Malaysians that they were asking to be slapped for complaining about issues in the country to a third-party, ostensibly in response to the aftermath of last month’s “red shirt” rally that prompted China’s ambassador to Malaysia to comment that Beijing would not hesitate to speak out against any threat that may affect the country’s ties with Malaysia.
“I want to warn the Chinese Malaysians, don’t think when you have a problem, you want to complain — just a little bit also complain — that there will be people to protect them.
“Nak kena lempang macam itu,” the deputy minister was quoted as saying.
Earlier today, MCA also said that it will issue a formal protest note to Barisan Nasional and was also seeking an apology from Tajuddin as the latter’s statement had “seriously” insulted the Chinese community.
However, Tajuddin has since accused Malaysiakini of misquoting him in its article, which had translated the Bahasa Malaysia portion of his remarks to mean that he was threatening to slap the Chinese.
[Souce: MMOnline]
Posted by Geronimo at 6:33 AM 5 comments:

This is truly UMNO politics 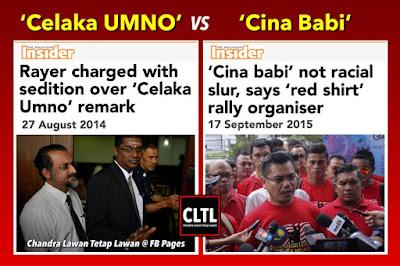 I hope our dudheads know what they are doing ....

So, the China Ambassador to Malaysia, H E Huang Hui Kang, has been summoned to appear at our foreign ministry office today to explain for his presence and the statements made by him during his recent visit to Petaling Street.  Knowing these dudheads, they might just screw up the meeting. As a reminder ... 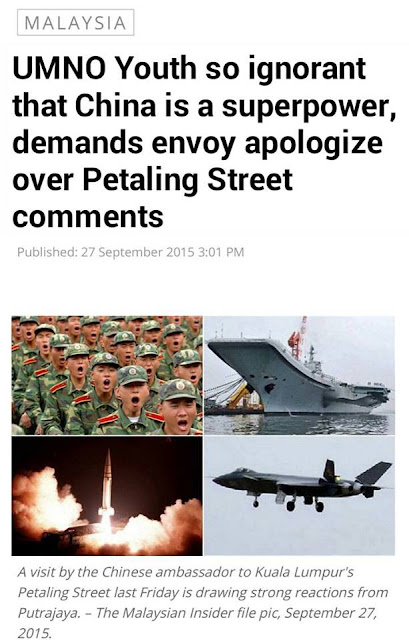 The nation must thank Jibby's servant, Jamal Yunus, for adding another feather in Najib's cap.  Already with local lawsuits, foreign media jabs (with evidence), the haunting of the Altantuya's murder, Sirul's revelation; UK, Swiss, USA and French enforcement investigations, and now ..... CHINA??  This guy truly must be having a death wish of sorts. 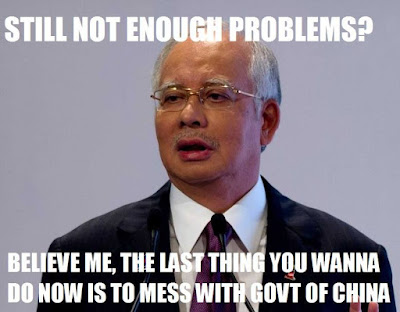 Street demonstrations should not be repeated as they are not Malaysian culture", so said Deputy Prime Minister Datuk Seri Dr Ahmad Zahid Hamidi. Helloooo ..... Malaysian street demonstrations against the government of the day were not the brainchild of Bersih, DAP, PKR or PAS. Rightly or wrongly, it was you people in UMNO who started it when you demonstrated against the British proposed Malayan Union, but then we added colour to it that's all, and you guys followed. 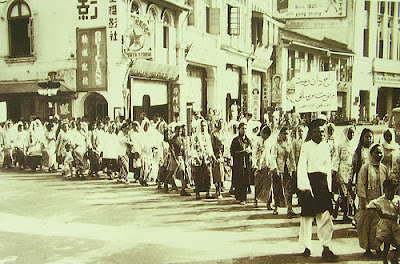 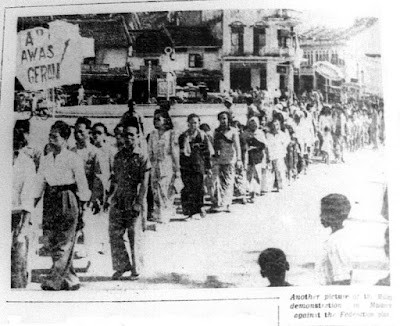