1) ANUAR B HAMID - An ex-Armed Forces major (retired), an UMNO member of Sungai Air Mendidih branch in Merbok division, frustrated with Umno after Dr. Mahathir left the party sulking. He was also responsible for closing down the Sungai Air Mendidih Umno’s Hall.

3) KHAMIS B AWANG - An UMNO member of Sungai Layar branch in Sungai Petani.

I somehow or other smell a rat/s here. These fellows must be under the sponsorships of their respective parties so as to reduce the number of votes for Pakatan Rakyat. How else can you explain, for the first time in Malaysian history, that a record or 13 political aspirants vying for one seat.
Posted by Geronimo at 8:47 PM 1 comment: 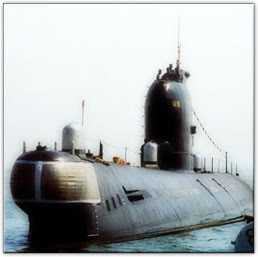 Someone asked me a while back what in the world would a country like us have the need for submarines? Putting aside the questionable dealings which has now put our new prime minister in a not so good light, I personally feel it was a bad decision to have such military heavyweights in our arsenal. For a start, the seabed of our Straits of Malacca is far too shallow for the submarine to maneuver submerged. Assuming that we are at war with Singapore, their destroyers can easily pick us off like flies on the wall, one by one with their depth charges.

During World War II, after Hitler had unleashed his wolf pack which caused considerable losses to the Allies, the British developed the depth charges to take the wolf pack out. Whenever the depth charges are thrown into the sea, the submarines would quickly take deep dives of several hundred feet below the sea to avoid being hit by the depth charges. So, what I would like to know is, did we do a simple test like depth charges vis-a-vis deep dive. Maybe the MOD would like to provide the rakyat an answer as to how they came about their justifications to purchase the scorpeon submarines.

Our territorial waters on the Straits of Malacca side would not be much as we have to share the straits with Indonesia. In other words, before they could dive after leaving port, they would have already entered Indonesian waters. So whether it is for defence or attack, the submarines would be immobilised by inadequate space.
Posted by Geronimo at 3:56 PM 1 comment:

Posted by Geronimo at 3:34 PM No comments:

1Malaysian and its potential failures

So now Najib wants to embrace the 1Malaysian concept. Before he goes any further, can we know what had happened to Wawasan 2020 and the Wawasan Schools which were supposed to be visions in bringing the rakyat together via development and education? Besides these two, there were many other similar campaigns, but it is so apparent that none bore fruits as the schism among the various races grew wider each day. Perhaps I can suggest to the new prime minister some ways where he can see his 1Malaysian bear fruits.
1. Disband all racial political parties so that there will be no identification by race.
2. All official government borangs should do away with the 'Bangsa' query. We are already Malaysians. Heck why do we need to know the race?
3. Do away with the NEP so that all races can enjoy the fruits of the land together.
4. Do away with enrolment quota into local universities.
5. Promote non-Malay military personnels to higher ranks when it warrants.
6. Do away with the 'Ketuanan Melayu' slogan. Instead replace it with 'Ketuanan Malaysian'.
7. After 37 years, the teaching of Bahasa Melayu in schools to bring all races together have proved to be a failure. I suggest that we return to all subjects in English with a compulsory pass in Bahasa Melayu. Back in the 50s and the 60s when all races received their education in English, not only was our standard acknowledged as one of the best, it also brought the races together. So why reinvent the wheel when it was not broken?

So to the new PM, let us see you walk the talk. Otherwise potential failures await you.
Posted by Geronimo at 9:47 AM 1 comment: