I found this in the comic section of a newspaper today. 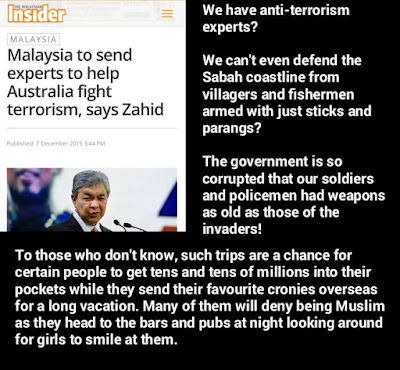 Posted by Geronimo at 8:21 PM No comments:

What will it be like at the UMNO AGM?

Is UMNO as democratic as Najib wants us to believe with all this paranoid activities???  More realistically, UMNO is turning Najib to become a dictator by weeding out all the anti-Najib attendants of this AGM!!!!

Quote:
Just a reminder. Tan Sri Muhyiddin is organising his own gathering on the 7th December 2015 at 8:30 PM at the Dewan Kelab Sultan Sulaiman at Kg Bharu. Every Malaysian is welcome - tak kira your race, religion, political affiliation etc. It is time to close ranks. Show solidarity.

Plenty of coffee shop talk about the Perhimpunan Agong UMNO that begins on the 8th December 2015. It also depends on which coffee shop.

Here is a gist of the points floating around in one or two coffee shops. (If you have heard more things, please send in your comments. Thank you).

1. Only the president will talk. So far the deputy president (TSMY), one vice president (Shafie) are not allowed to speak. It will be a rubber stamp perhimpunan.
2. Delegates are being screened carefully. Only the extreme brown nosers will be allowed in. Speeches have already been screened. Cannot deviate from the script.
3. And get this folks, to make sure no one else gets into the proceedings, there will be different Security Passes issued everyday. This is really paranoid. This has never happened before. (May I suggest that the delegates be X-rayed before and after every session. Because aliens may abduct them in between and do bad things to them.)
4. Johor MB Khalid submitted a list of speakers and topics. All have been rejected. Khaled Noordin's choices are considered too risky. Huge parts of Johor UMNO are now considered 'enemy of the party'. And UMNO was founded in Johor.
5. Tun Dr Mahathir will attend the assembly. There are rumours that some people will boo Tun Dr Mahathir. Even to think of doing such things signifies that UMNO is already dead. If they boo the Moron instead, UMNO has a chance to live.
6. The 1MDB and the RM2.6 Billion donation are taboo issues. There will be absolutely no discussion or mention of the 1MDB or the RM2.6 Billion allowed at all.
7. The president's speech is going to focus on one big item : Cium b*nt*t. This shall be the main thrust of his speech.
The angle is kalau tak cium b*nt*t president, then tahun ini banjir akan lagi teruk, lebah kelulut akan jadi bisa balik, air pasang tak akan surut, Sungai Pari akan mengalir ke hulu,ekonomi Melayu merosot, no Malay unity, BR1M endangered, tambang LRT akan naik lagi, tambang ERL akan naik lagi, Tol akan naik lagi, Melayu akan kalah kuasa politik bla bla.
The main focus is just one line : 'Mesti cium b*nt*t presiden.'
7. It looks like PAS will be mentioned. If so it will be the first time that PAS will be mentioned in a Perhimpunan Agung as possible UMNO partners. That shows exactly how ridiculous UMNO has become. Talk is Bawang and Jin have already got their gold dinars. < Unquote>

[Source: Malaysia-Chonricle]
Posted by Geronimo at 8:12 PM No comments: