Loretta Lynch, the lady who publicly reported on the 1MDB scandal. Who is she?

The Attorney-General of the United States, Loretta Lynch is a graduate from Harvard Law School whereas, Apandi , the Malaysian AG is a third-grade law graduate from New Zealand -what a difference!!!

Lynch graduated from Harvard Law School in 1984. She then practiced law in New York and became a federal prosecutor in 1990, rising to become head of the Eastern District office. She later returned to private law practice, until she again became the top district prosecutor. From 2003 to 2005, she served on the board of the Federal Reserve Bank of New York.

On November 8, 2014, President Barack Obama nominated her to succeed Eric Holder as Attorney General.[1] On February 26, 2015, the Judiciary Committee of the United States Senate confirmed her appointment by a 12–8 vote, with all Democrats of the committee and three Republicans in favor.

On April 23, 2015, Lynch was confirmed by the Senate by a 56–43 vote, making her the first African-American woman and the second woman to be confirmed for the position. She was sworn in as Attorney General on April 27, 2015, by Vice President Joe Biden. [WIKIPEDIA] 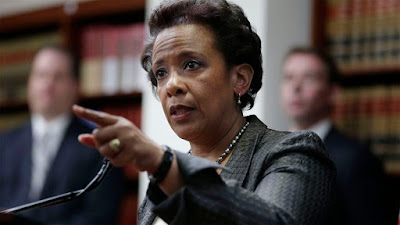 Email ThisBlogThis!Share to TwitterShare to FacebookShare to Pinterest
Labels: Legal