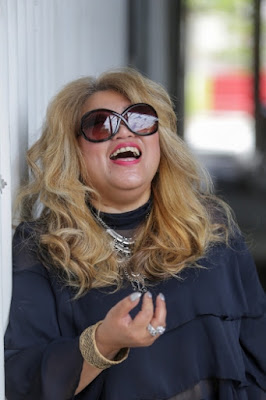 Siti Kasim is one of the few Malay-Muslims who dares to speak out against hudud and what she terms “man-made” laws.
But the 53-year-old litigation lawyer, with her dyed blonde hair that she has had since she was in her 20s, tells me that she’s not a hero, even though a video and news of her flipping the bird to rude hecklers at a recent forum about PAS’ Shariah Bill has gone viral.
She jokes instead about how she would have “dressed to the nines” if she had known about the video.
Siti, who is co-deputy chair of the Bar Council committee on Orang Asli rights, also frequently champions for the indigenous community on land issues. The activist, who describes herself as more of an “on the ground person”, visits the Orang Asli community in Kelantan once a month to find out about their concerns and to get lawyers to represent them.
Not only does she do Orang Asli work, she also helps a group of Rohingya refugees manage their rented accommodation at a shoplot in Selayang as they can’t communicate with their landlord.
Siti, who has a 26-year-old daughter, spent 17 years in the UK from 1987 to 2004, during which she studied law at the Queen Mary University of London.
Vivacious, outspoken and unapologetic, Siti talks about how she deals with criticism, the sacrifices she makes for being opinionated and her dislike for former deputy prime minister and ex-Malaysian Islamic Youth Movement (ABIM) leader Datuk Seri Anwar Ibrahim.
In her own words:
I’m born a Malay. I’m a Muslim. It will affect me if I don’t speak up and wait for others, until when? So I have to do it, at the expense of my family who are also upset with me. My siblings are very unhappy with me. They get all these WhatsApp messages from other people, not to them specifically, you know we’re all in group group kan. Saying stories about me being a murtad, all the made-up stories, they viral it through WhatsApp.
They feel it’s an embarrassment, people kutuk-kutuk I dalam WhatsApp, and they’re in that group. So I try to explain to them. Of course, they’re just normal Muslims. They don’t want anything bad, biasalah, orang Melayu kan, malu. I understand their concern and all that, I try to explain to them. I love my family. My daughter supports me.
I discovered there is no requirement to wear tudung in the Quran. But now, tudung is the first precursor to be a Muslim. You don’t wear tudung, you don’t have the right to speak. Where does this come from? Muslims here have been taught what kind of Islam? Go back to the Quran. Read it. There’s no such thing as “kepala”, the word “head”, in the Quran, Surah An-Nisa. This kepala is added by the translators... breasts are specifically mentioned in the Quran... God says cover your breasts.
When he [Anwar Ibrahim] got caught, I can tell you I was the happiest person in London. I’m not joking because I think Malaysia was safe at that time. But then unfortunately, of course, the people have already been brainwashed by then. He already set in place this brainwashing in school. I blame it on him, he’s the one who brought in Islamisation to Malaysia. It’s nothing wrong to bring in good things, but he’s bringing in Wahhabism kind of Islam. This is where it’s not right. Why you want to bring Wahhabism interpretation of Islam? Because they mix the Arab culture into Islam.
Preachers are human beings as well. Who are they? They’re not God. Some of them can’t even read Arabic words.
They call me “makcik”, “perempuan tua ni”, calling me all kinds of names lah, “makcik tua ni”, “kubur kata mari” or something like that, [criticising] my blonde hair, my not wearing tudung. They took out pictures—I wear sexy clothes with my shisha and all that—they pick up from my Twitter before. Eh hello, I’m not stupid okay. Anything I put up on social media is because I like those pictures. They want to use that as a tool to shame me. If I see that, I say thank you very much for uploading that again because that’s one of my favourite pictures. Lepas tu, mereka tak tahu nak cakap apa.
I have a loud voice, I don’t yell. But during that forum, I had to raise my voice because they were heckling so loud. What gives me the courage? I don’t know, I don’t think it’s because of courage or being brave or what. I wasn’t mad. To be honest, I wasn’t even angry or anything. I just find that they’re stupid, you know. So I want to show their stupidity.
I am a human being. If I say that I don’t get hurt, I’m lying. Of course I get hurt, but luckily I’m the type — so what. My friends support me... all the good comments actually compensate for the bad ones.
They forget I’m speaking up for them also, you know. They don’t understand that. Yang pakai tudung ni kan, you can see a lot of them pakai tudung but actually wearing very tight, tight pants and all that — they don’t realise that if we allow these Islamists to actually control you, it will become like Acheh. The women are the ones who will suffer most. These people forget that I’m trying to uphold their dignity in the future.
I’m not surprised by the prejudices shown by the public now. That’s why I take it in my stride. It’s the way people are being brought up, to be judgmental. That’s how I see it — they can’t help it. Once they get to know you, they realise it’s just you. You’re not trying to grab the limelight or trying to pretend, or trying to speak about something you don’t know about.
[Source: MMOnline]
Posted by Geronimo at 1:39 PM


Re-live the guitar music of 60s